Today a guest post from child/adolescent psychotherapist and educator Collett Smart. Collett is pleased to introduce Collective Shout's new initiative, Youth Shout Out. Collett also writes about children, adolescence and everything inbetween on her blog, The Tween Factor.

Many of the young people we have met through Collective Shout are just bursting with life and hope for a brilliant future. These youth have plans for their involvement in many humanitarian pursuits, such as helping orphans, assisting women to escape the sex trades and enlightening their peers about the destructive 'raunch' culture they are becoming immersed in.

Young people are finding the current media culture disturbing. They are frustrated with the manner in which it objectifies and exploits women and children as well as normalising pornographic themes. They have begun to notice how these themes are impacting on the mental well being of their friends. This impact on youth mental health has been confirmed by Mission Australia’s ‘National Survey of Young Australians 2010’ (in which 50,240 young people aged 11 to 24 participated). This survey found that the top issue of personal concern was body image.

There are times when we are told that all young people actually choose to engage in this raunch culture and merchandise is marketed to them because it is what they want. We get asked whether we have ever asked the young people themselves if they are offended by the material in the media. A number of the members on the Collective Shout team are involved with and get to speak to young people around Australia each week. It is because of their stories of frustration at this culture and their wish to make their voices heard that we have begun a branch of Collective Shout called ‘Youth Shout Out’.

A group of girls spoke about their frustration that even if they looked away, the images on sexualised billboards were seared into their minds or those of their boyfriends and questioned how that was meant to be free choice for them. They also related how their boyfriends felt frustrated about the manner in which women were portrayed in the media and said that they had to fight the war in their own minds, not to look at the their girlfriends in the same way.

One girl single-handedly took on an ad company at her bus shelter regarding inappropriate images, which she saw young children standing looking at. She told the company in her letter of complaint that she was a student and felt offended by the images. They removed it! This same teenage girl also mentioned that when she and her sister were purchasing something at a newsagent, they told the seller that they would not make their purchase until he moved the Ralph and Zoo magazines away from the Dora the Explorer colouring books. She related that the owner just laughed at them and so they did not make their purchase there. 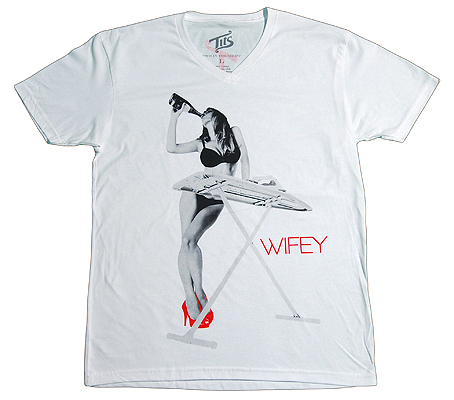 Another enraged student said how much she hated the TITS t-shirts she saw on guys she walked past in malls and felt insulted every time she saw these. This 17 year old girl is planning on creating her art work to represent the way that the media exploits women and uses sex to sell products.

A group of young people in Toowoomba initiated a campaign against City Beach and Roger David for their sexist and degrading tshirts. (including the TITS brand stocked by City Beach) This led to newspaper articles in  The Chronicle and the Sydney Morning Herald. Collective Shout Toowoomba have written about this on our blog.

Here is an example of a letter sent by a 17 year old girl to her local Factorie clothing store:


To whom it may concern,

I am writing in complaint after visiting a Factorie store today. I was shocked and appalled at the practically pornographic and violent images of women displayed on your men’s T-Shirts! I found these images deeply offensive as well as very degrading to women. In selling these items of clothing, Factorie is contributing to the objectification and sexualisation of women. I also believe these images are utterly inappropriate for placement on a T-Shirt as it normalises these explicit sexual images. Once a shirt is sold, the buyer can then wear it anywhere where it will be seen in public view, including in the view of young children! These images are in absolutely no way suitable for children’s eyes! It also sends the message to the future (and current) generation that women have nothing to offer but sexual fulfilment to men, as well as making violence against women seem acceptable. One of your T-shirts displays a woman in a sexualised manor with a gun to her head! As a 17 year old, and a member of your target consumer, I wish to inform you that I will no longer be shopping in any Factorie stores and will be making my family and friends aware of the offensive nature of your products. I am also willing to take this matter further should I receive an unsatisfactory response from you. I look forward to your prompt reply.
Regards,
Kirilyn (age 17)


and this is the reply she received:

Thank you for taking the time out of your day to communicate your experience at one of our factorie stores.

I have passed this information onto the Senior Retail Management and the production team to ensure this matter will be looked into further.

In the meantime factorie has decided to hold any further production of the design on the T-shirt in question.

Again, we appreciate your feedback.


We know that our young people will continue to provide more examples of great activism. We are proud to work with this incredible generation as they speak out and reshape the culture.