Is this how girls take control of their lives?

The November issue of the breast gallery magazine Ralph has attracted a truckload of praise for supposedly going where no lads' mag has gone before: the body of an "average" woman.

The issue features singer and Australian Idol host Rikki-Lee Coulter, who is a size 14.

Ralph's choice of a "larger" woman for its cover has been hailed as enlightened and bold. Bravo Ralph! Congratulations! Average women everywhere rejoice and be glad!

Hardly. What this is about is equality of objectification. It's the pornification of all women under the guise of equality of treatment. 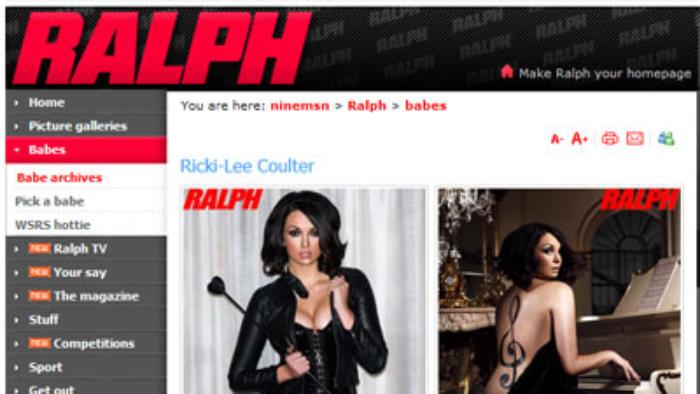 Ralph makes out that what it has done is just so daring and transgressive, when really it's the same old objectification, dressed up in a size 14. The only novel aspect is the brazen pitch that the shoot is some remarkable achievement for body acceptance.

Says Rikki-Lee, "Real can still be totally beautiful and totally sexy and I'm hoping men around Australia will see that!"

Hearing Rikki-Lee (or Ralph's copy writers) say, "I love my big booty the most!" seems more designed for salivating male readers than for women struggling to accept their bodies in a culture that makes them feel they can never be good enough.

And how "real" are the images anyway? Don't tell me they weren't touched up.

Rikki-Lee appears on a cover which includes headings like "50 best butts" and "We date a sex doll."

Stop it already - how much enlightenment can a girl take?

Here's some more progressive gems for the advancement of women, from Ralph's website. Regarding another well (if not naturally) endowed model:

"One lie we like to tell our mates down at the pub is that, after she saw our August 2008 issue, the hottie was inspired to get around topless more."

Big Brother graduate Krystal, whose artificially constructed breasts appear regularly in Ralph, is pictured with two other girls in microscopic bikinis. Asked about wardrobe malfunctions, Krystal replies: "There always are. They put us in child-size swimsuits, so it's inevitable."

Kimberley appears in The Strip, a feature about meter maids with Guinness-book-of-world-record wedgies. Asked about what role she plays, she says: "I just walk beside Ashleigh in my bikini and smile. I'm an extra meter maid." And Sharna, what does she do? "I just look pretty. No speaking, just looking pretty. That's easy for me."

Looking pretty in bikinis. Not saying much. Really that's all girls need to do. And be drooled over. "I need a bib to stop myself from dribbling on my shirt!!" says one reader about a certain model. "I'd like to milk her", says another.

This is how girls take control of their lives?

At one point, the man (Daniel Conn from the Gold Coast Titans), is struck in the head. Not even rugby league players deserve that.

It is all part of the eroticising of violence. And it also perpetuates the myth that women are just as violent as men, which is false, further masking the real source of violence against women and children.

Busty vengeful female into S&M: rather than smashing any stereotypes, Rikki-Lee has been turned into a cliche.

As Rosalind Gill has written, the image of the revengeful woman is one of the dominant figures of fake female sexual self-empowerment.

For these magazines, the sexual objectification and degradation of women is all just a bit of fun, just entertainment, LOL. Women are represented as enjoying their own objectification.

The idea that women are empowered by quasi-pornographic photos of a larger women is patronising - to all women, of all sizes, everywhere.

As published at ABC.