Isuzu Ute Australia is holding an “X rated” competition to promote a new model Ute. Displaying the the text “The New “XRated D-Max” Isuzu is offering “5 hot nights”for “you and three mates” as the prize. Advertising imagery and associated text makes it clear that this prize amounts to sex tourism. 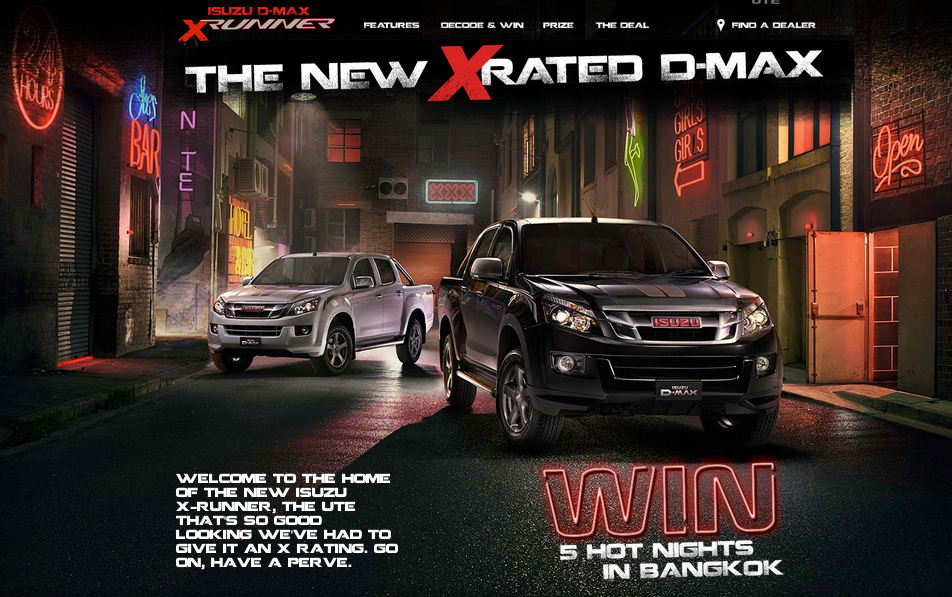 Welcome to the Home of the new isuzu x-runner, the ute that’s so good looking we’ve had to give it an x rating. Go on, have a perve.”

Thailand is widely known to be a hot spot for human trafficking and child prostitution. It hosts Asia’s largest sex industry and it is common to see white men walking the streets with young asian girls.

According to humantrafficking.org , Thailand is a source, transit, and destination country for human trafficking. Bangkok is a hub of sexual exploitation of women and children in the Greater Mekong sub-region.

And yet Isuzu describes this prize as ”the trip-of-a-lifetime…taking in all the Thai capital has to offer.”

It is estimated that 250,000 Western male tourists visit Thailand every year for the purposes of sex tourism. We should be absolutely ashamed that 32,500 of these are Australian men.

This is worth repeating – despite widespread community outrage about child sex abuse, and condemnation for those who commit such abuse, an estimated 32,500 Australian men visit Thailand every year to purchase women and girls for sex,many of whom are in conditions of sexual slavery. Many of these girls entered the sex industry unwillingly and were trafficked as children.

Unless we eliminate men’s demand for the bodies of women and children, we will never see an end to human sex trafficking. It is not acceptable for Isuzu to encourage such demand among its customers.

Men and Women we invite you to take a stand against sexual exploitation and sex trafficking.  Isuzu must cancel the competition and withdraw its “X rated” themed advertising immediately.

In response to our petition Isuzu has agreed to remove its “x rated” sex tourism competition.

More than 1000 people signed the petition in the first 24 hours. In the end we received a total of 3608 supporters. Click here to read more.

The Social and Reputational Damage Caused by Western and Aussie Sex Tourism in Thailand by D. Martin & S Jones