Makita tools sexist ads - It's worth speaking up

Ryl's experience and persistence with challenging Makita power tools on sexist advertising in their catalogues has shown results. Makita now appears to be stepping  away from using sexist imagery in their advertising, although they’re not quite there yet. Read on to see how Ryl went about challenging Makita and what you can do to help. We agree with Ryl, it’s worth speaking up. 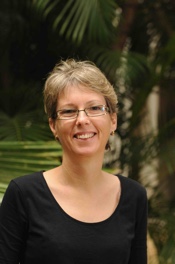 My name is Ryl Harrison, I am a busy mum of two school aged kids living in North Queensland.

I am currently doing a PhD looking at women’s experiences of mothering girls aged between 9 to 13 years with a focus on sexuality.   I often contact corporations about sexist advertising practices – I think it’s worth the effort!

Makita Tools has made a lot of progress over the last few years in the way they represent women in their advertising.  Only five years ago they were still publishing their super sexist trade magazine “Grip”; the intelligence insulting rag full of blokey blokes referring to women as babes and chicks, complete with real ‘pin up’ women.   In 2008 Makita’s annual Toolbox catalogue was launched with a whole new marketing slant – real women had been replaced by the super sexy cartoon woman ‘Electra’, complete with details of her ‘vital statistics’.

In response, I emailed them the following letter:

Just got my 2008 toolbox catalogue in the letterbox, you must be joking!

I can't believe that Makita still thinks that it is OK to use completely sexualised, phallic images of women to sell tools.

Not sure how much you spent on coming up with this sexist campaign, but I think you'd better ditch it before you roll it out, I don't think I would be the only woman in Australia who is offended by this.

You are perpetuating dreadful stereotypes about women and the construction industry.  I'm not sure those who are working with young women to enter non-traditional industries will be pleased by this bad choice.

Bad decision, need to ditch the campaign and apologise in your next edition toolbox.  Get some imagination and get some new marketers.

The email bounced - their filtering would not accept my complaint as I used words such as ‘phallic and sexualised” – ironic really!  So I posted the letter and rang the marketing manager who told me the company thought the sexualised cartoon woman ‘Electra’ was an improvement on using real sexualised women to sell tools; I disagreed and urged them to go back and think again, to show leadership and corporate responsibility.   I also wrote to and called Construction Skills Queensland and our local technical college:  this is what I encouraged them to do:

I am writing to ask that the Australian Technical College take some action in addressing the sexist advertising that is a problem within the Construction industry.

I just received the latest Makita Toolbox catalogue and they introduced

a completely sexualised phallic cartoon character who is the new mascot /brand for their products. I have attached a copy of the complaint I am trying to send to them.

I appreciate they are not the only company marketing in such a way, but as this is a new campaign I think it is worth Industry leaders such as yourselves making a formal complaint to them, as well as raising the wider problem of sexist advertising in other forums.  I understand that your college has a significant number of women in non-traditional industries and clearly this type of advertising is not supportive of them being treated as equals within the industry.   I myself work within the construction industry and I am outraged at this type of stereotyping.

It would be ideal to mobilise unions, industry leaders and construction workers themselves to say “this is not ok”, when companies like Makita realise their campaigns are negatively received by the market, they change them.

In addition, I let other women know what I was doing and they also wrote to Makita.  I’m not sure if it was because of all this but in 2009 Makita only placed Electra in the Toolbox catalogue once in a very small photo and by 2010 they had decided not to feature her at all in their magazine – she’d been replaced with a very ordinary kangaroo in overalls!

Although Makita have obviously decided that using women, real and cartoon, as pornography in their advertising is not the smartest idea, they still have one more step to take.  The “Team Makita”  (www.teammakita.com.au) section of their website, which you need to be a member to join still features this image.

Yeah right – all the women I know working on construction sites wear bikinis and steel caps; or is this just what Makita encourages men to visualise when they are working with their female colleagues?

If you go to www.makita.com.au there is a ‘contact us’ tab where you can congratulate them on their progress so far and encourage them to demonstrate real ‘teamwork’ by treating women with equality and not as some sexualised decoration in this ‘members only’ -  or is it ‘boys only?' - ‘Team Makita’ section.