Grassroots campaigning movement Collective Shout is calling on schools to be alert to the Lingerie Football League recruiting underage girls and to refuse to host practices or events on school premises.

The move comes after yesterday’s news piece which reported that an Adelaide school was hosting Lingerie Football League practices on their school oval while young students looked on. 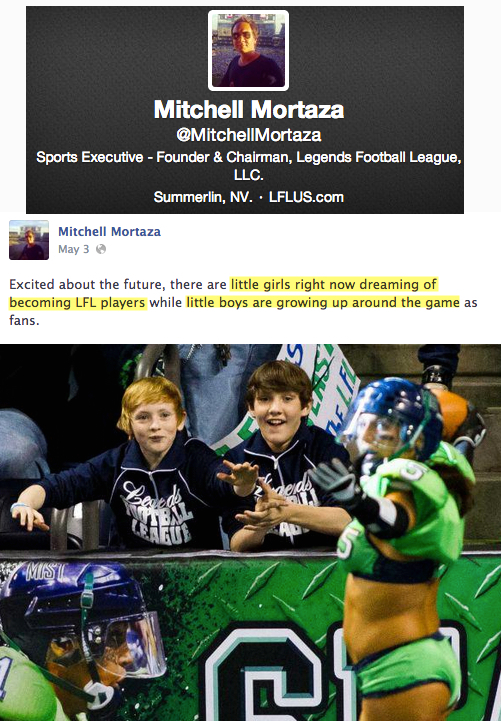 Collective Shout has been campaigning against the Lingerie Football League (recently rebranded as Legends Football League) for several years.  In December they called on Channel Seven to drop televised games, with the station indicating earlier this year they would not be continuing to air the ‘sport.’

The anti-‘sexploitation’ movement criticized what they describe as “exploitation of female athletes” who are required to forego traditional protective uniforms for bikinis, to sign contracts agreeing to ‘accidental nudity’ and to risk fines should they attempt to wear any additional clothing.

One of the organisations activists Deborah Malcolm reported on the league’s Sydney game in 2012, where a player lost her bikini bottoms and the ordeal was replayed on the big screen as the crowd (mainly young university aged men) went wild.

Campaigns Manager Caitlin Roper said it was inappropriate for any school to be hosting the Lingerie Football League that sent unhealthy messages to students.

“Schools need to be fostering an environment of respect.”

“The message to young students, both male and female, is that women are not to be valued for their skills or athleticism, but for their sexual appeal- that their contribution to society is meaningless if they are not ‘hot’ and willing to strip down.”

Collective Shout condemned the League’s attempts to “prey” on teen girls, accusing the League of trying to recruit young students as future players.

Heather Vogt, principal of the Christian co-ed school, wanted to create a ‘coaching clinic’ for her female year nine students following similar events for boys in previous years. The idea was for members of a local female gridiron team to come to the school to hold a practice session with the girls, encouraging them to think about participating in non-traditional sports.

Unfortunately, when the Adelaide Eagles agreed to send female gridiron players, they neglected to explain to the school that the players in question were from the Adelaide Arsenal, who play for the infamous Legends Football League (LFL). In other words, that the sports women conducting the clinic usually play gridiron in bikinis.