Lynx now include women in their range of products at the "Lynx Lodge."

We already know that Lynx produces some of the most sexist and degrading advertising you can find (or rather - finds you). So I'm not sure why I was surprised  to hear that Lynx is opening a resort called "The Lynx Lodge." 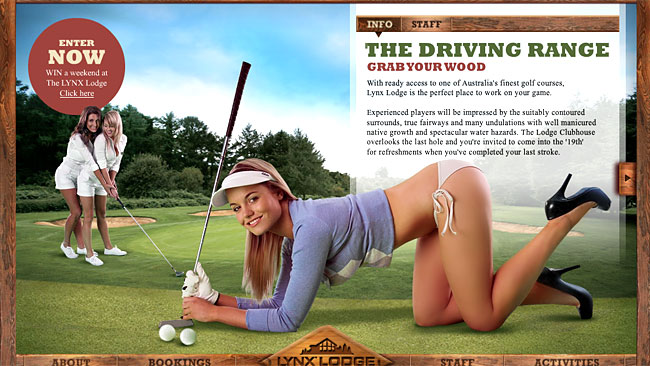 As reported in the Courier Mail:

The Lynx Lodge, set to open later this year in Lake Macquarie, NSW, has been billed as the “ultimate man-cation destination”.

A team of models will make up the “friendly and flexible” lodging staff and will offer on-the-spot back rubs, breakfast in bed and “sexy wake-up calls”.

“From grabbing your wood on the golf course through to getting filthy on a dirt bike, every day at the Lynx Lodge will leave you utterly shagged,” the website states.

Evening entertainment will include mud wrestling and games of Twister.

Lynx is holding a competition to mark the launch of the resort, where the winner will get to stay at the resort with seven friends.

If you're still using Lynx deodorants or buying them for the men or boys in your family, the time to boycott Lynx is now.

*Unilever is the parent company for Lynx as well as a number of other brands. If you choose to boycott Unilever brands, look for this Unilever logo on the label.

It’s not news that Lynx’s revels in degrading representations of women to promote its body spray.

I’ve talked about their ‘Spray More Get More’ campaign which features women transforming into out-of-control-sex-maniacs the second they smell Lynx on a man.

Collective Shout has also exposed the sexism and misogyny of the Lynx brand in a recent post about the ‘Lynx Lodge’.

But what is new is the discovery that Lynx has the support of one of the world’s biggest supermarket chains – Woolworths. Is Woolies to be known as the women-as-fresh-meat people? Read more here.

Contact Unilever here. You might wish to make the following points in your letter to Unilever about Lynx and the Lynx Lodge:

Write to Woolworths about their promotion of the Lynx Lodge

Michael Luscombe is the Managing Director and Chief Executive Officer of Woolworths.

You might choose to make the following points in your letter to Woolworths:

Write to these contacts about the Lynx 'pop up spa.'

Time Out (Where details of the event were advertised)
[email protected]

You might choose to make the following points in your letter about the 'pop up spa':

As always, please post any complaints you send, or responses you receive in the comments section below.