We began hearing from CS supporters about the ad via our Facebook page when it aired on television. We checked out the video on YouTube where it was promoted on the home page. The company's teenage target market are frequent visitors to the site.

We were asked to comment on the ad for the Herald Sun:

The ad, which is full of double-entendres, has been criticised as crass and oversexualised by lobby group Collective Shout.

Co-founder Melinda Liszewski said up to 10 members had lodged complaints with the Advertising Standards Bureau because it was degrading to women and condescending to men.  Read entire article.

Melinda Tankard Reist was also asked about the ad on Melbourne radio 3AW:

Co-founder of Collective Shout Melinda Tankard Reist said she was unsurprised by the tact that "repeat corporate offenders" Lynx had taken with their latest campaign.

"One of their worst ads came out last year where they advised men to use a Lynx product to 'wash away the skank' after a regretted sexual encounter," Melinda Tankard Reist told 3AW Mornings. Read entire article and listen to the interview.

Just so you know, the regretted sexual encounter promoted by the American version of Lynx Axe, was described as one that might involve a disabled or elderly woman. And click here to look at this pro up skirting product brought out by Axe a few years ago. 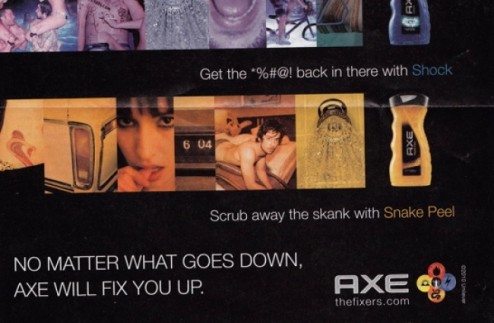 Quoted in The Age and Sydney Morning Herald, Melinda Tankard Reist said Lynx had "hit the Jackpot: it's sexist, ageist and racist."

"(Boycotting) is the only language these morons understand," Dr Michael Carr-Gregg said.

"This is completely inappropriate. (It) just adds to this shadow of pornography that our children are growing up in and I think it's time we really got strict with them."

The suggestion that we are oblivious to Lynx's marketing tactics is somewhat amusing. Some articles have said that we are 'feeding the publicity machine' and that 'Lynx crack open the champagne every time Tankard Reist opens her mouth.'  Apparently we're unaware that controversy sells products and that negative media is all part of Lynx's plan.

Do they really think we're that stupid?

Here's something Lynx may have missed.

Lynx may be advertising deodorant and body wash, but they are also advertising the failure of the ASB to reign in recalcitrant advertisers. Lynx have done this before and they will do it again. They will face no financial penalties for continuing to run ads that are sexist, demeaning and that breach the Advertising Industry code of conduct.

We will keep speaking out because we believe silence has never changed anything and never will. Lynx's latest ad campaign - like their previous ad campaign - highlights the inadequacies of the ASB and demonstrate why an independent body or authority is needed to replace it. Penalties should be put in place to ensure that advertisers cannot use self regulation to do whatever they want.

So thanks Lynx for helping us to make our case for independent advertising regulation in Australia. We will be sure to 'advertise' you at the next government enquiry.

As for Lynx's claim that their ad is 'sharp and edgy' we'll leave the last word to Allison who wrote:

I sat through that ad on the big screen. You could sense every person in the cinema cringing. No one thought it funny at all. My male companion felt embarrassed to be the target of such purile crap & he grew up watching Benny Hill.

Tell Lynx what you think about their ad campaigns

The Ad Standards Board has upheld complaints against Lynx's 'cleans your balls' ad. You can view the determination here.

However, a revised version of the ad is now appearing on television. If you've seen the ad you can make another complaint here:

Why you need to complain to the Advertising Standards Board