It’s not news that Lynx’s revels in degrading representations of women to promote its body spray.

I’ve talked about their ‘Spray More Get More’ campaign which features women transforming into out-of-control-sex-maniacs the second they smell Lynx on a man.

Collective Shout has also exposed the sexism and misogyny of the Lynx brand in a recent post about the ‘Lynx Lodge’.

But what is new is the discovery that Lynx has the support of one of the world’s biggest supermarket chains – Woolworths. Is Woolies to be known as the women-as-fresh-meat people?

Prostitute-like services at the Lynx Lodge 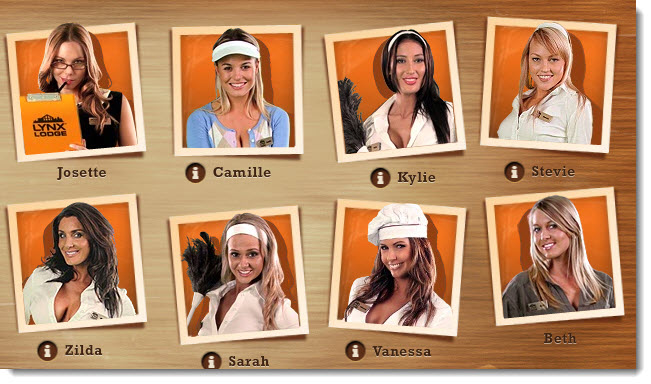 Described as the ‘ultimate man-cation’, the Lynx Lodge appears to be parent company Unilever’s foray into the sex industry. The Lodge seems to have all the trappings of a brothel, without explicitly identifying itself as such. "Lynx Lodge - Get Laid Back" declares the website.

"The ultimate man-cation destination to get you back to your primal roots."

"Get laid back, as lodge staff pamper you with breakfast in bed and on-the-spot massages."

“Pool hall: Scared of being beaten by a girl? Some of our guests quite enjoy it.”

"Ball Games: Teamwork is everything, so be sure to focus on your partner’s backside to make out her block signals.”

The Lynx Effect site presents provocatively dressed women (including in busty maid outfits) ready to do a man’s bidding, entertain and excite him. Emma, for example, is a "great cook" and "can do the splits - what more could you ask for?"

A video ad on the site shows a number of young women lonely and desperate for men to arrive at the lodge. Helpless and passive, they have no man to serve, therefore no meaning in life. One girl takes off her clothes and wades naked into the lake waiting for him to arrive.

Another video shows more women in sexually inviting poses and scenes. While called ‘hospitality staff’, the message is they will provide forms of sexual entertainment. Women are shown in wet t. shirts, borrowing from girls-gone-wild type themes.

Drawing attention to their backsides and cleavage, the men aren't supposed to touch them? What about sleazy jerks who come expecting the girls to get their kit off, and try to grope them? Male visitors are primed to expect compliance, with the models at the ready to cook and serve them breakfast after a ‘sexy wake-up call.’ The Lynx girls are represented as seeking - indeed desperate for - every kind of male attention.

What is in place to protect women from sexual assault at the lodge? Will they have panic buttons? (What about if they're in the boat?) Given that the place is spread out and there are many different activities going on each day, how will a woman’s safety be guaranteed?

Submission: telling her what you want her to do

The theme repeated over and over is that the Lynx Mynx is to be 'told what to do’. Lynx comments on its Facebook pages include:

"The videos get released tomorrow and we'll reveal more Tom... basically imagine a big brother-style house with these girls and you have to vote for your favourite and give her stuff to do...."

"so yesterday we filmed the first things you told the Lynx Mynx to do... it was a lot of fun, video coming soon so watch this space, but here's a couple of pics to give you a little taste..."

"The concept of the Lodge is a play on popular male fantasy, so the girls are there to hang out and ensure Lodge guests have fun," Lynx spokeswoman Laura O'Donnell told the Courier Mail.

She claimed all activities would happen in open public areas and that Lynx security staff would keep a watchful eye on everything. Does that include in the master bedroom where the site promises lodge staff will tuck you in and prepare you for sweet dreams?

In case you didn’t know, the Lynx brand is owned by Unilever which also owns the Dove ‘Real Beauty’ campaign. Unilever is fueling borderline-prostitution of women through its Lynx brand while claiming to care about women’s true beauty and worth.

Trawling for business in Martin Place 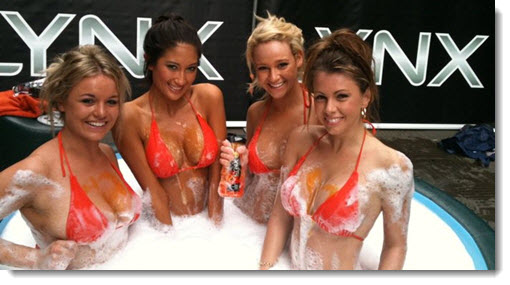 The event was described in 'Time Out Sydney’ this way:

Bikini-clad ladies, steaming hot tubs and on-demand massages sound like your thing? They'll all be on offer at Martin Place for one day only to offer a sneak preview of the soon-to-come Lynx Lodge. The new all-male travel concept, located at Lake Macquarie and set to open in November this year, comes courtesy of the team behind its namesake, lady-wooing antiperspirant.

In the meantime, dudes can dive into one of the pop-up resort's many spas along with a bevy of female beauties, or opt for a stress-relieving back rub from an accommodating hostess. Stop off on your way to work to take part in the ultimate boys' trip draw - the chance for one guy and seven very lucky mates to initiate the first of many man-cations at the Lodge.

Did Sydney City Council have no qualms about approving this event? Were there any objections to offering sex-based entertainment in the middle of the street? Or should we expect to see more of this?

Woolworths gets in on the act

Now we discover that Woolworths is supporting the competition for eight men to be the first to visit the lodge.

"Lynx is holding a competition with Woolworths, where a winner will be the first to stay at the resort with seven friends."

Here’s an extract from Woolworth’s commitment to its customers:

As Australia's largest food retailer and second largest private employer, Woolworths recognises we have a high level of social responsibility, and we take these responsibilities seriously…

As a member of those communities we understand that we have a duty to be more than just a retail outlet, but to also make a positive impact on the societies that we serve. We work to the principle that we can never take our customers for granted – we need to earn their trust and respect and this means acting responsibly both inside and outside our stores.

All Woolworths' businesses are active in the local communities in which we operate...Our partnerships and programs are continually reviewed to ensure they align with broader social issues and community concerns.

How is supporting a view of women as subservient sexual slaves having a positive impact and acting responsibly? Does “high level of social responsibility” apply to the status of women in the community? 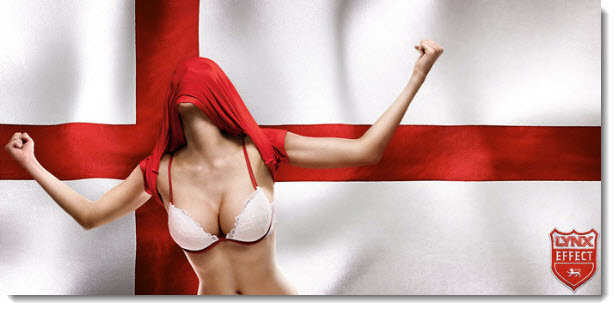 Does this look like one of your fresh food mum’s, Mr Michael Luscombe, Managing Director and CEO?

Comments from men on the Lynx Facebook fan page show the effect of its advertising on them. Women are products to be won, they are ‘it’ or ‘that’ and judged mercilessly.

"you no that you would ruin that all night long"

"she's not that great"

On a pic of Jessica Simpson: "isn't she a whale now?" "yeah she is"

On Scarlett Johannssen: "Scarlet get me a beer "

Lynx asks: "We thought it's time we started talking about those annoying irritations when it comes to the dating game. Her clingy mates, the drunken brother, the barman that ignores you... what else shall we add to the list...?"

Nathan Ireland: "The fat ugly mate that drags them away because she is upset the fittest bloke in the pub (besides us*) does not fancy her hippo-croc-a-pig ass!"

And there you have it, the Lynx Effect, proudly supported by Unilever, Woolworths, Sydney City Council and maybe even Port Macquarie Council.

And even if the lodge is just a marketing ploy and not a real place, Unilever’s contemptuous attitude to women still comes through, loud and clear.

Contact Unilever here. You might wish to make the following points in your letter to Unilever about Lynx and the Lynx Lodge:

Write to Woolworths about their promotion of the Lynx Lodge

Michael Luscombe is the Managing Director and Chief Executive Officer of Woolworths.

You might choose to make the following points in your letter to Woolworths:

Write to these contacts about the Lynx 'pop up spa.'

Time Out (Where details of the event were advertised)
[email protected]

You might choose to make the following points in your letter about the 'pop up spa':