How would you feel if you found out your neighbour had 10,000 images of underage girls wearing bikinis on his hard drive? What if I told you that Instagram hosts collections just like this, serving no other purpose than the sexual entertainment of men?

As Collective Shout has shown throughout its joint global #WakeUpInstagram campaign, the popular Facebook-owned social media platform fails to remove these images when they are reported through Instagram’s in-app reporting systems. Instagram is a purveyor of child sexual exploitation imagery and - despite recent measures aimed at improving safety for minors on the platform - is facilitating the sexualisation and eroticisation of underage girls. 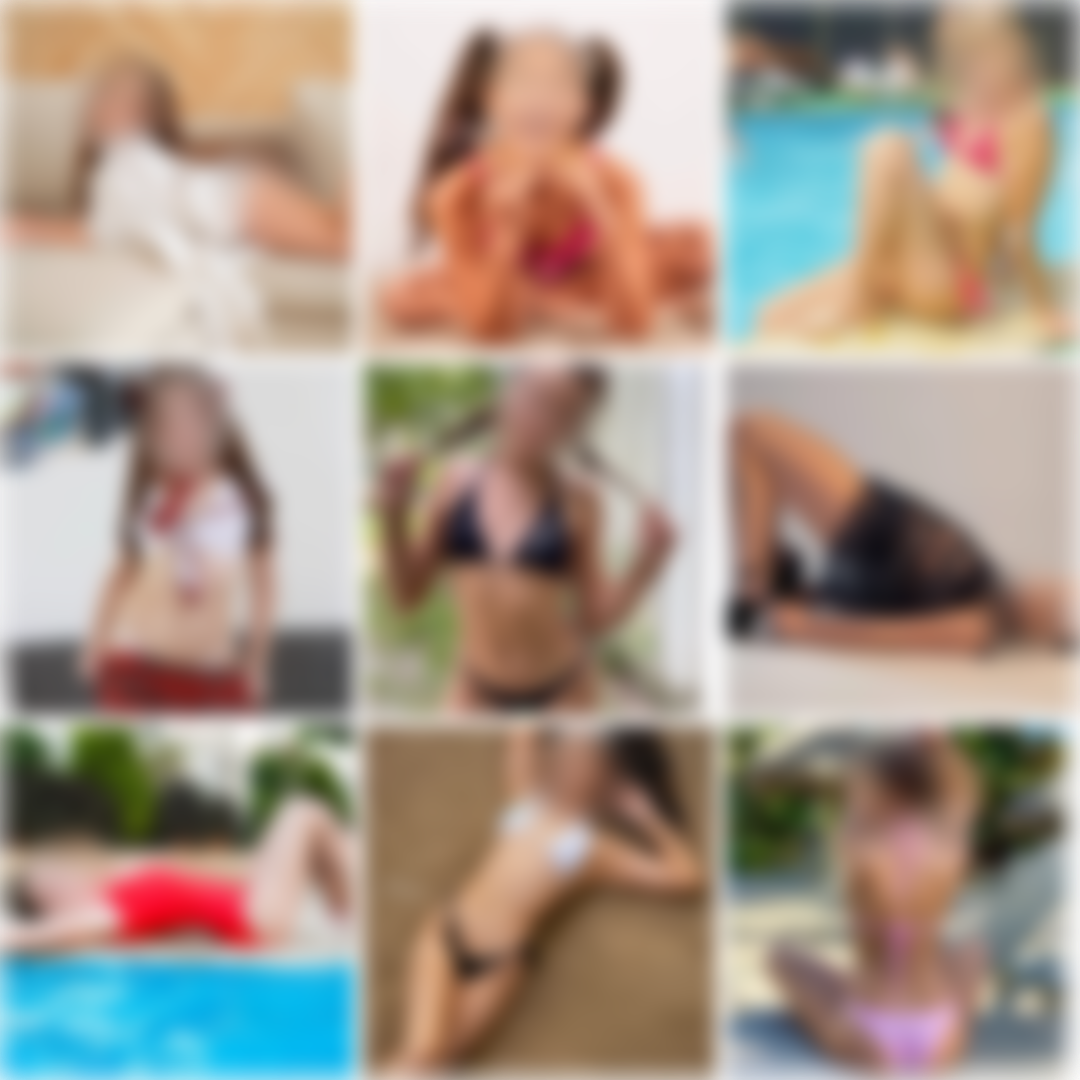 This type of imagery - photographs of (barely) clothed minors in eroticised poses - falls on the commonly used scales that law enforcement officials use to determine the severity of offending when investigating hard drives of suspected sex offenders.  And so it should. There are no good reasons for a grown man to collect images like this, barring a sexual interest in minors. 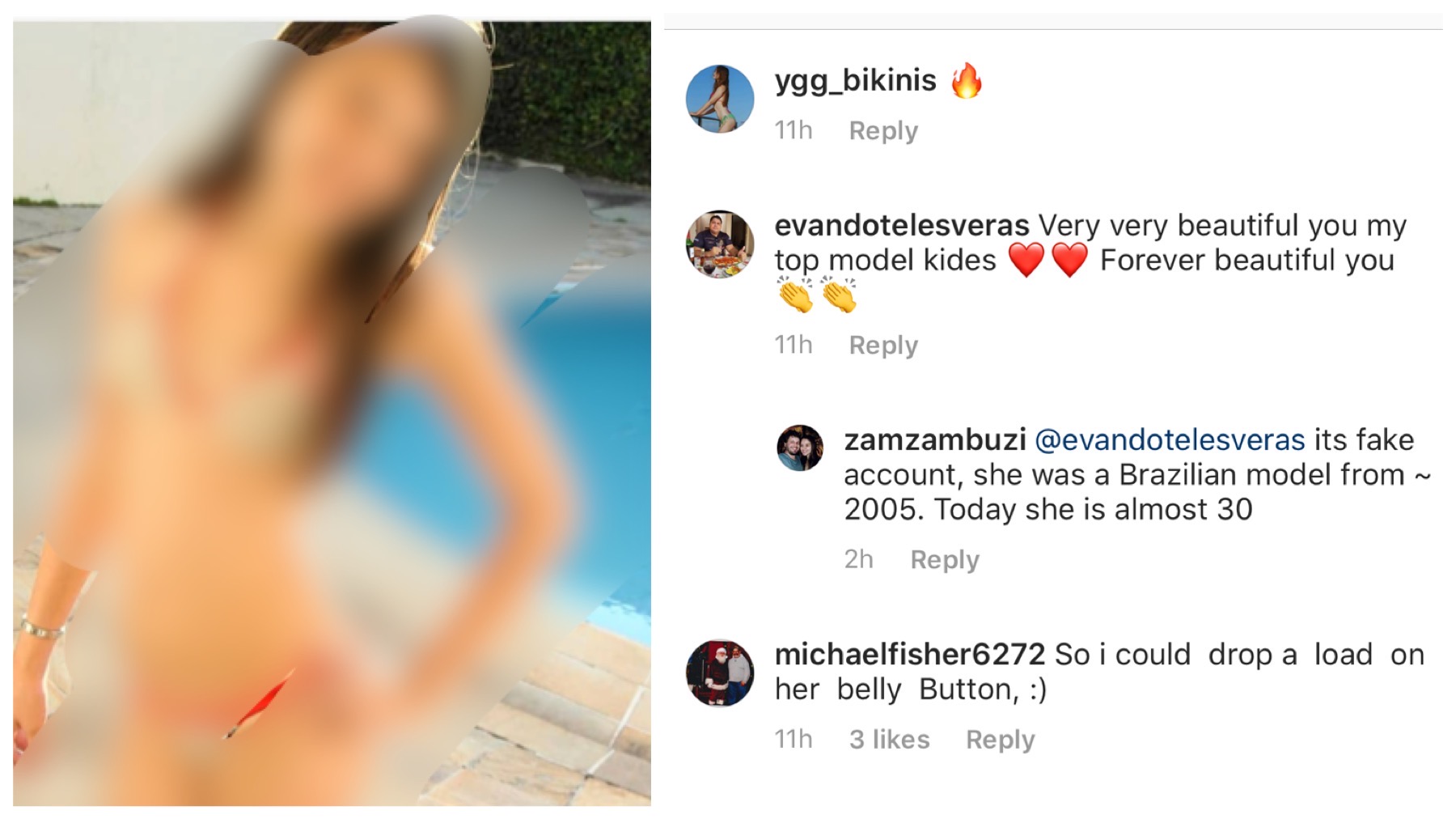 The modelling sets are still in circulation. The difference is now, men don’t have to collect or pay for them. Instagram hosts and serves them up, free of charge. The girls and studios are renowned - evident by comments posted on images indicating model names, ages and studio affiliations, and less specific revelations such as ‘mmmm she’s my favorite’ and ‘the first’. Instagram accounts point users to websites where more sexualised imagery and videos of underage girls - from decades past - can be viewed. 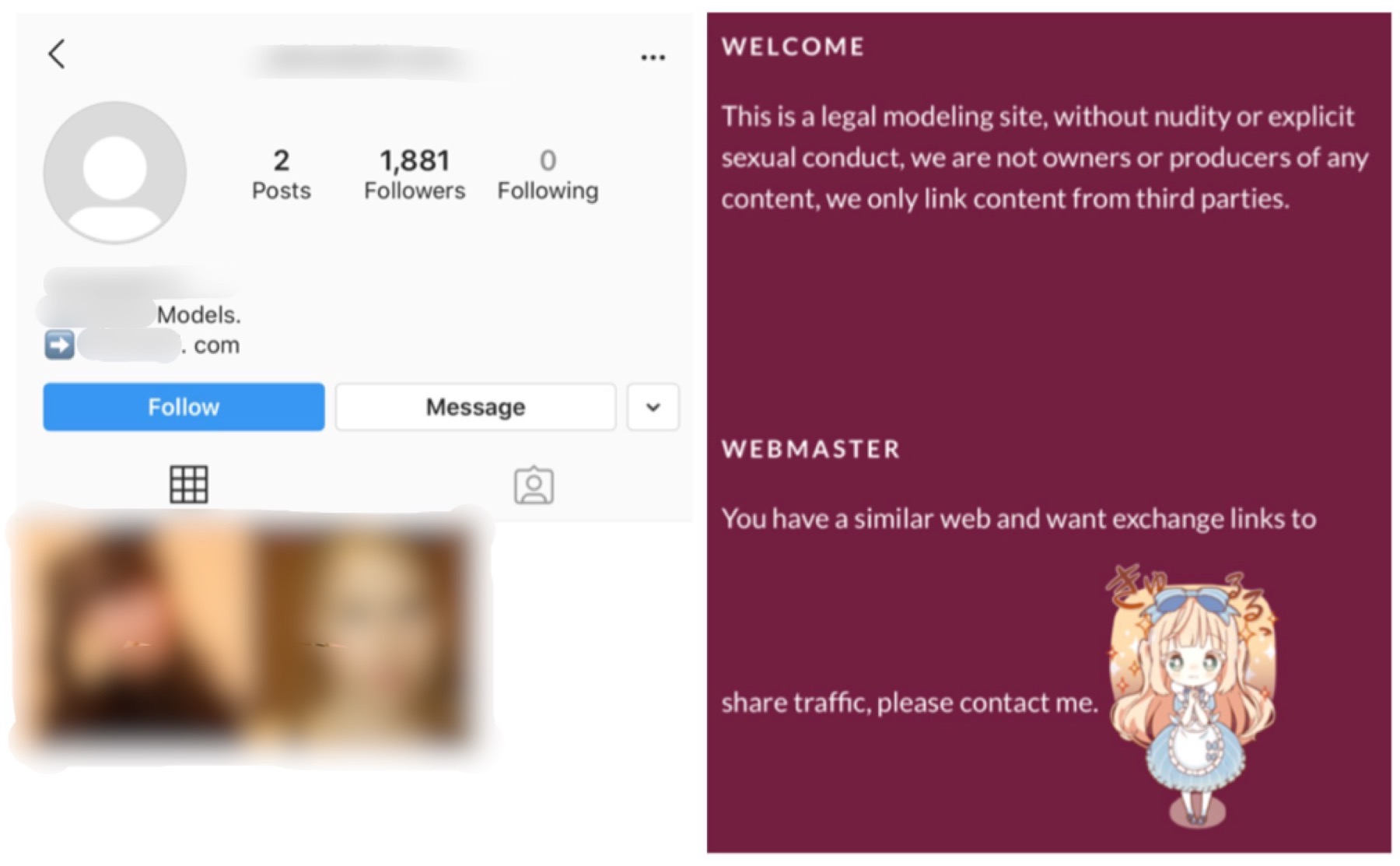 Collective Shout investigation: An Instagram account with hundreds of followers directs users to a child 'modelling' website which hosts images and videos of prepubescent girls in lingerie, bikinis and fetish wear

Comments also remind us that these images are not just about fantasy - men are using them for sexual gratification. Years later, the girls (now grown women) are being re-victimised in plain sight on Instagram.

As well as aiding the circulation of decades-old collections, Instagram serves as a global repository for images of today’s aspiring young ‘models’, gymnasts, dancers and actors. Instagram is specifically designed for the widespread dissemination of photographs to followers of particular accounts or pages. Underage girls - often directed by the adults charged with their care - flock to the platform to share their photos and videos. And, because Instagram fails to stop predators, these men are free to follow and harass the girls, routinely targeting them with sexually abusive remarks. 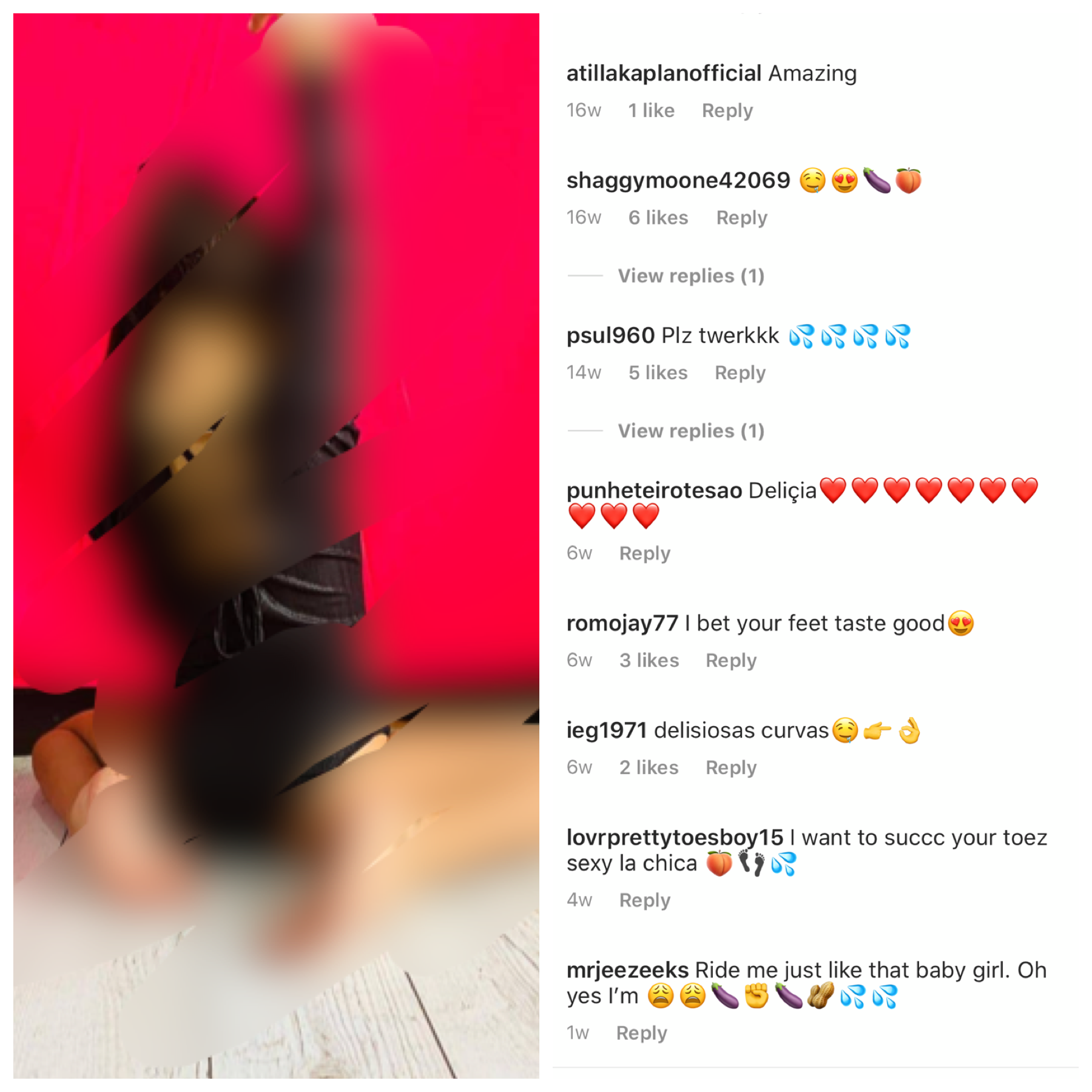 Beyond predatory men engaging in sexual harassment and abuse of underage girls, there is now a very large and open predator community on Instagram which collates pictures of underage girls for the sexual gratification of followers. These parasite pages, as Collective Shout has described them, serve as an open, unashamed echo chamber where men can get excited about young girls bodies’ and describe how they would like to abuse them, in a way that used to only be seen in dark corners of the internet.

Instagram algorithms actually suggest new girls to follow when a user follows other similarly aged girls, thus doing the work for the predators, making it easier to curate, build and share their collections.

As Instagram continues to facilitate the activities of exploitative adults, it’s putting underage girls at risk. Here’s how:

Instagram is one of the world's biggest social media sites, with an estimated half a billion unique users to the site every day. Thousands of men are openly sexualising children on Instagram - in plain sight.

These are not isolated incidents. They are common. While Facebook hides behind child exploitation material statistics relative to platform-wide activity, sexualisation, eroticisation, harassment and predatory approaches are normal experiences for a cohort of underage girls - many who are under the permitted user age of 13 - on Instagram. Girls are learning to tolerate these behaviours and see them as a normal part of life. 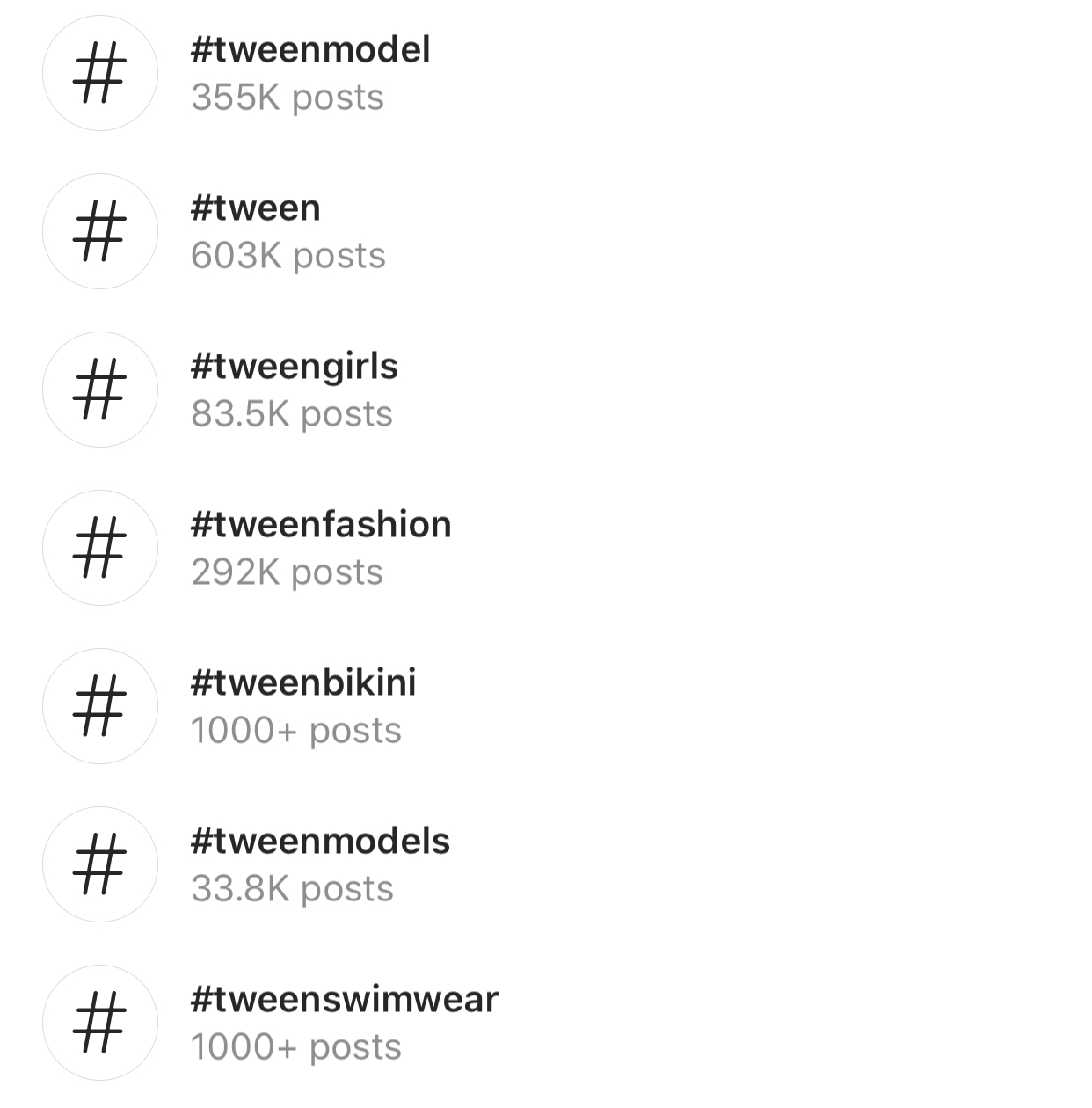 Now that Instagram has legions of predatory men creeping over young girls, numerous parents and other adults (who should be ashamed of themselves) are exploiting children - their own, and other peoples’ - to commercialise underage masturbation fodder. They set up subscription-based websites and accounts on content-sharing platforms like Patreon and Boosty to sell images of underage girls wearing bikinis, cosplay costumes, g-strings and lingerie. The websites and subscriber-only accounts are no different from the websites of the early 2000s described above. Website hosts, photographers, model ‘scouts’, brands and parents are all in on the act. Instead of protecting these girls, adults are exploiting them, grooming them to use their bodies as sexual objects, and profiting. 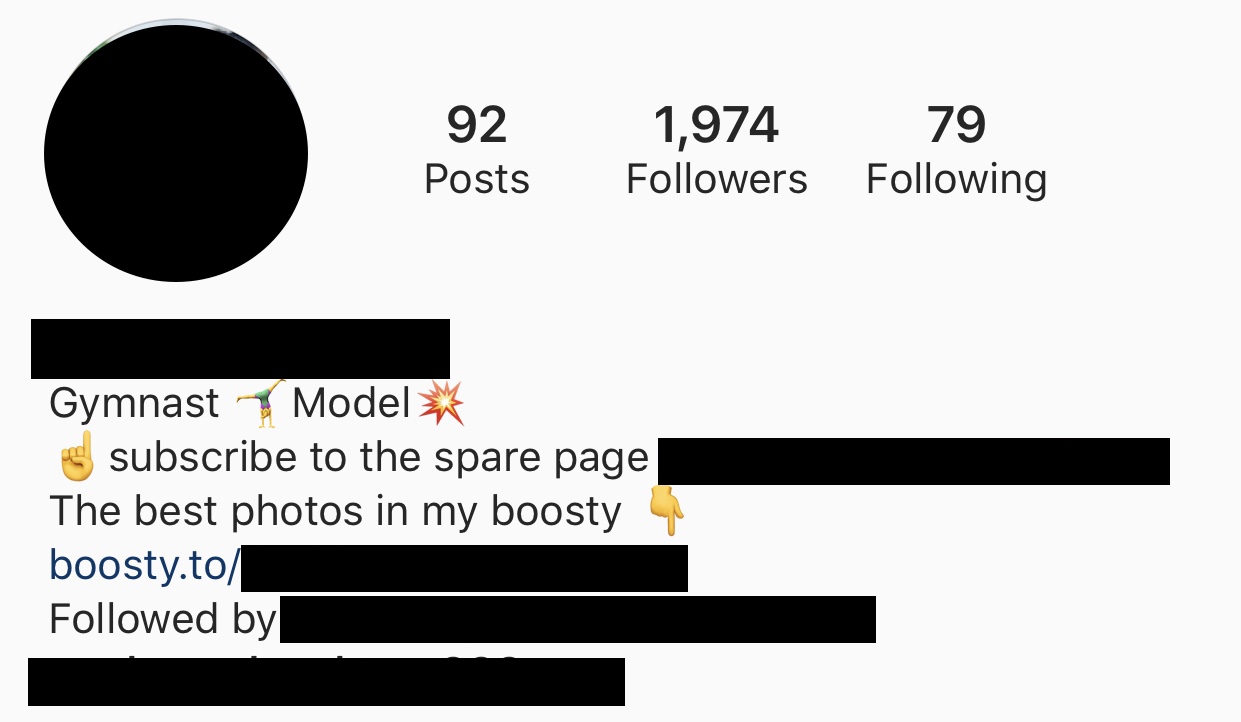 Instagram aids the trade in monetised sexualised imagery of underage girls by allowing users to advertise and provide links to purchasable content. The girls’ personal Instagram accounts, and so-called ‘fan’ and ‘shout out’ pages, serve as sneak-peeks of the content predators can access if they pay for it. Some accounts offer content directly through Instagram in exchange for Paypal or Cash App payments, or Amazon gift cards.

Despite all this, Instagram has repeatedly refused to remove pages which promote the sale of sexualised images of children. 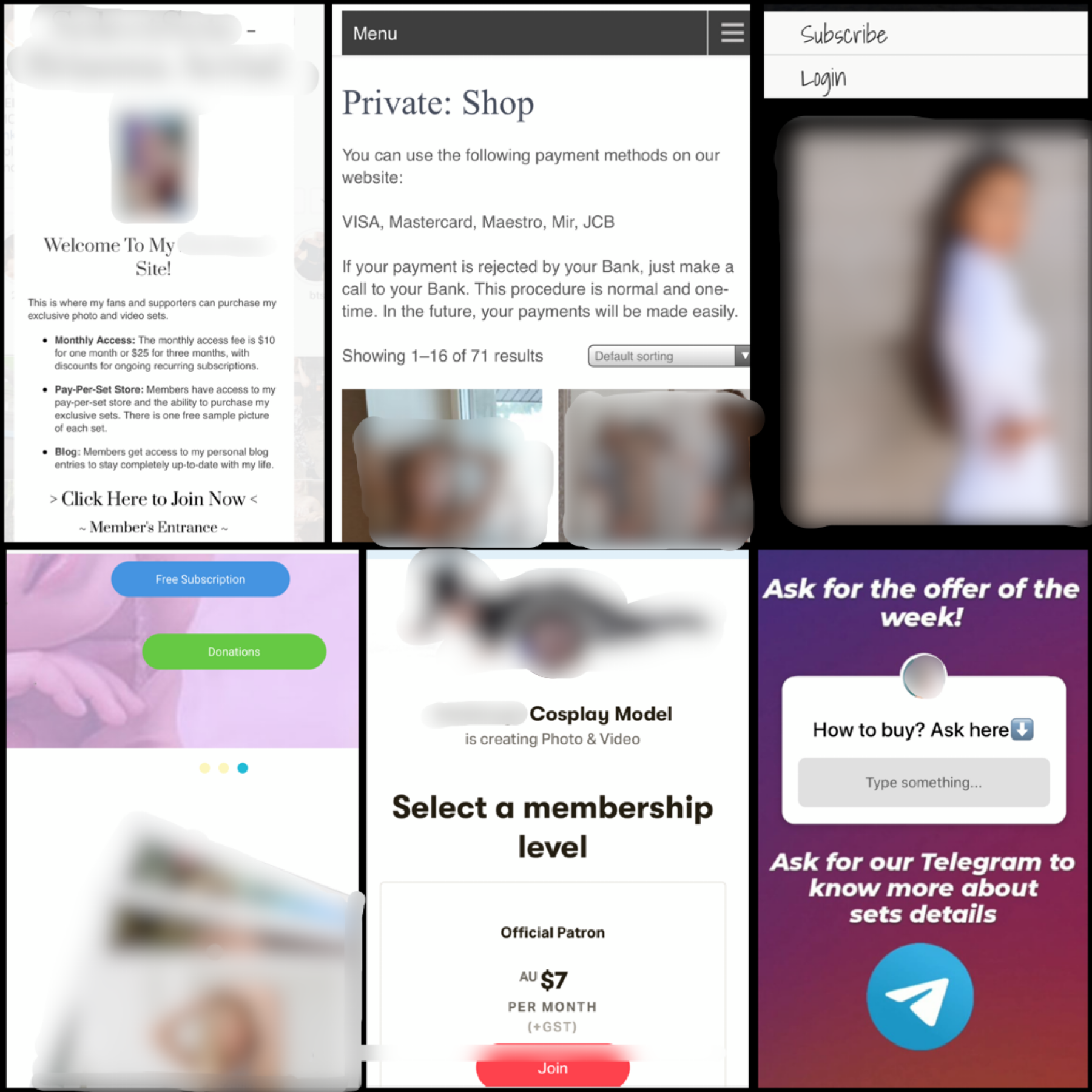 Predators are also using deepfake technology to create child exploitation material of Instagram’s child ‘models’. Revealing the widespread nature of this exploitation is a recent Instagram post shared by the mother of a just-turned-13 year old girl whose own sexualised images have been promoted on Instagram and sold on other platforms for years. She wrote:

More than a year and a half ago, I first discovered illegal photos of my daughter, they were shown to me. It turns out that there are many sites where every model from Instagram is presented in the worst form. Photos are distorted using various tools, and normal photos of a child turn into child pornography. I informed five mothers from Instagram that their children are on this site. These are very famous model girls with huge accounts. None of the mothers did  anything to remove this.

Corporates are profiting from the fetishisation of children

Several swimwear and clothing companies are profiting from Instagram's open eroticisation of children, using underage models to increase engagement and sell products. Boutine LA, Chixit, BeijoBaby, Gils Graphics and Australian brand, Young Glamour Girls - to name just a few. Collective Shout has documented numerous images of 14 year old girls in g-strings, tagged with various brand names. The girls describe themselves as ‘brand ambassadors’ for companies whose own Instagram pages are filled with objectifying and porn-style images of women and have large followings of men. This only increases the girls' exposure to and connection with predatory men.

Last year, a 14 year old US-based Instagram model claimed to be an ambassador for Dan Bilzerian’s cannabidiol and vape products brand, Ignite. Sexualised images of the girl wearing an Ignite-branded bikini were posted to her account. The posts tagged Ignite's corporate, porn-and-drug-themed ‘21+’ Instagram page, and invited other girls to 'join the Ignite team’. Today she has over 530k followers across her two Instagram accounts and is the subject of numerous fan- and shout out-pages. One still hosts her Ignite-tagged photos, and a range of others, including some captioned ‘hot pink thong bikini’. Others are tagged ‘#lingerieteen’. A recent 'story' on this page featured the underage girl in black lace lingerie. Victoria Secret's corporate page was tagged.

Instagram profits too. It attracts billions of advertising dollars each year while facilitating the sexualisation and exploitation of underage girls. 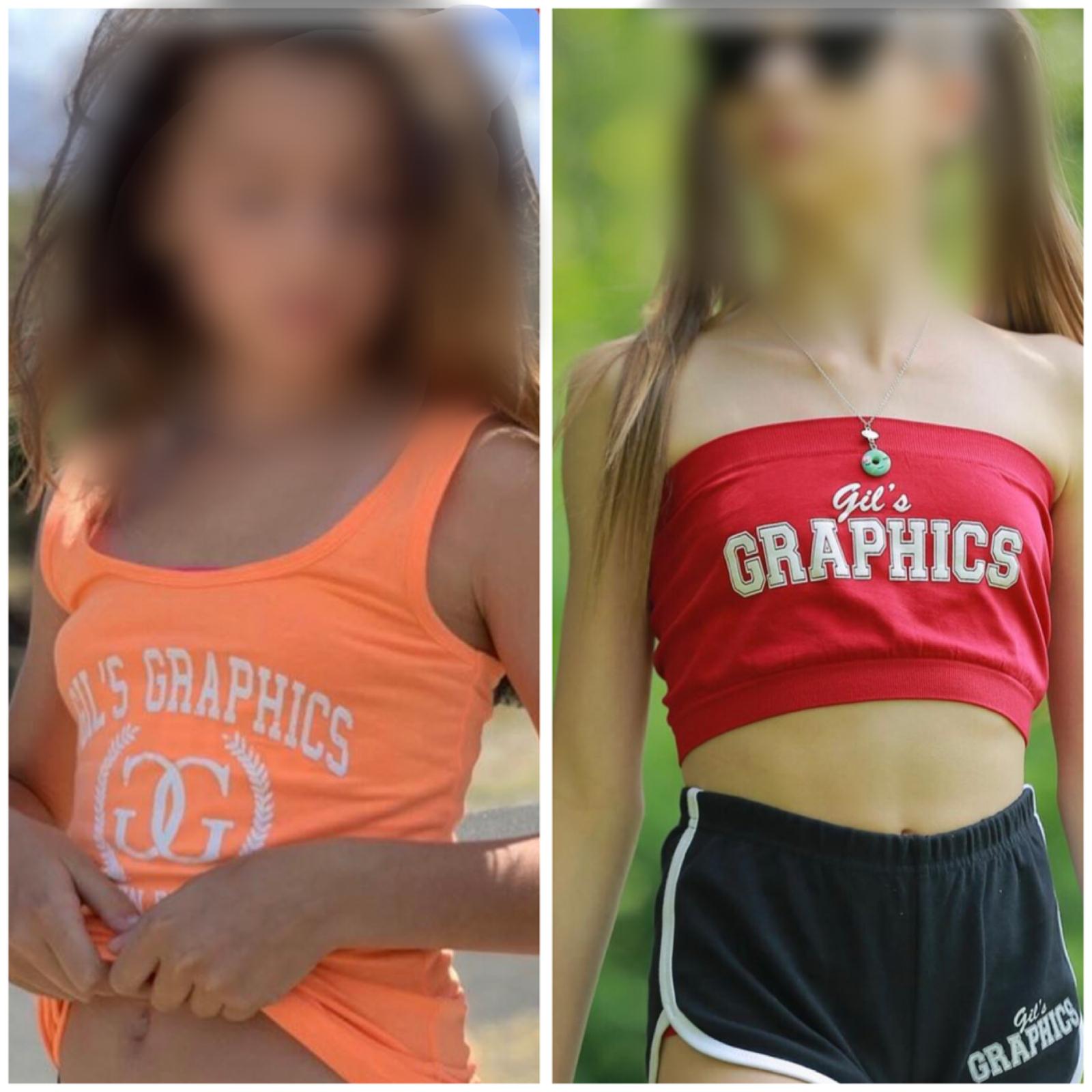 For today’s child predator, Instagram is a free, indemnified version of the sex offender’s hard drive of decades past, providing access to collections of sexualised images and videos of underage girls at no cost and minimised risk to the offender, and serving as a gateway to more, 'exclusive' content. Instagram has normalised and even sanitised the sexualisation and eroticisation of underage girls, creating an online space which allows paedophilic behaviour, discussions and fantasies to flourish.

Decades after the documented harm of girls on web-based ‘child modelling’ sites and years after criminal convictions were laid against the site owners - and 18 months after the #WakeUpInstagram campaign was launched - why is Instagram still enabling these predatory activities? 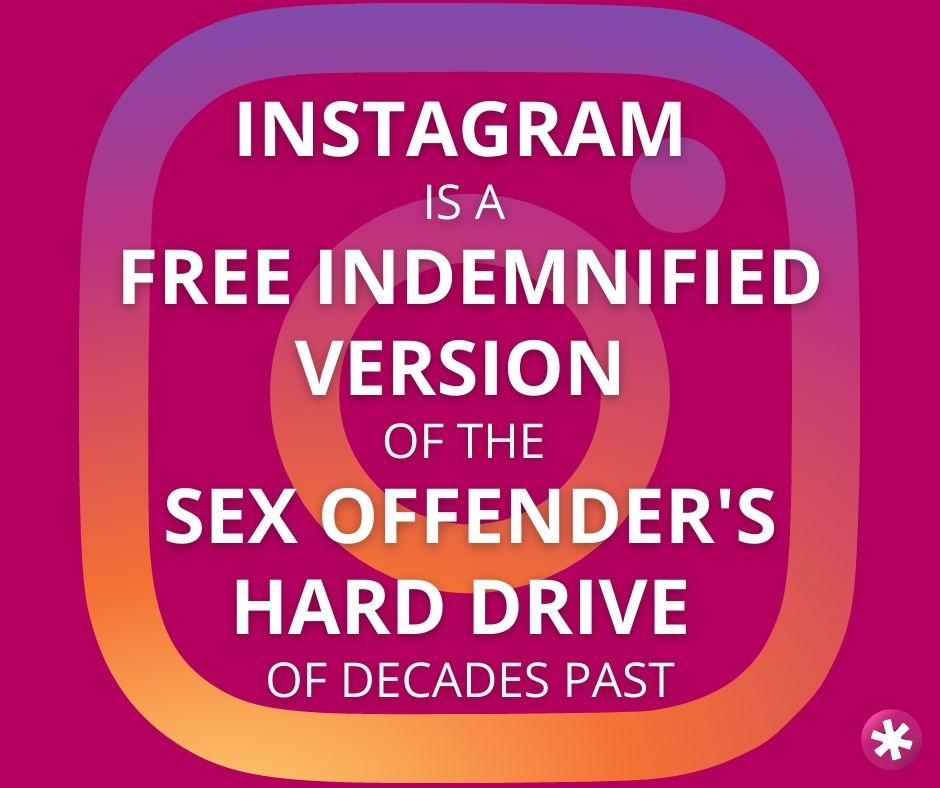 Instagram and the other tech giants have not done enough to prevent the sexualisation of children on their platforms. The long term consequences of this will be catastrophic, with risks to children increasing if Facebook goes ahead with plans to roll out ‘Instagram for kids’.

James*, 36, works as a research scientist in Oxford, United Kingdom and is a Collective Shout supporter and activist. Read James' earlier blogs here and here.