The Mask You Live In: Challenging harmful cultural messages about masculinity

One of the most moving experiences I have had as a speaker addressing young people around the country, took place about a year ago when a Year 11 student in a WA secondary school stood to his feet during the discussion time following my talk on how our culture shaped boys views of themselves in negative ways.

Visibly distressed, this young man recounted that his brother had just taken his life with a drug overdose, that he had been bullied every day of his life, and that he had no friends. He began to cry.

From the front of the hall where the boys were gathered, another student stood, walked to the back of the room, and hugged his crying classmate.

I had to leave the room for a while to pull myself together.

It is rare to see this display of emotion – and the open expression of care – between boys and their peers.

However, my colleagues and I are increasingly witnessing more boys wanting to connect with their emotions, looking for permission to be allowed to express themselves, wanting to rise up against culture norms which train them in a brutalised version of masculinity.

Now comes a film which will help them do just that. 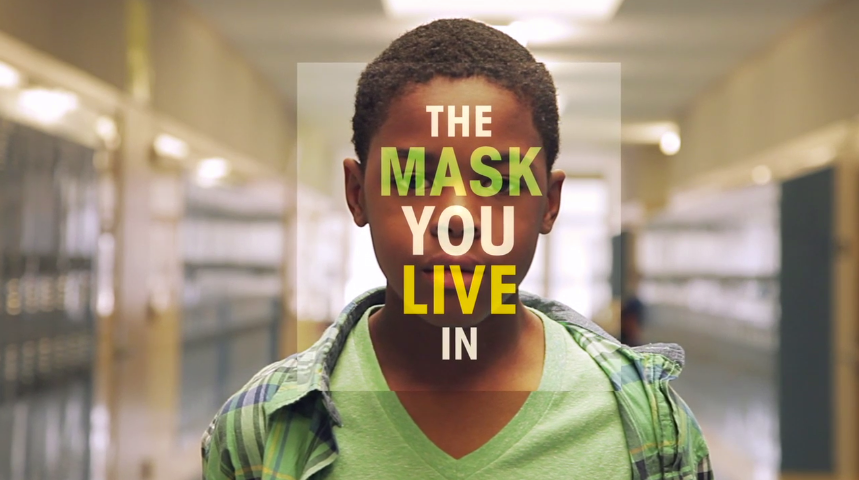 The Mask You Live In, by US documentary filmmaker Jennifer Siebel Newsom, follows boys and young men as they struggle to stay true to themselves while negotiating society’s narrow definition of masculinity. It follows on from the ground-breaking 2011 film Miss Representation, which put the spotlight on female stereotypes and which Collective Shout (www.collectiveshout.org) helped bring to Australia).

Pressured by the media, their peer group, and many adults in their lives, young men in the film confront messages encouraging them to be cut off from their emotions, devalue authentic friendships, objectify and degrade women, and which teach them that they can solve problems through violence.

As well as the boys themselves, we hear from experts in neuroscience, psychology, sociology, sports, education, and media, offering empirical evidence on the “boy crisis” and tactics to combat it.

The film explores how common phrases like be a man, be tough, don’t be a pussy, a win-at-all-costs sports culture, violent video games, and lack of emotional vocabulary, is encouraging boys to repress their emotions.

Newsom examines the frightening results of those messages. Her film looks at the high rates of violence, alcohol and drug abuse, mental health issues, suicide, and poor relationship skills, affecting many young men.

Asked what impact Newsom hoped The Mask You Live In will have on people, she replied:

I’m hopeful and pretty confident that The Mask You Live In is really a catalyst for a national conversation around healthy whole masculinity that we’re in dire need of having. Masculinity has increasingly been about aggression, dominance, control and power, and so many young boys find that unnatural and uncomfortable but feel this pressure to conform. The more we as adults model healthy masculinity, the healthier our boys can be. Ultimately we have to really support our boys and help them not to repress their emotions and help them to stay true to themselves. We’re all born sensitive and we’re all born empathic. Some studies indicate boys are born more sensitive slightly at birth than girls, but then we socialize that out of them. So it is critical that we not socialize our boys in a way that’s ultimately destructive or harmful to them being themselves.

But The Mask You Live In doesn’t just showcase the crisis in masculinity in our culture – it goes on to explore positive ways forward. Men and boys are depicted exploring their feelings and sharing openly, in the moving final stages of the film. I kept thinking of all the men and boys, including my 21 year-old son, who I wanted to see it).  While the film was made in the US, it is of great relevance in Australia.

It is my hope this film will be mandatory viewing for every boy in secondary school. I believe this film comes at a critical time and is a major intervention in at least starting a conversation in how we have failed boys and men and the urgent need to redefine masculinity -  to help young men value inner strength, integrity, courage, leadership and social bonds, above the aggressive, domineering, anger-driven versions of masculinity which they’re sold now.

If we let it, The Mask You Live In could help us turn this terrible situation around and raise a healthier generation of boys and young men.

The screening will be followed by a panel including Project Futures Stella Fella ambassadors Andrew Morley and Mike Campbell along with Collective Shout co-founder Melinda Tankard Reist.

Film is rated MA15+ and is suitable for senior school students.