Australian woman Talitha Stone, 32, now living in Norway, tonight launched a global petition calling on the International Handball Federation (IHF) to change its rules to allow women players to compete wearing bike shorts instead of bikini bottoms. She has also called on the European Handball Federation (EHF) to drop the 1,500 Euro fine the Norwegian women’s team was slapped with for defying the rules.

The EHF disciplinary commission fined the team for breaking the rules by wearing bike shorts instead of bikinis at the Euro 21 tournament in Spain last weekend. The EHF described the shorts as “improper clothing".

Collective Shout is backing Ms Stone who worked with our movement when she was still living in Australia. Ms Stone led our 2012 campaign against the Lingerie Football League (LFL) by going undercover in tryouts for the game - which involved playing gridiron in lingerie - to expose its sexist nature. Players were required to sign a contract agreeing to ‘accidental nudity’. Channel 7 eventually dumped its LFL broadcast.

Ms Stone’s change.org petition is directed at the IHF President Dr Hassan Moustafa, EHF President Michael Wiederer and 27 others connected with the game. In it she states:

“As an Aussie sports-loving woman living in Norway, I am really disturbed to see the Norwegian women’s beach handball team fined for not playing in bikinis.

“Male players are allowed to play in tank tops and shorts. But the International Handball Federation rules state women players have to wear bikini bottoms ‘with a close fit and cut on an upward angle toward the top of the leg’…

“I’ve always been a big sportsperson. I was involved in athletics from a young age and now I train and compete in triathlons here in Norway. I’ve always felt that there’s a big difference in how men and women are treated in sport - different expectations about performance, appearance and clothing.

“Why should female athletes be punished for wearing an outfit which is functional and practical allowing freedom of movement without being worried about possible exposure to a big audience as well as unwanted comments and sexual harassment?

“Global research shows the number of girls playing sport is declining because they are self-conscious about their bodies and attracting unwanted attention. Forcing women to wear bikini bottoms sends a bad message to all girls that sport isn’t about fitness and enjoyment, but about putting your body on display.” 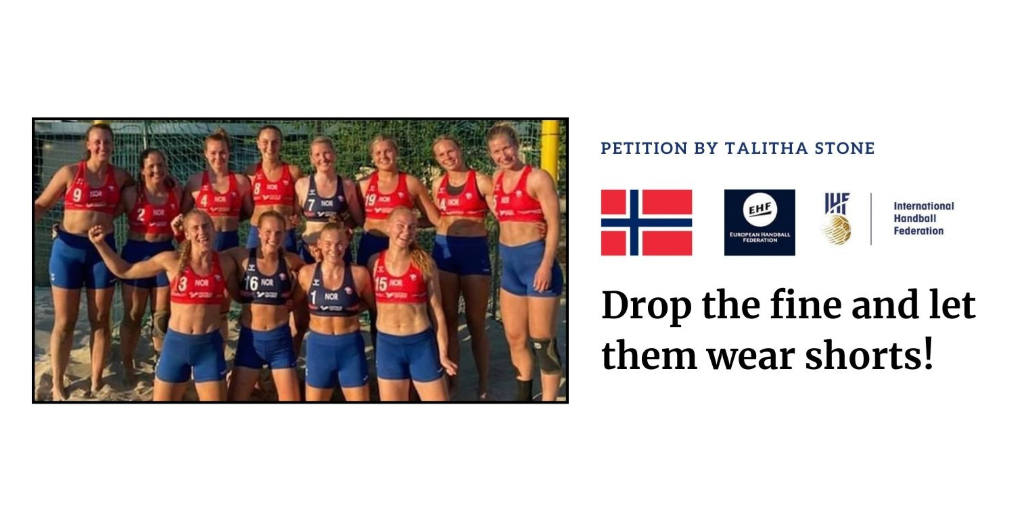