A supporter has alerted us to this shop front window display for a Mossimo store.

The promotion is called 'Peepshow.' Through the use of 'peephole' imagery and words like 'strip' on their signage, the promotion makes clear reference to the sex industry and voyeurism.

The message to women here is, you are valued for your appearance and your ability to sexually arouse men. That's your role in society. 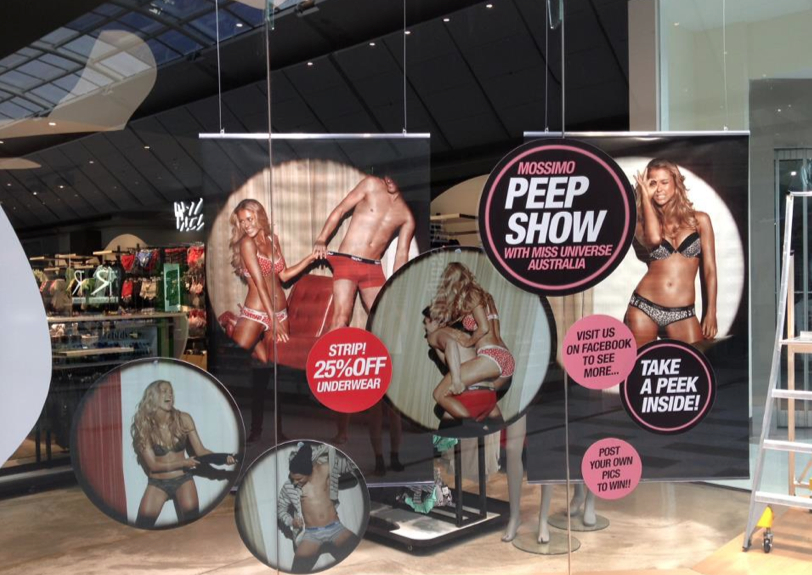 The message to men? 'Peeping' at women in their underwear isn't a crime after all, stalking is just a bit of sexy fun and women like it. Look how happy Miss Universe is! 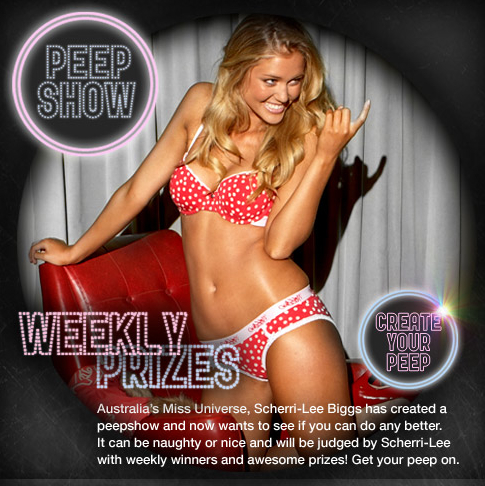 Did we mention 'Miss Universe' is involved?  The Mossimo facebook page has created an app that not only invites you to 'peep' at 'Miss Universe', it also allows users to create their own peepshow. Just upload your photo, allow Mossimo to assign you a ridiculous name like "Naughty Nadia" and you're on your way to winning a prize.

According to their terms and conditions, Mossimo believes this competition is suitable for users aged 16 and above. Soliciting sexy pics from teenagers and giving them an early introduction to sex industry practices is just fine apparently.

What Mossimo doesn't seem to understand is that what they're promoting as a bit of sexy fun, is actually a crime. There are countless examples of women being 'peeped' at and filmed without their knowledge and we have heard of the pain and trauma suffered by these women.

Peeping Toms are spying on women, up to ten a week reported to NSW police

Nicole - or as Mossimo describes her - "Naughty Nicole" has submitted her own entry to the Peepshow competition and we have to say, it's our favourite. It is well in the lead with almost 100 votes. Please vote for Nicole's entry by clicking on the appropriate links below. (Involves 'liking' the Facebook app. Simply delete the app from your Facebook settings after voting for Nicole's pic. Instructions for doing that can be found here.)

Fun Fact: Nicole's original entry said 'Mossimo Peepshow = Sexist Crap.' Mossimo contacted Nicole and said her entry had been removed because it violated Facebook rules for bad language. Who are they kidding? 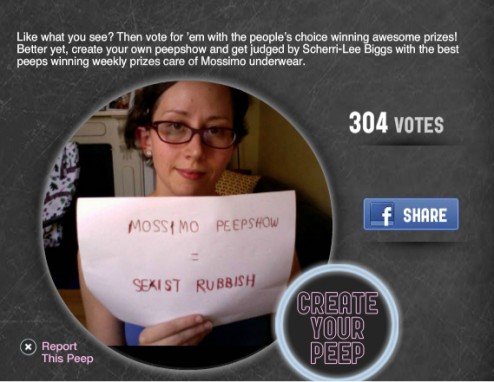 Nicole, along with the other protest entries "Classy Casey" (with 'Mossimo Peepshow aka sexist') and "Kinky Kathryn" (wearing a One Angry Girl Shirt - "Please prove your masculinity some other way") received hundreds more votes than other "real" entries.

Together, their entries and your votes sent a strong message that sex industry inspired ad campaigns and the objectification of women is unacceptable. Thanks to all who voted! 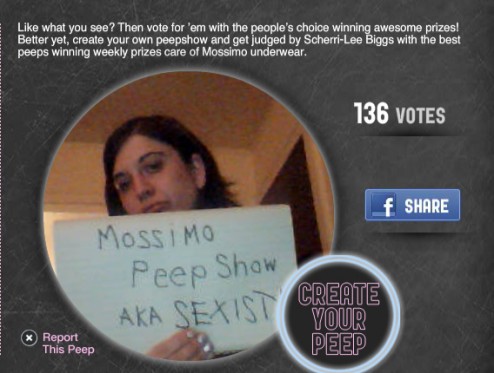 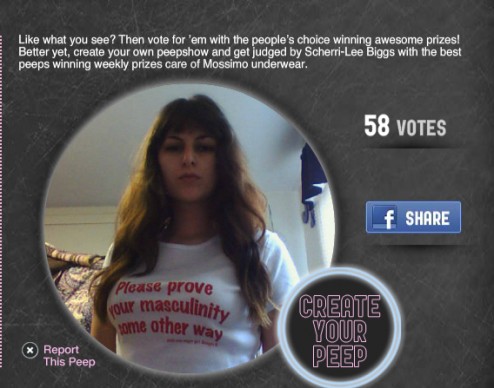