Last Friday, Ana Amini, a Port Macquarie mother and primary school teacher, posted a few lines on Target’s Facebook page lamenting the lack of age-appropriate, non-sexualised clothing for her daughter,8. She said they had lost her as a customer.

Six days later  the comment had attracted more than  72,000 ‘likes,’ and drawn thousands of responses from others concerned about scaled-down versions of adult fashion for girls. 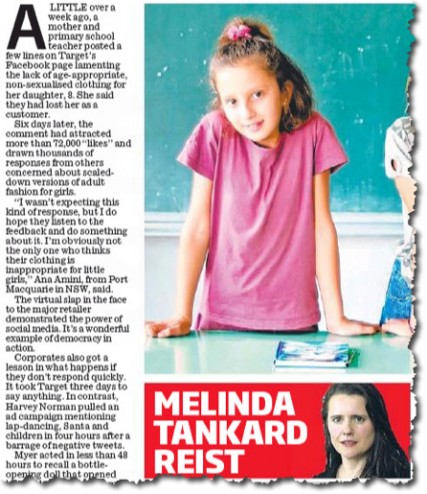 ''I wasn't expecting this kind of response, but I do hope they listen to the feedback and do something about it. I'm obviously not the only one who thinks their clothing is inappropriate for little girls,'' Ana Amini said.

The virtual slap in the face to the major retailer demonstrated the power of social media. It's a wonderful example of democracy in action.

Corporates also got a lesson in what happens if they don't respond quickly. It took Target three days to say anything. In contrast Harvey Norman pulled an ad campaign mentioning lap dancing, Santa and children in four hours after a barrage of negative tweets.

Myer acted in less than 48 hours to recall a bottle-opening doll that opened bottles by screwing them into her behind.

I address thousands of parents and girls every year. The lack of range in girls’ clothing is a frequent lament. Parents are concerned about design elements in clothing and accessories mimicking adult sexuality and the use of suggestive slogans and connotations.

They want something more than miniature versions of adult clothes designed to highlight sexual characteristics. Many girls also express a desire for clothing that doesn’t make them feel uncomfortable.

Of course this isn’t just about Target. And calling girls ‘tramps’ and ‘hookers’ as some have done takes the focus off the companies flogging the stuff.

But those who took to condemning the mother – and focusing on one pair of denim shorts as somehow evidence of mass hysteria - missed the forest for the trees. What we were seeing touches on the broader pornification of culture, from clothes to toys, billboards, magazines and music videos.

Girls receive distorted messages about their bodies, sexuality and gender roles. There’s an emerging theme that children are more sexually mature than their age suggests.

It’s part of a concept known as Kids Are Getting Older Younger. A recent study in the US found even six-year-olds believed they had to look sexy.

This is not about condemning developing healthy sexual development in girls. It’s about condemning a culture that rushes the process and reduces girls to the sum of their sexual parts. An overemphasis on sexuality in fashion contributes to this.

A Senate inquiry in 2008 stated: “the onus is on broadcasters, publishers, advertisers, retailers and manufacturers to take account of these community concerns.” But not much has happened since. Since then there is a growing body of evidence that sexualizing girls contributes physical and mental health problems

“Children are building their identities amid a regression of sexual equality and on the return of stereotypes…The danger is not only individual but collective,” says Chantal Jouanno author of French report Against Hyper-Sexualisation: A New Fight For Equality.

While much public protest is necessarily re-active, a pro-active initiative is being launched by Collective Shout: for a world free of sexploitation. The grassroots movement (which I’m part of) is about to launch a Corporate Social Responsibility Pledge, inviting corporates to sign a statement of intention not to objectify women and sexualise girls in products, services and advertising.

Collective Shout and Kids Free 2b Kids are talking to Kmart about the pledge after a positive meeting with company executives.

Wouldn’t it be good if companies chose to act ethically, rather than being forced to do the right thing? They could then so easily avoid a backlash.

As Shaun Bruce posted on Target’s Facebook: “The first retailer that actually listens will be the winner by attracting customers.”

The Port Macquarie mother and what she has sparked may not bring joy to the hearts of corporates who put profits above the wellbeing of girls. But it does bring hope to those who believe individuals have a right to speak out and bring big business to account for its actions.