My week on Planet Pageant

Collett Smart, member of the Collective Shout team and child/adolescent psychotherapist has been actively campaigning against child beauty pageants.  She has written a number of articles, has spoken at protest rallies and has been outspoken in the media. She recently appeared on Today Tonight to debate Mickie Wood, the mother of a well known child beauty pageant participant. From there she was invited to attend the child beauty pageant recently held in Melbourne. Collett attended the event and has written about her experience on 'planet pageant.' As posted on The Family Factor.

So the pageant has come and gone but not without a trail of debris left in its wake. As an advocate for childhood, I have had an interesting week, watching all the drama unfold.

Last Wednesday night, I spent time on the set of Channel 7's Today Tonight in a debate with Mickie Wood. Mickie is mum to Eden Wood, the face of Universal Royalty Beauty Pageants Toddlers and Tiaras. The debate lasted approximately 30 minutes in length but was cut to 7 minutes for TV. Prior to the debate I also watched 3 live performances of Eden on set.

Firstly I need to emphasise that the issue in Australia has never been about making Eden Wood feel unwelcome or keeping her out of the country. The issue has been keeping child beauty pageants out of Australia and that some of the media continue to get this wrong, which detracts from the issue we have in protecting young girls future development.

The 3 main messages I wanted to bring across to Australia in the debate were:

Even by the end of the debate, Mickie Wood did not grasp the difference between sex and sexualisation. My full definition, which was cut during editing was that,

“Sexualisation occurs when a person's worth is judged on the basis of sexual appeal and behaviour to the exclusion of other characteristics, when a person is held to a standard that equates physical attractiveness with being sexy, or when a person is seen as a sexual object rather than a person with their own independent thoughts and behaviour. While boys and men can be the target of sexualised messages and images, research shows that girls and women are portrayed in a sexual manner more often.” (Australian Psychological Society)

Although 6 year old Eden had performed highly sexualised pelvic thrusts, grinds and booty shakin', Mickie could still not see that there was anything 'sexualised' involved and called it a 'bunch of rubbish'

I reiterated that child development experts and child psychologists believe that Child Beauty Pageants objectify children by placing them in a position where they are merely objects to be looked at and admired for outward appearances and beauty, rather than skill or intellect.

Children are adultified through the use of fake hair, fake nails and 'red carpet wear', which is something children should not even be considering at this age. Children should not be expected to behave like adults.

Mickie brought up the idea (not shown on Today Tonight) that all little girls like to 'dress up'. I mentioned that I had no issue with role play as this is a part of healthy child development, however pageants put children into pre- scripted roles that had nothing to do with imagination and were not child directed. Children are left vulnerable to hyper-focus on body-image, already the No 1 issue for young people in Australia. This in turn puts them at risk for developing future eating disorders, self-harm and anxiety, to name a few.

Mickie stated that in society 'women who were prettier always got the job'.  I turned to Matt White and emphasised that WE are society and there are many people saying no to this kind of archaic thinking, that a woman would be given a job for her looks above her brain.

Finally Mickie invited me to attend the pageant and I took up the challenge. I flew down to Melbourne for the event. 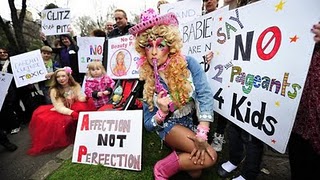 Despite some media claims that protesters would ‘storm the event,’ on my arrival at the venue in Northcote, all I found were spectators entering the venue and media crew, camera men and hosts waiting outside to catch a glimpse of Eden Wood.  There was not a protester in sight! Where were they? Exactly where they said they would be, as far from the pageant as possible, ensuring the safety of the children. Pull the Pin's Catherine Manning organised a fabulous family friendly rally at Fitzroy Park. (A great rally round up here)

Outside, I was greeted by the Today Tonight crew who told me that the A Current Affair team, would not allow Eden’s manager Heather Ryan into the venue, so Ms Wood and Eden refused to attend.

The Today Tonight crew told me that Eden was in a ‘safe house’, which I later found out was across the road and had been provided by Today Tonight themselves.

Toddlers & Tiaras kept to their word and I was granted entry into the venue. I spent 2 ½ hours watching the pageants, as I wanted to get a true feel for the categories, age groups and families there.

Unfortunately this scuffle and drama surrounding the media has completely detracted from the issue we have had all along.

Let me say from the outset, that we are all doing our best as parents and my intention has never been neither to criticise the Woods nor the parenting of the entrants.  I saw a large group of parents that love their children and yes I did see children enjoying themselves. However, I need to strongly emphasise that this does not change the way I feel about the effects that pageants have on young children’s development.

The largest group of children in the pageant were under 10 years old, so the argument that these children have chosen this activity, particularly the 0-12month, 12-24 month and 2-4 years, is ludicrous. I tried my best to find a skill involved in pageantry, however children were brought up on stage on the right hand side, either carried on by mum, holding mums hand or on their own if they were above 4yrs old. The children would then walk around a little, looking to mum for what to do next; blow a kiss, wave and walk off on the left. All while Annette Hill commented on what their outfit looked like, what colour hair and eyes they had and what their hobbies were (every second child liked watching toddlers & Tiaras).  Annette commented a number of times that she wondered how the judges would be able to decide on the winner. My point exactly - the judges should NOT be judging children’s appearances and deciding on which child is most appealing.

What I also noted was that the children’s ‘routines’ were not choreographed like in a dance eisteddfod or drama piece and the only ‘skill’ I could find was how pretty they could look and whether they could smile and wave.

I wondered whether the ‘red carpet' session would somehow present with some 'skilled' performances. Again all I saw were children walking up onto a stage dressed as their favourite ‘role model’. Some of the role models chosen were; Mini Mouse, Ariel the Mermaid, Dorothy from Oz and then we also had under 8 year olds dressed as Beyonce, Lady Gaga, Keira Knighley, Miley Cyrus and Sandy from Grease, complete with leathers. Great role models for our young women to be aspiring to – I think not! Where were the scientists, astronauts, sports women?

I left soon after the 8 year old category and decided not to stay for the crowning. I don’t think I could have stood watching only one girl in each category win her section for being the most beautiful, best dressed and confident ‘walker’, knowing that the rest of the girls would leave that afternoon, feeling they weren’t good enough or pretty enough and there was nothing they could do to change this.

As I stepped outside I met the mum of ‘lady gaga’. Her words to me were. “You look like the lady from Today Tonight”. I said “Yes, I am.”. We chatted a little about my thoughts and she finally said, “You know, I wish I had never entered my daughter in this pageant. I’m worried that the media are going to twist my words inside there too.” 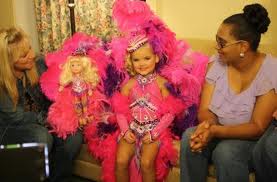 So it turns out that the death threats were a big media beat up, to gain publicity and feed off of the popularity of Eden Wood. Parents were very unhappy that their children did not get to meet Eden and many Australian families there felt they had been ripped off by the Big Business Beast of Child Beauty pageantry.

Of course, none of those involved in either Pull the Pin or Collective Shout have endorsed the hate mail that has allegedly been received by pageant organizers and participants. That sort of behaviour is completely unacceptable. It is worth mentioning that those coordinating the campaign against child beauty pageants have also received nasty, hate mail. I myself received emails after my Today Tonight segment such as, "Go shoot yourself, YOU are a nut case lady and you are so arrogant” (to list a few favorites).

It is a shame that the media have made this issue about individual participants rather than focusing on the bigger issue of child exploitation. In doing this, they have become as complicit in the exploitation of children as the pageants themselves. Contrary to some reports, thousands of people did not sign a petition to ‘stop a little girl coming down under.’ They signed the petition to stop child beauty pageants in Australia. Eden Wood is as welcome in Australia as any other little girl and her family. We are against pageants, not people.

Debate between Mickie Wood and Collett Smart on Today Tonight

From beauty pageant to a circus