Not happy Target: one woman speaks out, thousands join in

Target has found itself at the centre of controversy after a Port Macquarie mother posted this comment on its Facebook page:

Could you possibly make a range of clothing for girls 7-14 years that doesn't make them look like tramps. Whatever happened to modesty and feminine clothing that came in a colour other than black. You have lost me as a customer when buying apparel for my daughter as I don't want her thinking shorts up her backside are the norm or fashionable. So disappointing...

The comment received over 20,000 likes in a short period of time. By the time the media caught wind of the issue, this had increased to well over 65,000 'likes' with thousands of comments posted in the discussion thread below it. 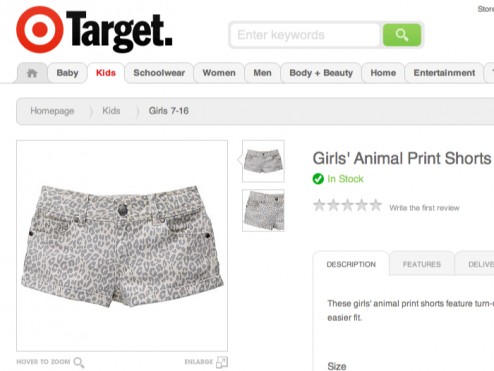 It's great that Target is being challenged to make changes. ‘While ‘trampy’ isn’t the language we choose to use (and our focus has always been on sexualised culture, not individual girls) a significant sentiment is being expressed in the overall call to Target – one which 65,000 people agree with and which we hear about every day.

Parents want better choices for their their children. They want age appropriate clothing, not sexualised styles and designs. They want Target and other retailers to lift their game.

This overwhelming level of feedback presents a great opportunity for Target and other companies. It is our hope that they take a proactive approach to this issue; re-evaluate their own policies and standards, make necessary changes and a commitment to not sexualise girls or objectify women in future.

There is now a global body of research documenting the harms of sexualisation and the role that companies play in this harmful cultural trend. Find out more here.

No, we are not suggesting bonnets and burqas for our daughters

The disparaging and belittling of mothers: on mother shaming in sexualisation debate