Lonergan considers herself recovered. ''They never say never, but so far, so good,'' she says.But what continues to make her sick is the way women's breasts are sexualised and objectified by companies who pinkwash their motives by supporting breast cancer charities, especially during October - Breast Awareness Month. 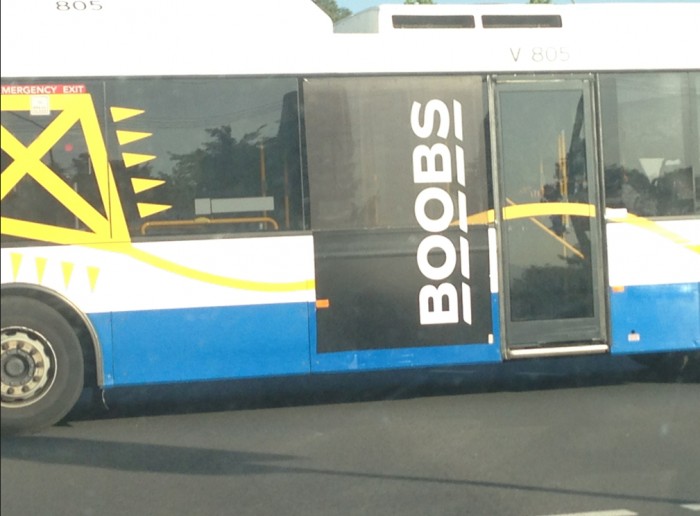 Lonergan has written a complaint to underwear brand Bonds about its new ''Boobs'' campaign.

''My 'donation' to research in the form of malignant flesh should not be devalued, by my cancer being reduced to a Benny Hill punchline,'' she tweeted recently.

Bonds has set up Boobs billboards in Sydney, Melbourne and Brisbane. Its website promised to ''reveal everything'', which, unsurprisingly, was its new bra range. Bonds also has a partnership with the National Breast Cancer Foundation (NBCF).

One in eight Australian women will develop breast cancer. On average, seven women die from breast cancer every day. This year it's predicted 14,940 women will get the disease, but juvenile boob-centric campaigns trivialise it. Should we be about ''saving boobies'' or saving lives?

''I attended an NBCF forum in August where the chief operating officer assured me that they take all marketing partnerships seriously and would never do anything to denigrate survivors. I told her of a number of off-colour examples they've supported in the past and she claimed they had a new attitude to these things. Apparently not.''

Breast cancer survivors take these pinkified sexed-up campaigns personally. They survived, but for many their breasts didn't.

''You get cut apart and chunks removed, burnt with radiotherapy, nerve damage and then all the time confronted by breast-cancer-charity-approved campaigns saying, 'Your worth as a woman is in having perfect, undamaged breasts,' is just so depressing. It affects … self-confidence, relationships. I just don't accept that there is a greater good being served by these kinds of campaigns.

The Nena and Pasadena clothing company (N&P), co-founded by new Sydney Swans star Buddy Franklin, promotes the Tour de Crawf bike ride supporting Breast Cancer Network Australia. He has appeared on N&P's social-media sites with the network's branding. But N&P gear pictures women headless or faceless, handcuffed and positioned in degrading poses such as on all fours or curled up on the ground.

(This just in: The Breast Cancer Network Australia has stated that they had not given Nena and Pasadena approval to associate with BCNA and were not aware of the intention to fundraise prior to the announcement via social media. A representative has confirmed that after looking at Nena and Pasadena's depiction of women, they had declined N&P's offer of financial support. )

I'm not saying breast cancer awareness campaigns haven't been effective - and certainly they receive more funding than cancers that don't attack breasts. Responding to critics of the Bonds campaign, NBCF chief executive Carol Renouf says, with the money pledged by the company, the ends justifies the means.