Petition launched to stop US child beauty pageants in Australia

Collective Shout has initiated a petition in response to the news that a US pageant company plans to import its child beauty competitions to Australia. You can find the petition on the Care2 petition site .  The Petition is now closed. Thanks for your support.

A study conducted by Anna Wonderlich et.al (2005) in the Journal of Treatment and Prevention reported 'A significant association between childhood beauty pageant participation and increased body dissatisfaction, difficulty trusting interpersonal relationships, and greater impulsive behaviors and indicates a trend toward increased feelings of ineffectiveness.'

Kids free 2B Kids, the Australian Childhood Foundation and Psychologist Dr Michael Carr Gregghave previously called for children under 14 to be banned from these contests. 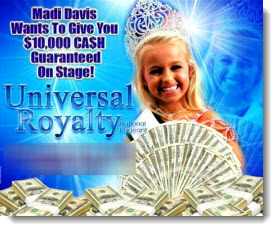 Television shows like Toddlers and Tiaras reveal the child exploitation endemic in these pageants. Child advocates around the world have spoken out about the sexualised clothing, suggestive dance moves, hours of grooming and preening required. They have expressed concern about the way pageants provide external validation to girls that their physical appearance is what is most important in being female. They have criticised the way child beauty pageants re-inforce stereotypical norms about female beauty. They have also pointed out that adultifying children in pageants and elsewhere invites us to see them as older than they are, which puts them (and other children) at risk of inappropriate treatment.

Pitting young girls against each other in a competition based on physical appearance and performance is harmful to their wellbeing.

Research on the sexualisation of children shows that reinforcing an emphasis on looks and attractiveness leads to negative body image, disordered eating, depression, anxiety and low self-esteem.

We call on the Federal Minister for Early Childhood and Youth, the Hon. Peter Garrett and the Victoria Minister for Children and Early Childhood Development, Wendy Lovell, to take action to prevent these style of pageants in Australia and (with State colleagues) to consider legislative measures to ban all future pageants for children.

Mtr on sexualisation of girls and pageants this week on SBS