One of these was 16-year-old Elizabeth Ann Roberts, who was featured in a pictorial entitled “Schoolmate Playmate” where she was described as a “bouncy teenager” who was occupied by “reading, writing and ‘rithmetic”. 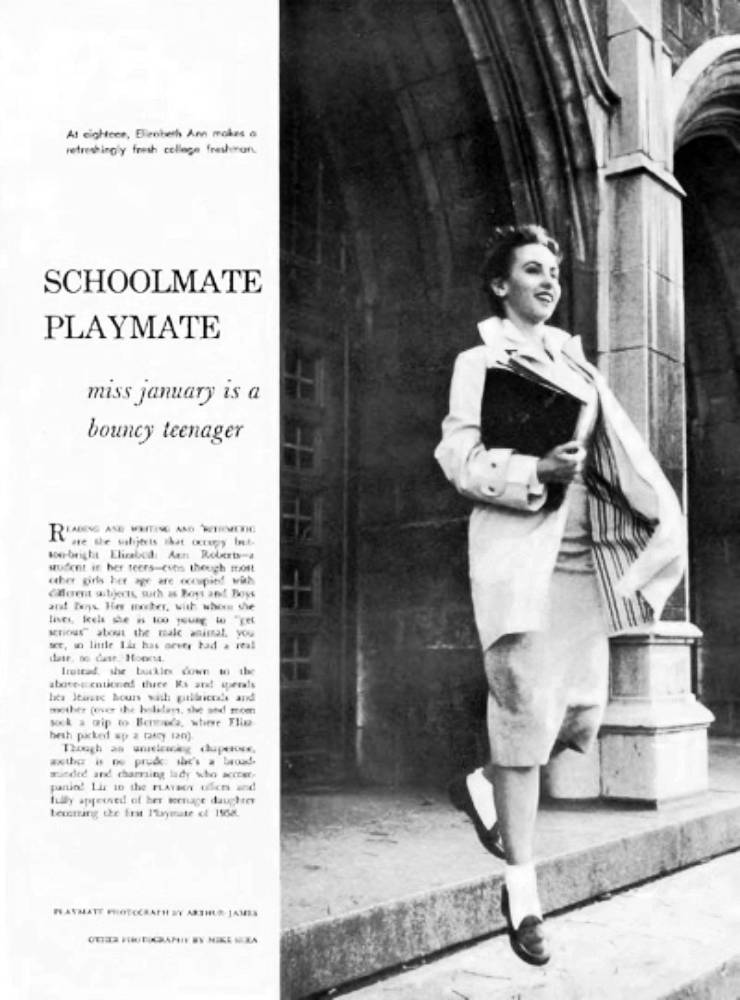 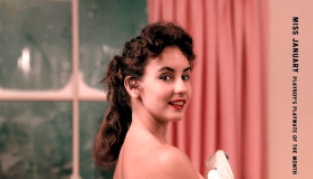 Hugh Hefner was brought before the court as a result, but the charges were dropped as Roberts’ mother had consented to the photoshoot.

Playboy published nude photos of ten-year-old Brooke Shields, who was made up like an adult, oiled and posed in a marble bathtub in its Sugar and Spice publication. 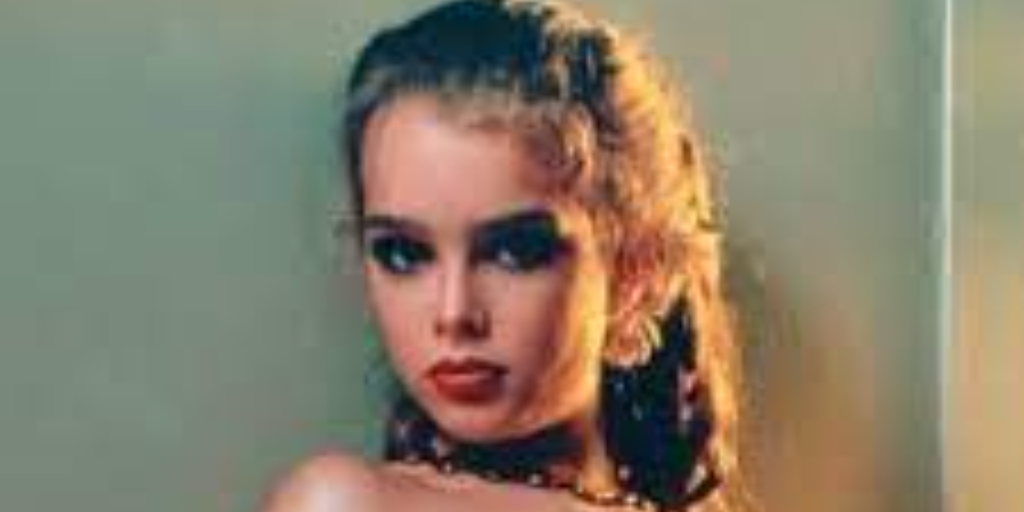 In 1977, Playboy published nude photos of then-14-year-old Jodie Foster, described as a “femme fatale”, “scarcely ready for a training bra” and “sophisticated beyond her years.”

Eva Ionesca was the youngest model to appear nude in Playboy, at age 11. Ionesca later sued her mother, who took and distributed the full frontal images, saying she had suffered a “stolen childhood” because of them.

Hugh Hefner was strongly influenced by Alfred Kinsey, dubbed the “father of the sexual revolution.” Hefner referred to himself as Kinsey’s “pamphleteer” and championed his work. Among other things, Kinsey claimed children were sexual beings from infancy, that they were not harmed by sexual abuse, and that he had documented sexual responses in children under six months old. The data was obtained through the sexual abuse of children ranging from 14 years of age to two months, which was also filmed. In Deconstructing Dignity by Eradicating Shame: The Pernicious Heritage of Alfred Kinsey, Judith Reisman and Mary McAlister wrote:

“Orgasms” were catalogued as infants and children who were “fainting”, had “convulsions,” weeping “hysterically” and “fighting” to escape their adult rapists. These men he called the children’s “partners.” Kinsey viewed screaming, weeping children as having “definite enjoyment” from the sexual experiences.

A Department of Justice, Juvenile Justice and Delinquency Prevention study, Children, Crime and Violence in Playboy, Penthouse and Hustler magazines led by Dr Judith Reisman found Playboy exploiting 4,656 children in cartoons and visuals between 1953 and 1984. Dr Reisman described Playboy’s “systemic use of little girls as autoerotic stimuli” and their “premeditated eroticisation of children”. 96.2% of Playboy’s child photos were centrefolds, and in one year, 39% of Playboy centrefolds were children under the age of 12.

Children were actors in or watching sex an average of 8.2 times per issue, with over 30% of images depicting a child and adult in a sex scene. Most cartoon children were aged 3 to 11. Children were drawn laughing at their gang rapes by adults ... Playboy’s sexualised children were systemic, statistically significant marketing decisions. Read more.

Playboy deliberately blurred the age distinction between girls and adult women. This was done by

[p]osing women with child symbols, clothing, dolls, bobby socks, standing on “tiptoe” or bathing with children’s toys and the like, are techniques Playboy editors have long employed to make the adult a child and the child an adult. Read more.

Playboy cartoons that featured little girls, apparently around age seven or eight, depicted them with “exaggerated breasts”. One photo depicting a girl cuddling a doll and lying face down on Disney sheets was determined to be a cut and paste image of both an adult female and a young girl by airbrush experts. The caption read: “BABY DOLL. It’s easy to feel paternalistic toward the cuddly type above. Naturally, she digs forceful father figures, so come on strong, Big Daddy.” 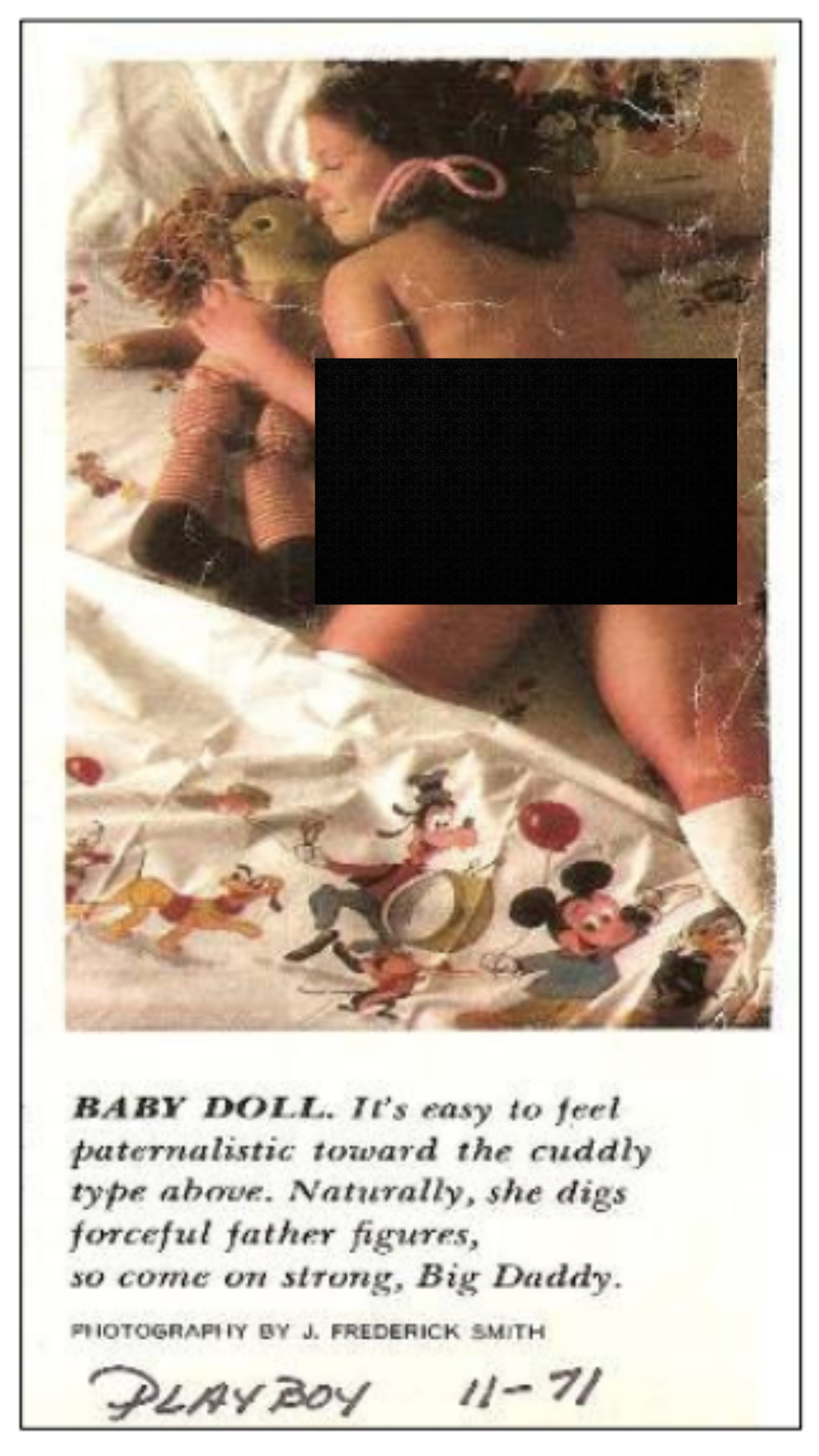 Dr Reisman observed that Playboy magazine included images of children and babies alongside sexualised, pornographic pictures of women. Pictures of a naked “Playmate” were juxtaposed with images of her as a child, “automatically eroticising the girl child.” Reisman writes:

Dr Reisman concluded that “eroticising children in Playboy has had a direct impact on pandemic child pornography addiction and molestation.” She argued Playboy trained its male readers to “believe in children’s alleged sexuality as they would become sexually aroused browsing these materials.”

Dr Reisman’s work exposed various depictions of child sexual abuse in Playboy. Almost all of these portrayed the child as unharmed by it or even enjoying it. Reisman analysed a number of cartoons published in the magazine referencing men’s sexual use and abuse of little girls where a common theme is the girl being the apparent instigator of the ‘encounter’, or as being more sexually savvy than the adult man. 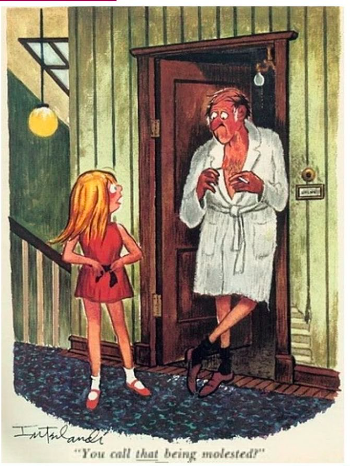 "You call that being molested?" 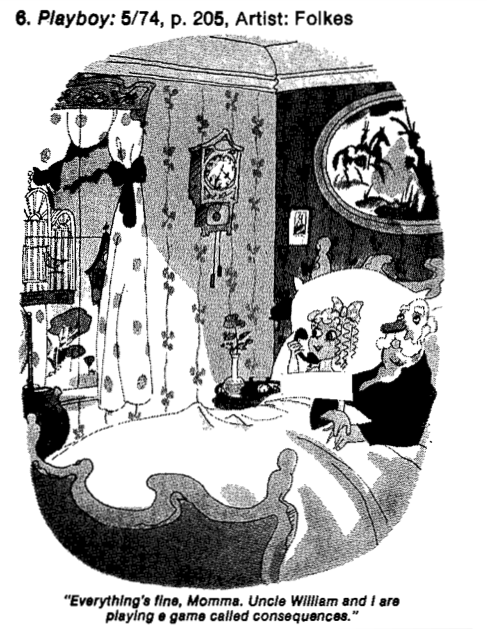 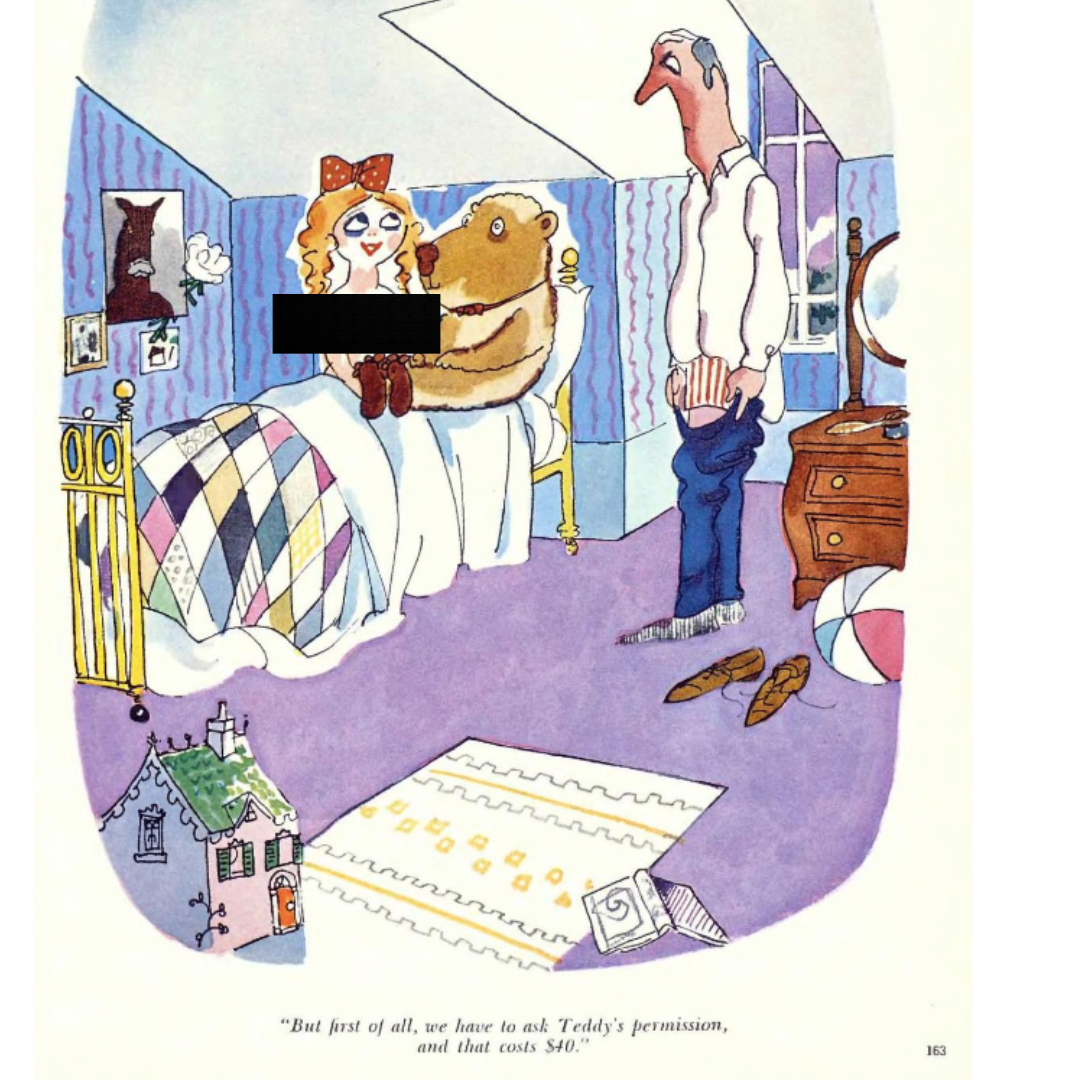 "But first of all, we have to ask Teddy's permission, and that costs $40."

The October 1976 edition of Playboy included a text box with the following quote:

The big news is that there is a lot more direct eroticism flowing through a small child’s body than most adults are willing to acknowledge.

As Playboy’s history of sexual exploitation of women and girls is exposed –  and in the wake of new allegations of drugging, rape and bestiality by Playboy founder Hugh Hefner – Playboy’s parent company PLBY Group are in damage control mode. In an open letter, PLBY Group asserted that “Today’s Playboy is not Hugh Hefner’s Playboy.” 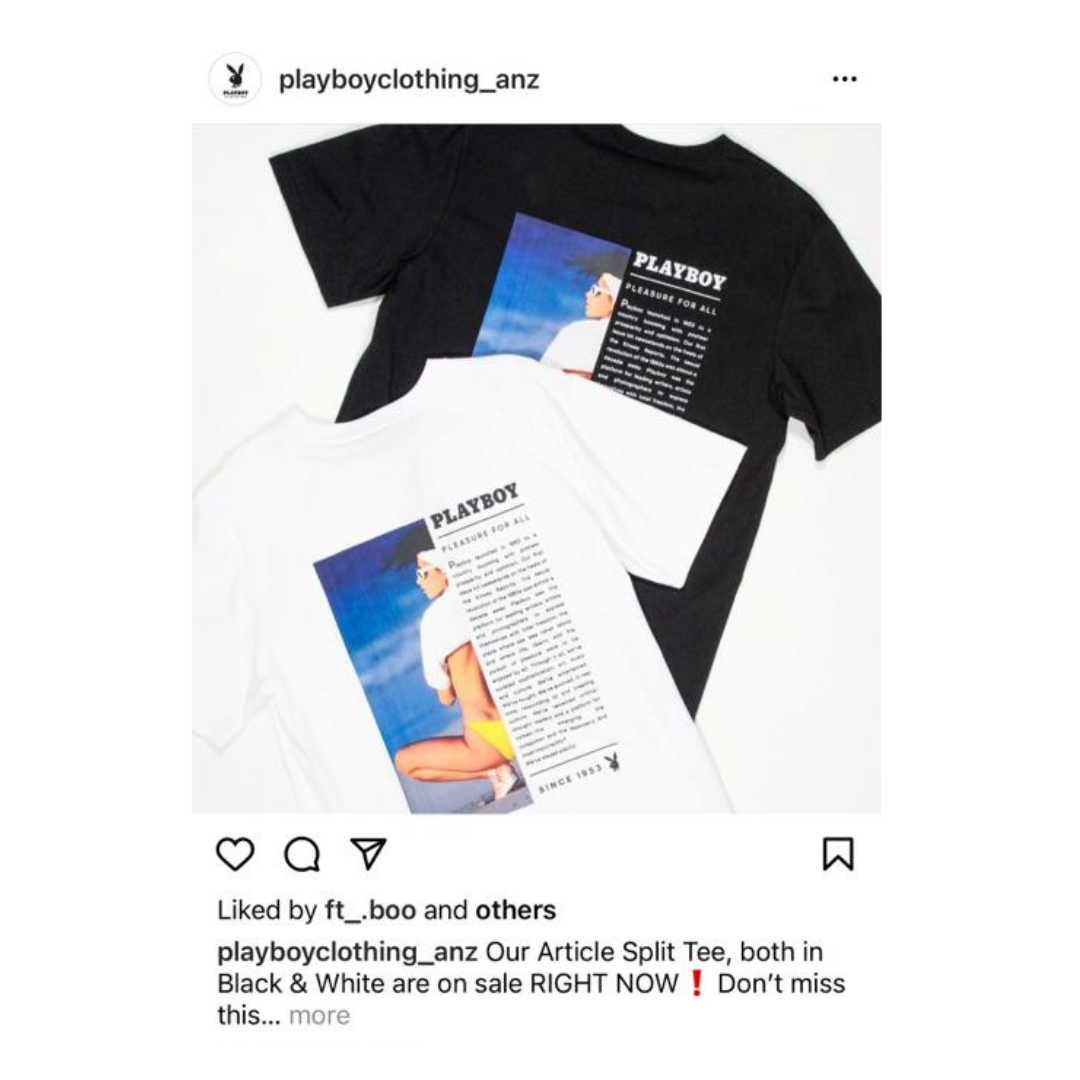 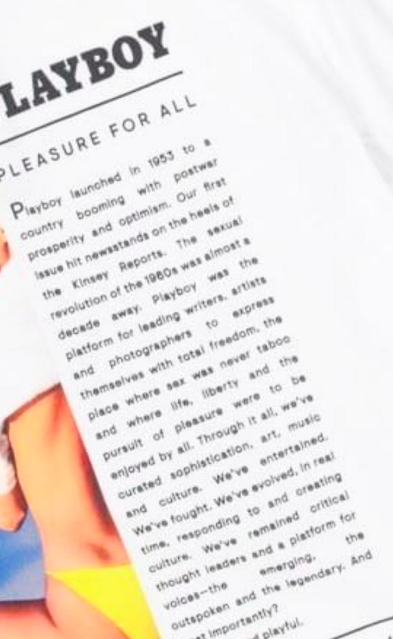 Playboy is premised on the sexual objectification of women and girls. This is precisely what it stands for. It cannot be improved, and it cannot be separated from its long history of mainstreaming and endorsing the sexual abuse and exploitation of women. This is what Playboy is.