A complaint was sent to Priceline which said in part:

(By stocking Playboy) Priceline is not only assisting but is profiting from the proliferation of pornography.

Furthermore, Playboy are well-known for their deliberate marketing of their brand as ‘fashion’ in an attempt to normalise the presence of pornography in the lives and homes of potential consumers. Part of their marketing strategy is to target young girls and boys as a way of normalising its brand to children - in my local Priceline, Playboy gift packs were stocked on shelves at child’s eye level. Worse still, the women’s Playboy perfumes in my local store were being stocked immediately next to a stand full of plastic children’s jewellery and trinkets, while the men’s Playboy perfumes were stocked next to Simpsons merchandise. Why is Priceline, a company whose stores are frequented by tweens, teens and families, selling Playboy merchandise in the first place, let alone in a way which as good as invites the attention of children?

The second issue at hand, is the immense contradiction between Priceline’s promotion of these items and brands, and Priceline’s own branding and community efforts. Your company runs a charity arm called the Priceline Sisterhood, which according to your website was started in order “to do something as a company which would benefit women both locally and nationally in an ongoing way.” Among the charities supported by the Priceline Sisterhood is Moira Kelly’s Children First Foundation." 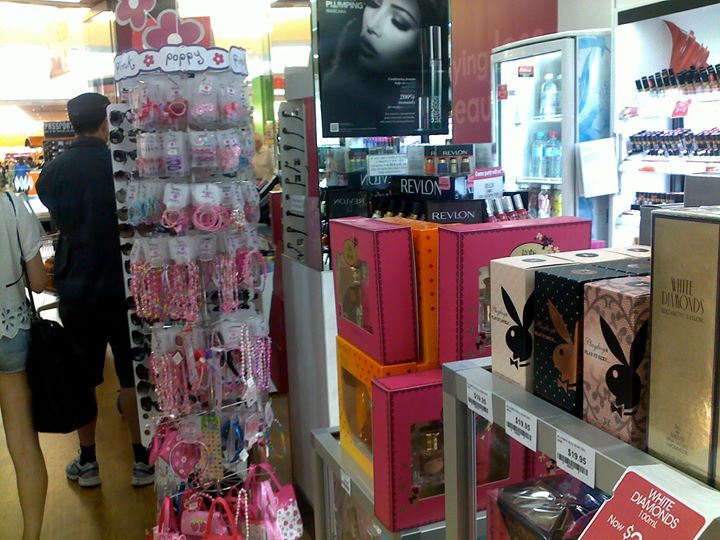 Priceline is a retailer that is at all times conscientious of ensuring the utmost integrity in its ranging of merchandise. The Playboy and Lynx brands of bath toiletries & fragrances are very successful brands available in all leading retailers including Coles, Woolworths, Big W, Target, Kmart and Chemist Warehouse. The ranging of these products in no way condones the exploitation of women. Our customers expect us as a leading retailer to stock market leading national brands and they would be disappointed if we did not offer them this choice.

A follow up email to Priceline pointed out that the issues had not been addressed:

Unfortunately, I seem to be having trouble matching your response to most of the questions I asked in my initial email. Would you mind clarifying a couple of things for me?

I'm aware that Playboy and Lynx are very successful brands - Playboy, in particular, is one of the leading brands of the global pornography industry. I'm unclear, however, as to why the fact that these brands are better than other brands at exploiting women, means that Priceline sells them? Or why the merchandise of the pornography industry is being sold at child's eye height and amongst other products marketed to children?

I'm also aware that other leading retailers stock these brands. I don't expect you to be able to answer on behalf of Coles, Woolworths, Big W, Target, Kmart, or Chemist Warehouse. Just an answer on behalf of Priceline would be very much appreciated.

You wrote that "the ranging of these products in no way condones the exploitation of women'" Playboy and Lynx both have extensive public track records of exploitative and degrading treatment of women. If the word 'condone' means 'to allow, accept or permit' - I'd be really interested to understand how Priceline is able to stock and profit from products which exploit women, in a manner which in no way allows, accepts or permits the exploitation of women?

I note with disappointment that you have not addressed my concerns about the conflict of interest between Priceline's stocking of these items and your charitable efforts to benefit women and children.

Let Priceline know what you think about the Playboy brand here: