And the Advertising Standards Board says its ok

This is a billboard advertisement in Brisbane for Honey B’s strip club. See that building behind the billboard? That’s a school. 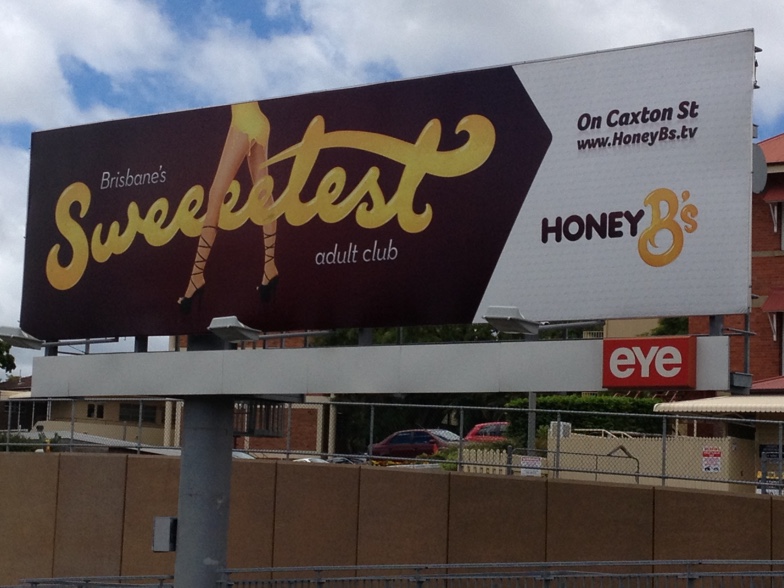 We were recently contacted by school staff about a billboard. Directly in front of a boys school and near a main thoroughfare used by staff and students, the billboard depicts the lower half of a woman’s body straddling the word “sweetest” with 'honey' dripping over her bottom and legs . The text says that Honey B’s is “Brisbane’s sweetest adult club.”

A staff member submitted a complaint to the Advertising Standards Board (ASB) and was promptly knocked back. Complaints about this ad had been rejected before. Click here to read the Ad Standards Board case report. The ASB is unwilling to take into account the ‘product’ being advertised (women’s bodies) and the proximity to schools when making a decision about the billboard. According to the ASB, such details are irrelevant.

This is advertising self-regulation in action, serving the interests of advertisers promoting the sex industry to school children.

Of course this is great news for the strip club which can continue priming its next generation of customers through the classroom window. There is nothing stopping them. They are breaking no laws and will suffer no penalty.

The message received by boys is that they are entitled to treat women’s bodies like any other product. The message to girls - you are a commodity, your body is for sale and there will be plenty of men ready to hand over their cash. If they visit the website – the web address is prominently positioned on the billboard – boys can find out how to access “all three of Brisbane’s hottest adult clubs” including links to the "Love and Rockets" website which includes more explicit content. You need only tick a box to verify that you're over 18.

We’re told by staff that the school works hard to promote respect for women and healthy, equal relationships between men and women.  But its efforts are undermined by an ad industry that doesn’t care and a sex industry that views students as legitimate targets for its advertising.

This is not the first time the school has had problems with strip club advertising surrounding the school. Complaints about "Love and Rockets" billboards were also dismissed. Click here to read the Advertising Standards Board case report.

This image was taken in 2011, a view from inside school grounds. 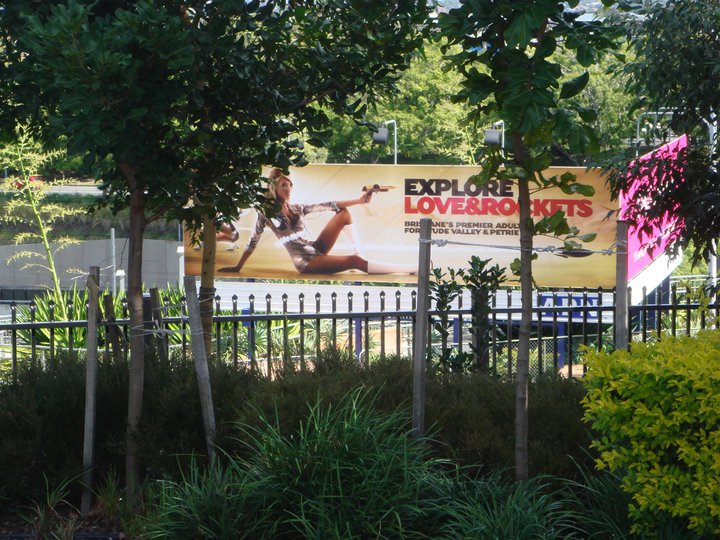 The Ad Standards Board has done nothing. The council won’t touch it. The billboard owner isn’t interested in refunding Honey B’s money.

A petition has been created calling on the Ad Standards Board, The Brisbane City Council and oOh! Billboards to stop allowing the sex industry to target minors.

The petition will tabled in Parliament. This is where we can achieve legislative change. It is vital that as many people as possible take these extra steps to make their voices heard.

We need you to print this petition, collect hand written signatures and post back to:

[UPDATE] Petitions now need to be received by 24th May. Post petitions to the above address ASAP.

Unless something is done at a regulatory level, we will continue to see more corporate social irresponsibility. In addition to signing the above petitions, it is worth writing to your local MP.

A Federal government inquiry into the regulation of billboard and outdoor advertising included in its recommendations:

...that the Australian Association of National Advertisers amend its Advertising Code of Ethics to proscribe sexual objectification of men, women and children.

You can read the full list of recommendations in the report here. (Opens PDF)

Tell them you object to the public space being used to advertise the sex industry, cite an example such as the Honey B’s billboard. You may have another example you would like to include.

Remember, your voice does make a difference. Take action today.

Petition starters Pip Douglas and Tanya Mathias along with Collective Shout's Melinda Liszewski spoke out in this article for the Courier Mail. Read the entire article here. 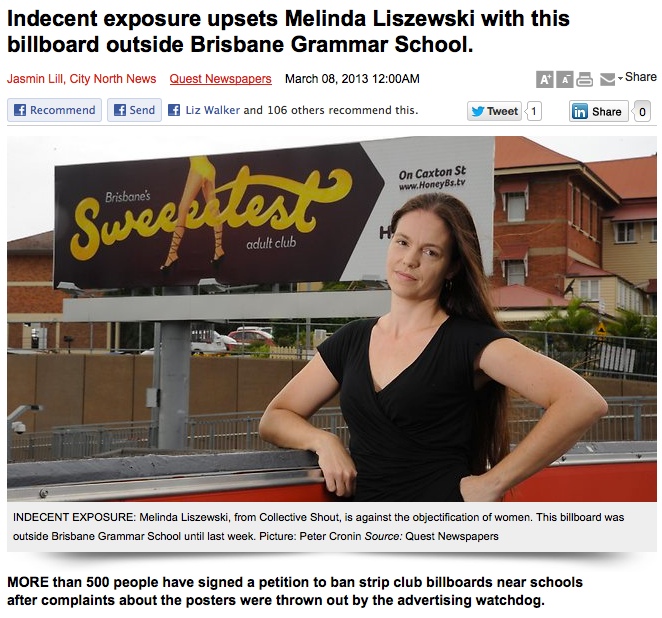