Over 40,000 sign petition calling on Target to withdraw GTA V for extreme violence against women

Grand Theft Auto 5 fuelling the epidemic of violence against women, say survivors in petition signed by over 40,000 people.

[UPDATE] Target and Kmart have pulled the game from sale, will Big W do the same?

We're now asking outlets like Big W and Woolworths whether they're going to stand up against Grand Theft Auto's violence against women as well. 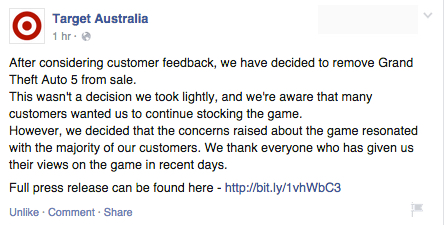 Women survivors of violence are calling on Target to withdraw Grand Theft Auto V from sale, a “sickening” video game that encourages players to brutally murder women for entertainment.

In a change.org petition that has attracted 30, 000 signatures so far, Nicole describes the various ways players can enact their fantasies of committing extreme violence against women, including punching women to the point of unconsciousness, killing them with a bat, gun or machete, running them down with a car and setting them on fire as they continue screaming. 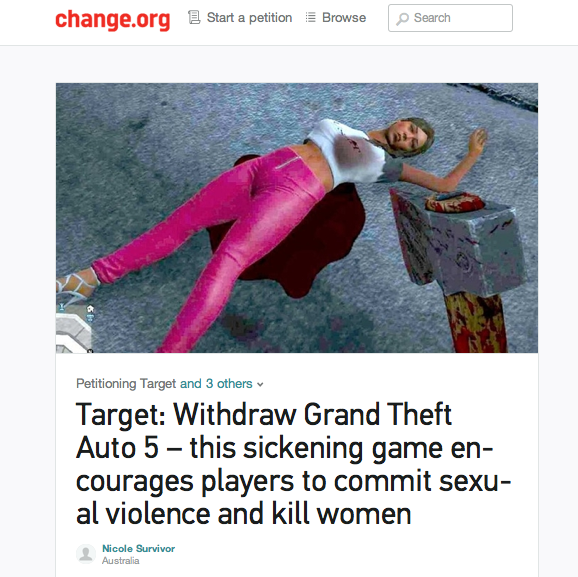 You can watch one of many fan clips where a gamer comments as he enacts using a prostitute and then reversing over her with his car.

"A man has his needs! [In] classic GTA style, you can't let her get away with your money- we're gonna go ahead and back this bad boy up. Do what you gotta do to a regular prostitute!" 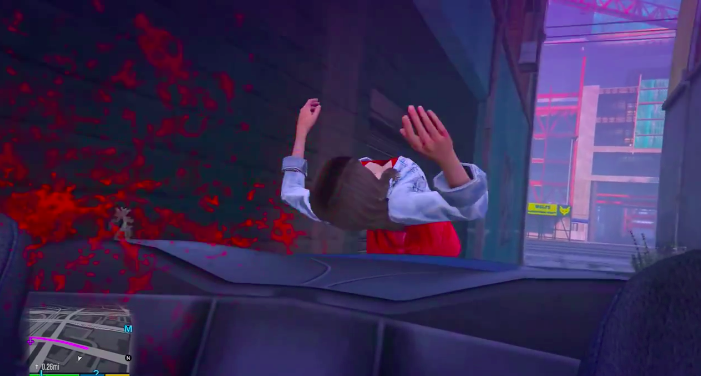 Survivors Nicole, Claire and Kat share disturbing statistics about violence to women in the sex industry, who are up to forty times more likely to be murdered by a man than any other group of women.

"Please Target- we appeal to you as women survivors of violence, including women who experienced violence in the sex industry, to immediately withdraw Grand Theft Auto V from sale," writes Nicole.

“We have firsthand experience of this kind of sexual violence. It haunts us, and we've been trying to rebuild our lives ever since. Just knowing that women are being portrayed as deserving to be sexually used by men and potentially murdered for sport and pleasure – to see this violence that we lived through turned into a form of entertainments is sickening and causes us great pain and harm.”

The petition encourages Target as a so-called ‘family friendly’ retailer to follow the example of New Zealand’s largest retailer, NZ Warehouse group, who chose to put ethics before profits and refused to stock the misogynistic game.

Domestic violence organisations and survivor organisations have supported the call to Target to withdraw GTA V. Brigitte McLennan, manager of SCOPE Domestic and Family Violence Service said as levels of domestic violence were rising the whole community needed to embrace the message that male violence against women was not okay.

Our campaign against GTA V has attracted a lot of attention and comments, particularly from male gamers. There were men who defended their ‘rights’ to live out fantasies of enacting extreme violence against women in the game. They argued playing these games had no bearing on their attitudes towards women. These same men flooded the thread with abuse to women, sexist slurs, hateful language and jokes about violence against women. Apparently the irony is lost on them.

We stand with survivors in calling Target to exercise corporate social responsibility and show they value the lives and dignity of women more than profits.