"We have government-funded campaigns to stop violence against women and yet this behaviour continues in mainstream popular culture," she said.

So here’s the problem. There’s only one reason Tracy Morgan can fill Melbourne’s 2,600-seat Hamer Hall twice in one night, and that’s 30 Rock: a sophisticated, endearing and witty sitcom. But Morgan’s stand-up is none of those things.

This is an unpleasant, graphic, charmless 45-minute tirade – brevity being a rare redeeming feature – sharing his baser instincts in putrid detail, and very little humour.

‘Fucking women are crazy’ he tells us, with his advice to the fairer sex being both, ‘get yo’ ass in the fucking kitchen’ and ‘give that pussy up and stop this bullshit.’ For ‘bullshit’, he means ‘conversation’, I think, for as he taps his head, he warns the men: ‘Once a woman get in there, she live rent-free.’

Let us not assume he is discriminatory about ‘bitches’, though, as he shows no prejudice as to where he sticks his penis: Fat, thin, black, white, disabled – all women can be a receptacle for him. He is something of a vaginal connoisseur, sharing his informed reviews: ‘That pussy be burnt out’; ‘That crippled pussy stays wet’; ‘that pussy stink just a little bit’... there was something about the lubricating ‘discharge’ from a disabled woman too, but I was too busy gagging to write that line down verbatim. Read full story here

It was good to know at least some people walked out. Collective Shout called for those planning to attend his next gig at the Regal Theatre in Perth to boycott the show. We also challenged Regal Theatre to not give Morgan a platform for his misogynist hate speech. 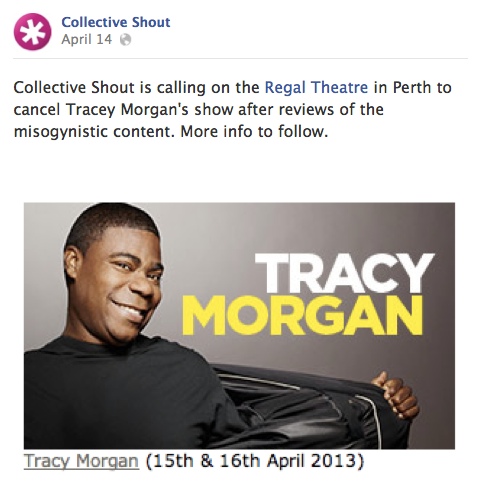 Protests about the show made international headlines and got a lot of people talking about the unacceptability of speaking about women in such a derogatory manner. The Regal Theatre on the other hand, provided us with one of the weakest responses we have ever encountered - discrimination, it seems, is something that they prefer to leave to the acts performing at their venue. 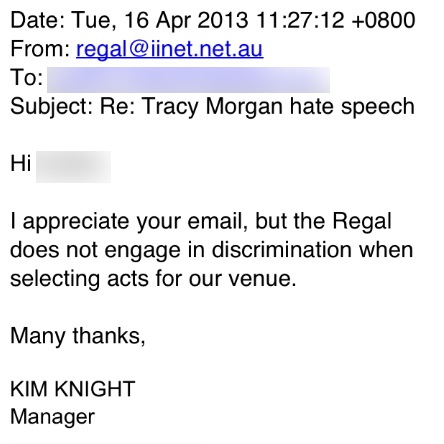 During the Perth show, Tracy Morgan addressed the bad press he had received:

“All I’m trying to do is make people laugh,” he said onstage.

On occasion last night Morgan made jokes at the expense of his enemies and refused the censor his material. “Go home and blog some sh*t ’cause you ain’t gettin’ any,” he said. “I don’t give a f*ck what you think.”  From "The Real Steve Gray."

The deluge of apologists for Morgan's behaviour has been remarkable, even by usual standards. It seems anything is justifiable in the name of 'art' or 'entertainment.'  Some have expressed the idea that the problem is with those who are "offended" and not with Morgan's speech. Collective Shout's SA coordinator Nicole Jameson addresses this:

'If you don't like it leave, or don't go in the first place' IS a defence of misogyny - it's based on the false, apologetic premise that hate speech against women is only subjectively offensive. Sexism doesn't go away if we ignore it, nor if we dress it up as 'edgy humour' or 'boundary pushing' in order to swallow it.

Thanks to all who refused to ignore sexism and misogyny and who spoke out against Tracy Morgan's hateful tirade masquerading as comedy. 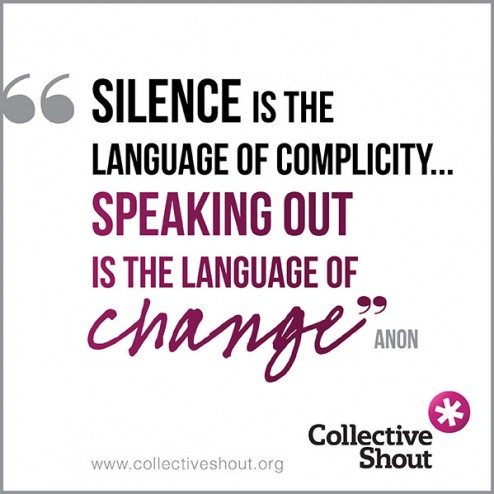 Tracy Morgan responds to our protest against his woman-hating diatribe