Gone in 24 hours. But why does this keep happening?

Well that was quick.

On Tuesday afternoon I posted on my social media pages this hoodie for primary school aged boys. 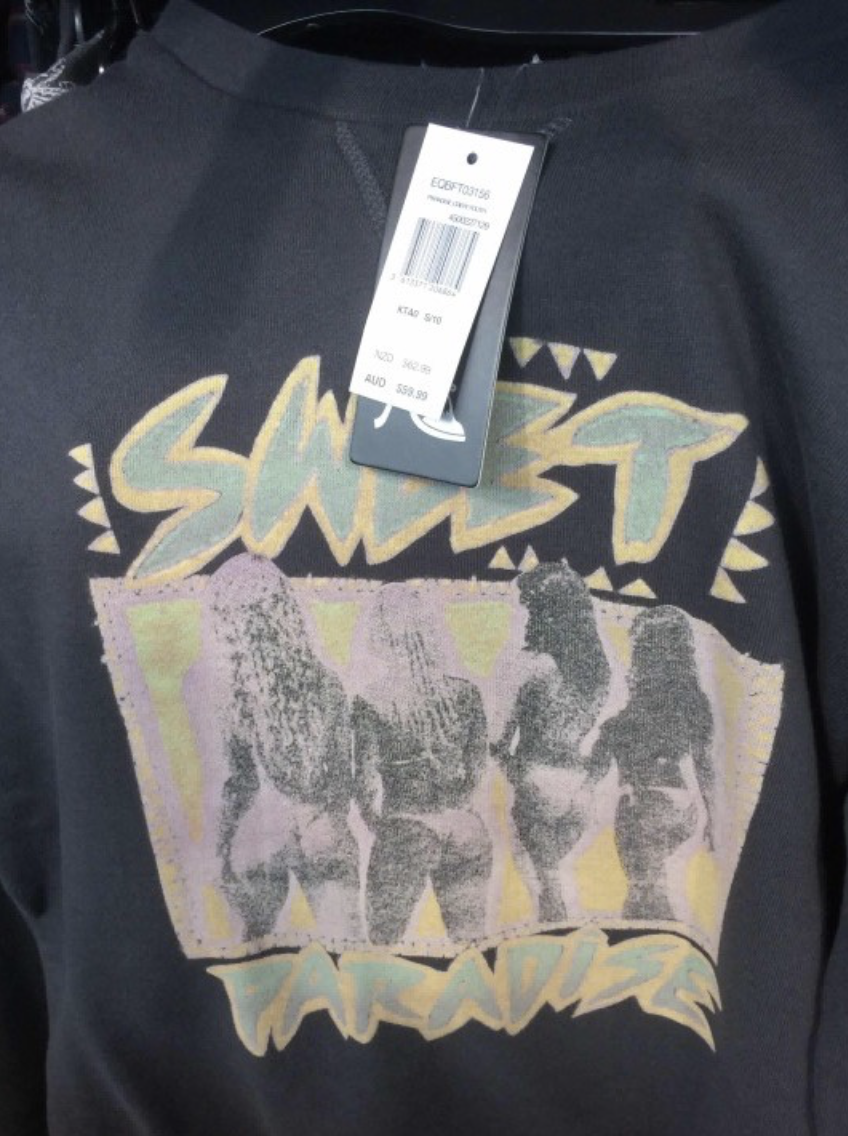 It was found in the Canberra outlet store of surf style chain shop Quiksilver, which describes itself as ‘The World’s Leader in Snow and Surf Clothing’ by Rachel Grant. She’s a mum who was looking for clothes for her 6 and 9-year-old sons who were with her. She then told me about her unfortunate discovery on the rack of clothing in her son’s sizing.

Quiksilver was about to become a world leader in objectified and sexualised clothing for little boys.

At a time when we are (at last) having a global discussion about the mistreatment of women and girls, calling out the bad behaviour of so many predators, gropers, sexual abuse apologists and general thugs and with governments adding in new budget items for respectful relationships programs in schools, corporates like this go about their merry misogynistic ways, creating fashion items which enmesh objectification of women and male entitlement in the culture.

Supporters went into action immediately – women like mother, grandmother and teacher Lisa Ashdowne who wrote in part: “I’m writing to make a complaint about the messages your products and advertising send our children, girls and boys, about who they are in the world, how they should think and behave, where they belong in society, the value they hold for themselves and for others – living in Torquay, I am faced daily with the overriding message that boys and men are valued for their skills and effort in surfing and girls and YOUNG women are valued when they are skinny, semi-naked…being on display, not valued for anything other than another’s pleasure. I will be actively campaigning against your company until your values and guiding principles change and they are EXPLICITLY demonstrated in your products and your communications at all levels”.

Then, the next day, supporters began receiving this message. 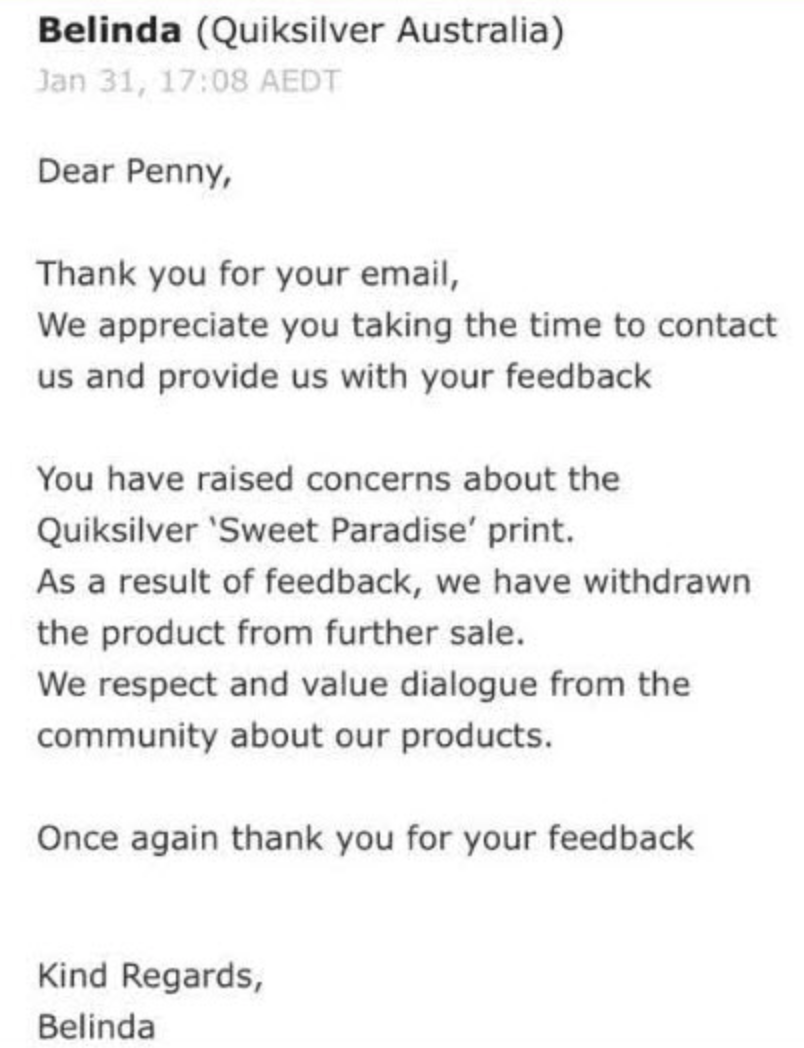 I’ve thanked Quiksilver for their prompt response. And they deserves thanks.

But activist Melinda Liszewski, whose has been working with me in cultural jamming actions for more than a decade, asks this pointed question on twitter: 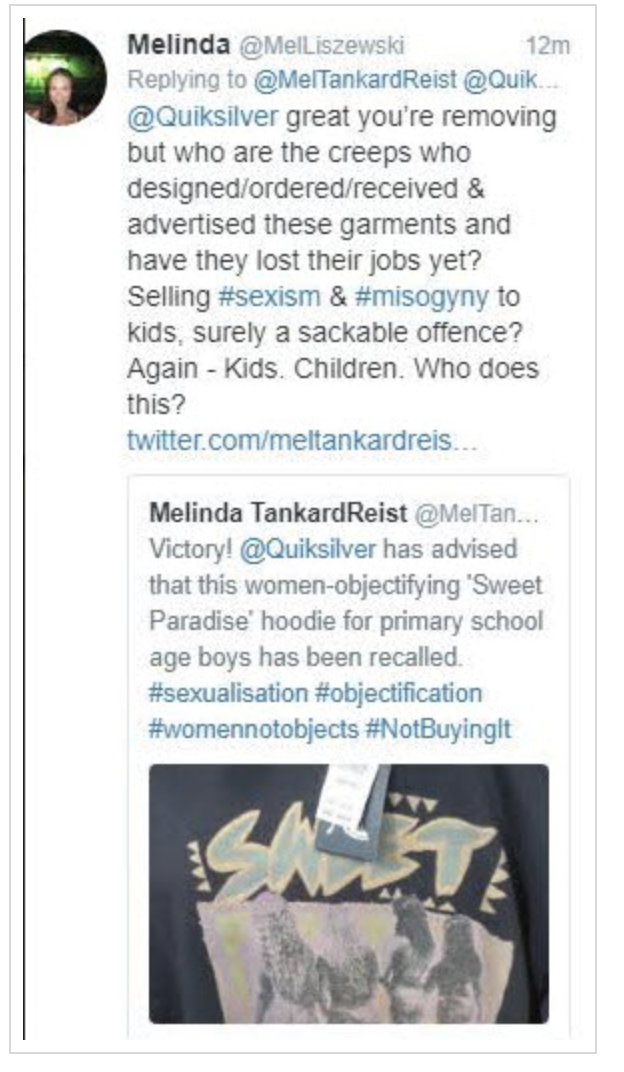 That’s the thing, isn’t it. There are people who decided that plastering semi naked women on a jumper for little boys, suggesting those women are a ‘paradise’ for them to enjoy, is acceptable. There were entire design/buying/marketing departments determining that turning little boys into walking billboards for spreading harmful ideas about women and girls was fine. Where is the quality control? The ethics? The corporate social responsibility?

It’s great to go into the New Year with a win straight up. And we are thankful when companies respond to community concern. But we must remain vigilant and keep fighting until there is genuine change at every level.