The page, used to bully, humiliate, expose and shame young girls had attracted over 200,000 'likers.'

Thousands of complaints have been submitted to Facebook via the page's reporting system and a petition directed to Facebook. Facebook has refused to remove the page, defending it on the grounds of free speech and tagging it as 'controversial humor.'

It has now emerged that the creators of the page are two 19 year old QUT students from Brisbane. James Silverwood and Dominic Terry are immensely proud of their creation and have continued to defend it.

Due to the amount of legal strife that we have been running into about the group, and the fact that we are just two 19 year old guys that obviously can't afford a law suit to their name, we have regrettably decided to close the page, permanently.

I know we have lots of devoted fans that come on here to see the countless arguments and dumb sluts trying to justify themselves, sometimes it's just too personally detrimental to have something like this group and it has to die.

We'll miss you guys. Thanks for everything guys.

Nahhhhhh, just gammin'.
As long as there are sluts, we will put them in their place. Keep the submissions coming guys.
We're not going anywhere. x 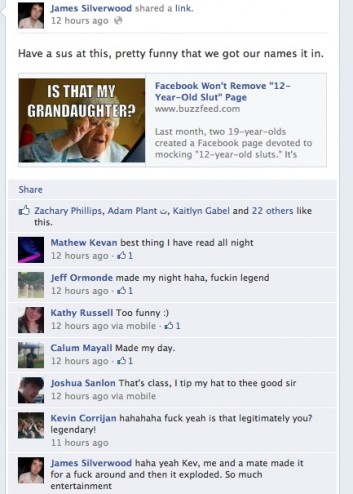 According to Facebook, a page set up to facilitate bullying and harassment of little girls does not violate its policy:

Thanks for your recent report of a potential violation on Facebook. After reviewing your report, we were not able to confirm that the specific page you reported violates Facebook's Statement of Rights and Responsibilities.