News.com reports last tonight that Redfoo has ‘apologised’ to his fans after the backlash to his new track Literally I can’t (also see here).

The message was posted on his Facebook page yesterday afternoon. The message was for his ‘fans, friends and family’ (not, it seems, for the women and girls harmed by his message) who are ‘one in the same’ [sic] According to News:

“Over the years, you’ve connected with me through my music, art and our personal interactions. My greatest joy and mission from day one has been to entertain people from all walks of life: the kids, parents, teens, ladies, gentlemen, cops and even the robbers.

“I get excited to create things that will unite all of us through laughter, dance and celebration. If during that process I offend anyone, I apologize from the bottom of my heart. In the future I will be more mindful of the way I present my art.” 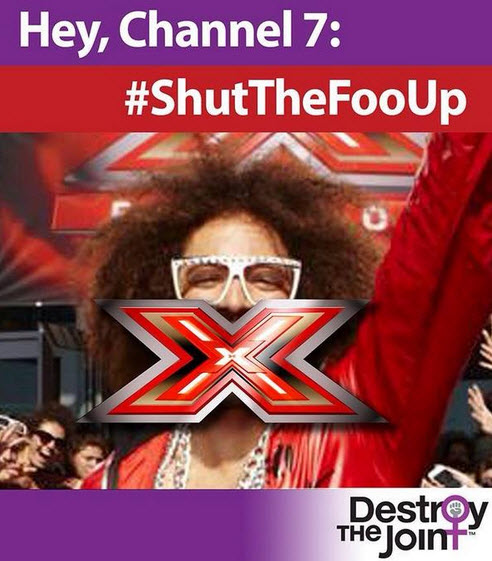 If Redfoo wants to “unite all of us through laughter, dance and celebration” he’s got a strange way of going about it. There’s nothing funny or celebratory in the rape culture promoting track. in which men yell at the women to ‘shut the f**k up’ for refusing their demands and ridiculed and harassed for saying ‘no’.

As activist Jas Swilks, who launched the Change.org petition said, if he really respected women, as he claims, he shouldn’t have produced a video clip which showed the opposite. News also quotes me:

Ms Tankard Reist said Channel 7 shouldn’t provide a platform for someone who normalised sexism and intimidation of women.

She added as an X Factor judge and celebrity Redfoo had enormous influence and was helping perpetuate the notion that treating women like this was okay.

Redfoo doesn’t even mention the song, the outrage, the reason for the ‘apology’. He turns it into a matter of personal offence – “If…I offend anyone” – rather than an acknowledgement of the harms he has done in the name of his ‘art’ (including lyrics and video clip of this nature in the category ‘art’ is a discussion we’ll have to leave for another time).

There is an epidemic of violence against women which music like this feeds and fuels. Literally I can’t excuses and justifies male predatory behaviour. Redfoo has reduced a systemic issue into an issue of personal feelings – a common pattern of men who engage in misogynistic behaviours – not playing their part in collective responsibility.

We must continue to #shutthefooup and demand Channel 7 and X Factor cut ties. We’ve achieved almost 18,000 signatures on the petition now: how long before we get a response from them? If you agree that this is a crap excuse for an apology, sign the petition.