Actually, we're pretty sure they are

We laughed out loud when a Collective Shout supporter sent us a scan of the latest Rivers Catalogue. Have they really created a catalogue cover just to have a go at us? 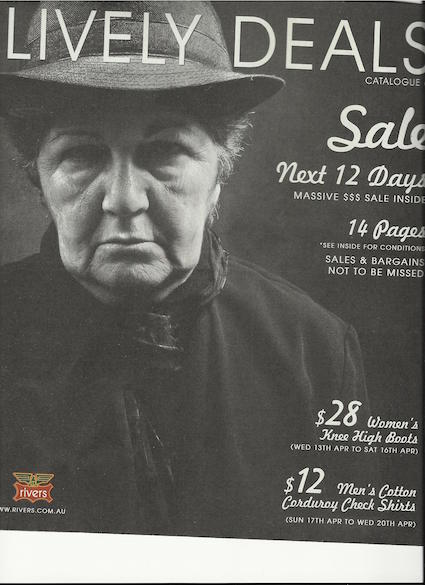 'Lively Deals' follows on from last months '10 Deadly Deals' which we had challenged for it's depiction of violence against women to sell clothing.

Many were disgusted with their portrayal of a dead woman to sell products and also baffled as to why on earth Rivers would use this image to sell cheap cardigans.

It is clear to us that 'Lively Deals' is a shot at those who sent complaints to Rivers, playing on one of the many stereotypes used to dismiss  concerns about sexual objectification and portrayals of violence against women. This stereotype says that it is only older, unhappy women (perhaps with 'old fashioned values' maybe they're even 'old prudes') who speak out against sexual objectification.

As a movement challenging sexploitation in our culture, we've heard it all, we're ugly, we're overweight, we're old, we're anti-sex and we probably hate men. But this is the first time we have had the honour of being told off by a major retailer in picture form. The funny thing is, most people picking up the catalogue won't get the reference, but we do! They devoted their catalogue to an attempt at insulting us, isn't that nice?

Seriously though, what Rivers has done here is ageist. By using this stereotype, Rivers have insulted older women. (Because they hadn't dug themselves into enough of a hole already with sexual objectification and glorifying violence against women). The message here is: if you speak out against sexploitation, you must be old and therefore you and your views are to be mocked.

Collective Shout is a growing movement challenging sexploitation in our culture. We are as diverse as can be. We are young women and older women. Some of our supporters aren't women at all but are men who understand that a dead woman is a tragedy, not a marketing tool. The activism and voices of older women are just as valued as those of younger people. They are entitled to voice their opinion without being insulted in return.

Rivers, we suggest you hire a new marketing director but here's some free advice: try featuring items that you actually sell on the front cover of your catalogue. Also, where can we get those hats?