"...the bodysuit of the woman on the left was extremely high cut and a large amount of the woman’s pubic mound was exposed." 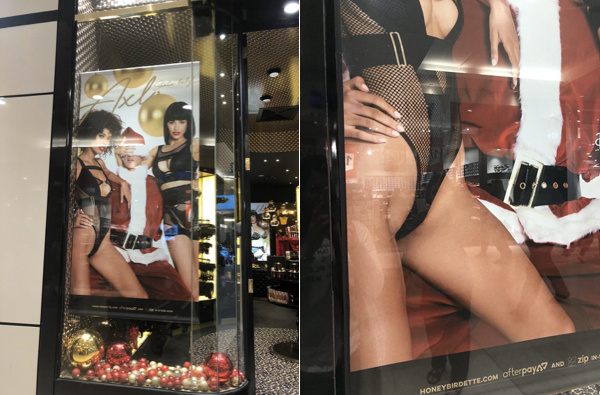 Despite the explicit nature of the product openly advertised online and in stores, it took Ad Standards more than a month to decide the ad violated the ad industry code of ethics. One of the complainants saw the ad in stores on December 16, but Ad Standards' determination was published on the 22 January 2020.

The determination considered two sections of the code of ethics, Section 2.2 and 2.4.

The panel first dealt with section 2.2

Section 2.2 of the code states: “Advertising or marketing communications should not employ sexual appeal in a manner which is exploitative or degrading of any individual or group of people.”

“The Panel noted the complainant’s concern that the advertisement objectifies the women.“

The Panel noted that the advertised product is lingerie and the advertiser is justified in showing the product and how it would be worn provided that in doing so it meets the provisions of the Code. 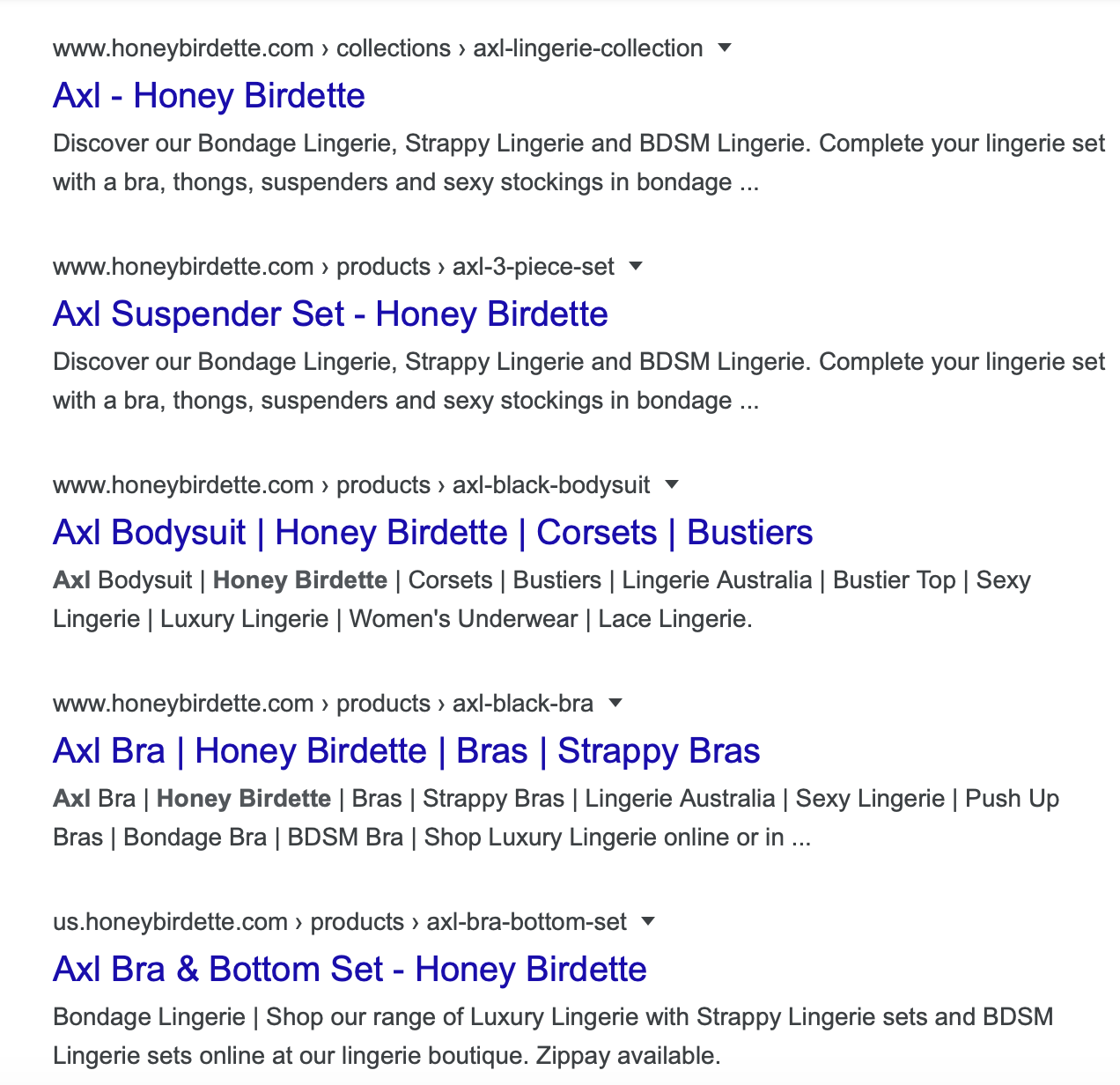 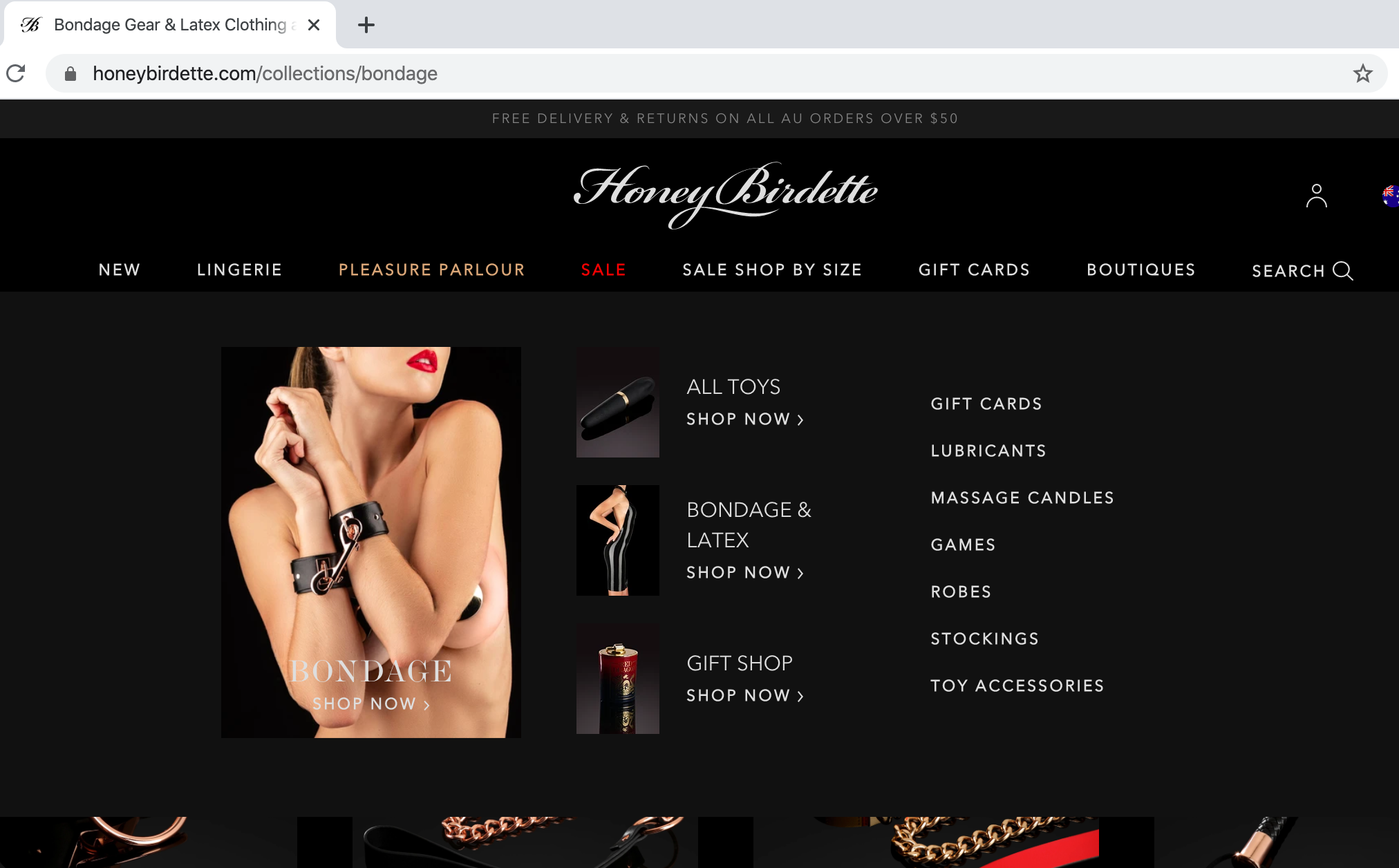 The Panel noted the AANA Practice Note which provides guidance on the meaning of the terms exploitative and degrading:

Exploitative - (a) taking advantage of the sexual appeal of a person, or group of people, by depicting them as objects or commodities; or (b) focussing on their body parts where this bears no direct relevance to the product or service being advertised. Degrading – lowering in character or quality a person or group of people.

The advertising under consideration is for a sex shop, so it would be near impossible for images depicting women posing in lingerie or BDSM Lingerie to not "take advantage of the sexual appeal of a person or group of people, by depicting them as objects or commodities" or "focus on their body parts where this bears no relevance to the product or service being advertised." These ads will always focus on women's body parts because that is the purpose of the product they sell. Such focus on women's bodies or body parts is what underpins the entire sex trade. Honey Birdette is no exception.

The Panel then considered whether the advertisement used sexual appeal in a manner that was degrading of an individual or group of people.

The Panel considered that the depiction of the models and the accompanying text did not lower the character or quality of the model and did not use sexual appeal in a manner that was degrading of the model.

The Ad Industry and its system of self-regulation believes it is entitled to its own facts. It is on these false "facts" that the panel made their determination. 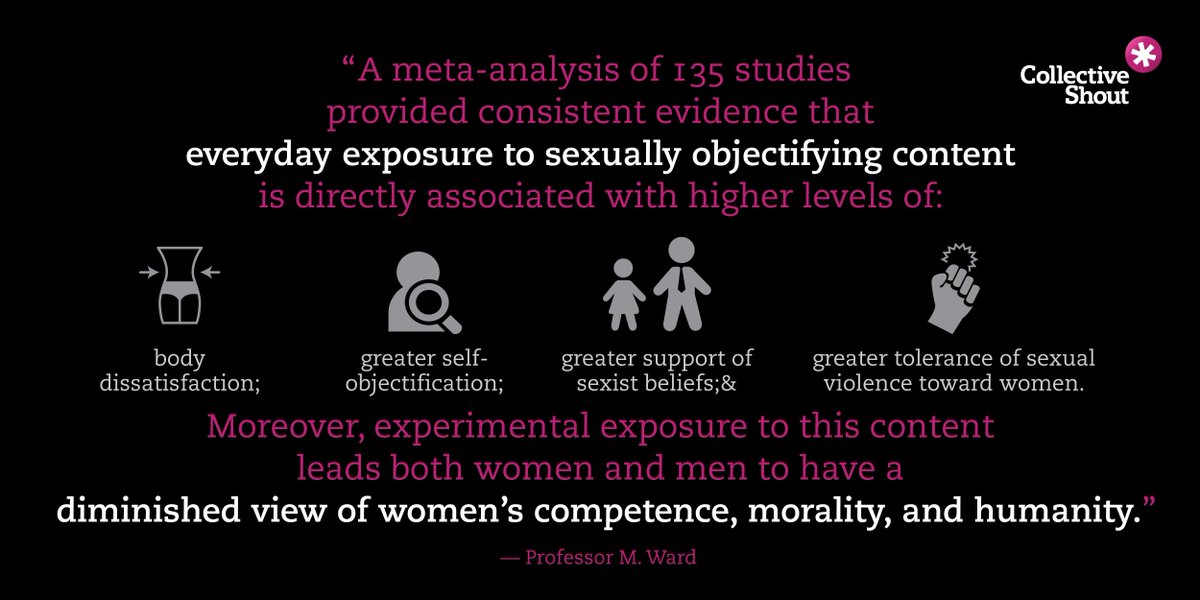 So, in defiance of 135 studies reinforcing the harm of sexual objectification to women and girls:

On that basis, the Panel determined that the advertisement did not employ sexual appeal in a manner which is exploitative or degrading of an individual and did not breach Section 2.2 of the Code.

The panel then dealt with section 2.4

Section 2.4 of the Code states: “Advertising or Marketing Communications shall treat sex, sexuality and nudity with sensitivity to the relevant audience”.

The Panel noted the Practice Note for the Code states:

“Images which are not permitted are those which are highly sexually suggestive and inappropriate for the relevant audience. Explicit sexual depictions in marcomms, particularly where the depiction is not relevant to the product or service being advertised, are generally objectionable to the community and will offend Prevailing Community Standards.”

The Panel noted that the bodysuit worn by the model in on the left was very high cut and left a large amount of the woman’s pubic area* exposed. The Panel noted that the lingerie worn in the advertisement is available for purchase at Honey Birdette, however considered that products must still be advertised in a manner that is suitable for advertising on the front window of a store that is located in a shopping centre.

The Panel considered the Practice Note for the Code which provides:

“Full frontal nudity and explicit pornographic language is not permitted. Images of genitalia are not acceptable. Images of nipples may be acceptable in advertisements for plastic surgery or art exhibits for example.”

The Panel considered that although the women’s cleavage was visible, their full breasts and nipples are not exposed, and there is no focus on the women’s breasts in the advertisement.

The Panel noted that the woman on the left’s genitals were not visible and there was a focus on her pubic region* due to the style of the lingerie. The Panel considered that most members of the community would consider this to be a high level of nudity.

The Panel considered that the advertisement included an image of a man dressed as Santa, and that this would likely attract the attention of children passing the store.

The Panel considered that the high level of nudity in conjunction with an image of Santa did amount to a depiction which did not treat the issues of sex, sexuality and nudity with sensitivity to the relevant broad audience.

The Panel determined the advertisement did breach Section 2.4 of the Code.

The part of the woman's body described by the Ad Standards Panel as the "pubic area" and "pubic region" is known as the "mons pubis." This external genital organ is part of the "vulva." It is false for Ad Standards to say that the mons pubis was exposed and then later say the genitals were not exposed.

THE ADVERTISER’S RESPONSE TO DETERMINATION

The advertiser has not provided a response to the Panel's determination. Ad Standards will continue to work with the advertiser and other industry bodies regarding this issue of non-compliance.

"Ad Standards will continue..." Continue what exactly? Who are these other industry bodies Ad Standards is working with? Should we be writing to them instead? And how is the Ad Standards Panel going to "continue to work with the advertiser?" Will Ad Standards continue sending them notices they choose to ignore?

If Ad Standards is going to continue making statements like this when an advertiser ignores them, some details and transparency would help in not insulting the intelligence of those who used their personal, valuable time to make a complaint.

You can read the full Case Report here. 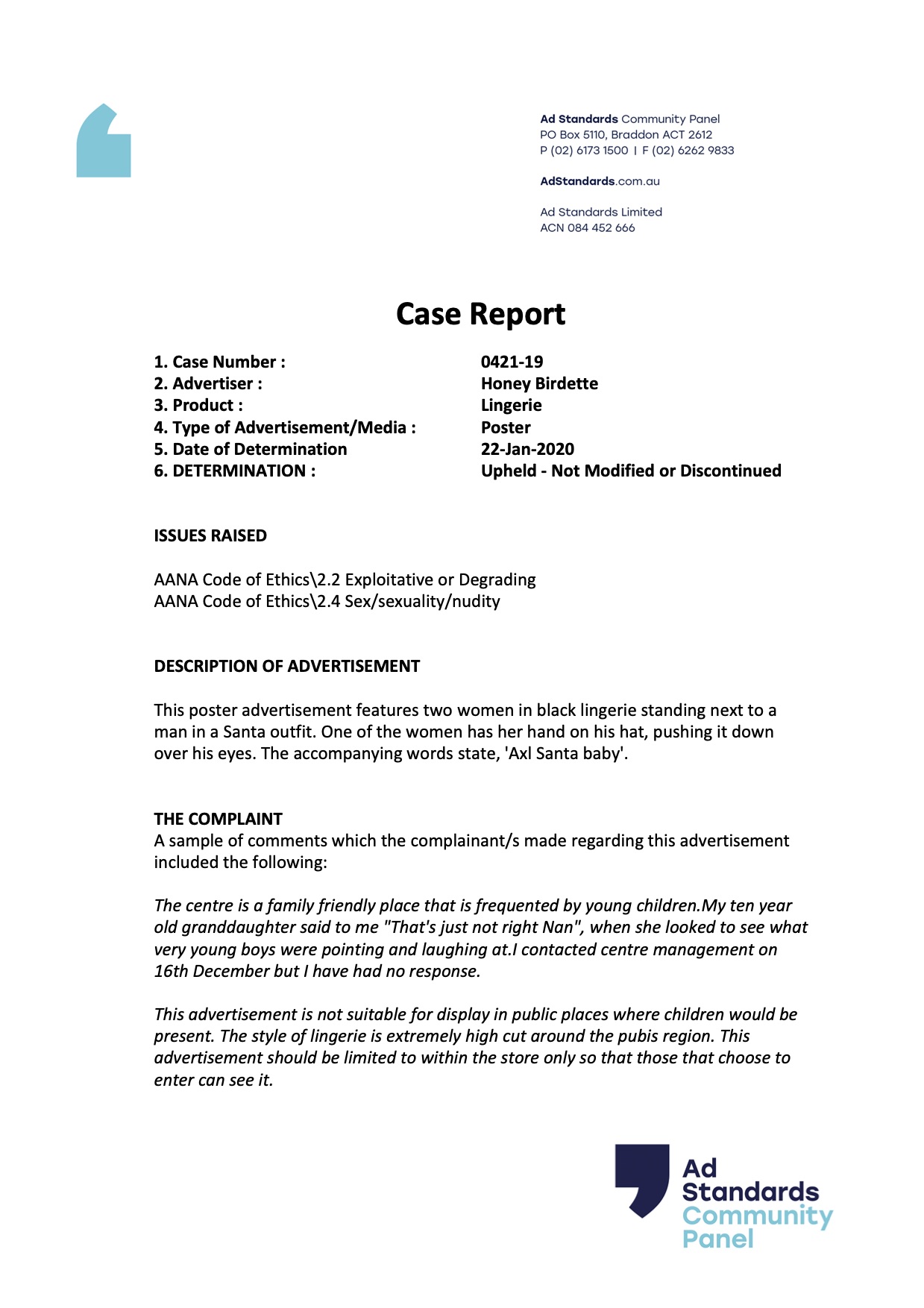 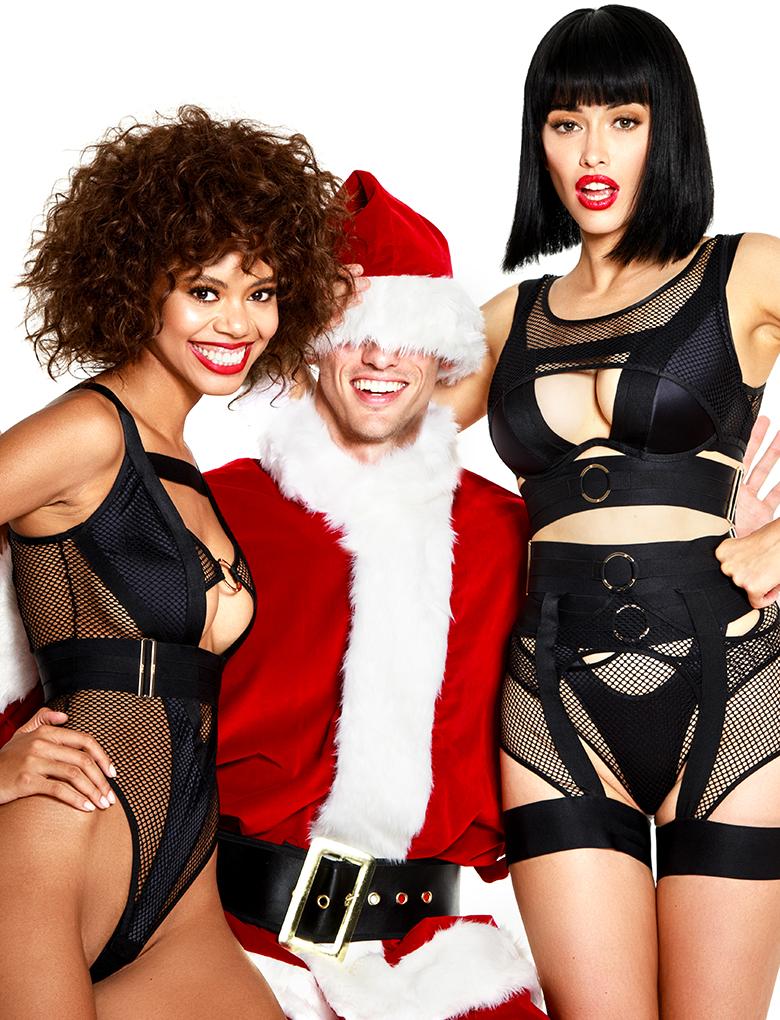