Collett Smart, child adolescent psychologist and educator reports on the child beauty pageant recently held in Sydney. Collett was invited by Today Tonight to give an outsider's opinion on the event.

“She’s a gorgeous girl isn’t she?”

“Give them a round of applause, aren’t they stunning?”

“What a lovely dress!"

“Wow, Sydney Australia, where did you get these beautiful girls?”

Notice a superficial theme anyone?

As with last year’s event, the feathers, false nails and fake tans were rolled out alongside the rhinestones and ruffles. I’m not talking about an adult cabaret routine, oh no – these were girls from 3 years old and up.

You guessed it - the pageants were back in town, with Mickie Wood and her daughter Eden (who has retired from competing to teach other girls about pageantry at the ripe old age of 6) along for the ride. And Mickie was one of the judges this year.

“We didn’t know they were here?” I hear you say. Well, it appears to have been kept a secret. Although, I’m told by some pageant organisers that it wasn’t...

Saturday saw Universal Royalty Beauty Pageants (and Eden) strutting their stuff at the Paddington RSL in Sydney.  The day before, I was invited to attend the event by Today Tonight and provide comment on what I saw, since nothing had been publicly advertised. (Something to hide maybe?) 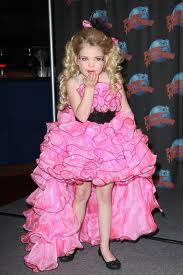 The room had a guard at the door and no signage anywhere inside or outside the RSL to indicate that the event was being held there. Contrary to what some thought, I sat openly amoung the crowd.

So was anything different this year? Yes and No.

There was a similar line of costumes and categories as last year, but only about a third the number of people. How do I know numbers were lower? Because I attended last year's pageant (by personal invite) as the only ‘outsider’ then too. (See my story here)

As with last year, the competition had entrants from various locations around Australia. However, this year there were only between 2 and 4 entrants per age group and some age groups were not even represented.  In the words of a mum seated in front of me,

“B really wanted to enter but there weren’t enough entrants for her age group, due to all the secrecy and everything.”

So when the mothers tell me on my Facebook page "They like to keep numbers low” I don’t buy it. We don't hold secret soccer matches now do we?

As before, the competition was ‘tough’, well according to Annette Hill anyway. “Oh my goodness judges, how are you going to choose who will win the $1000?”, she asked repeatedly.

How would they indeed - and why should they choose anyway? What gives these adults the right to nominate someone else’s child as a winner, by virtue of the skin they were born in?

The main category again saw the girls wearing evening gown style dresses. "Here we have S wearing an X colour dress accentuated with rhinestones and ruffles. She has X colour hair and X colour eyes, her favourite food is X, her hobbies are X and Y."

Sounds more like a pet parade than actual children who should be celebrated for their unique gifts and skills.

To the credit of 3 of those amazing teens, they had ambitions of being a brain surgeon, a police woman and a teacher. My message to those girls, “Get out of that toxic culture before it steals your soul and makes you think that you are only worth the shade of lip gloss you wear.”

All this happens while parents cheer on with, “Sparkle baby!”

Sparkle baby? Are you kidding me? What is that? The only thing that ‘sparkles’ are the rhinestones on the ruffles because what do pageants teach young girls to ‘sparkle’ in? The  answer - Beauty, outward appearances and 'poise' (thanks Annette for that one). Not skills, sporting ability, artistic ability or inner qualities.

My heart broke when I heard a tiny 4 year old come directly off the stage and ask, “Mum, did I do ok?”
"Do ok at what mum?" I wondered.

Do ok at looking pretty or wearing her lipstick correctly? And what if she doesn’t win her age group? Obviously she didn’t ‘do ok’ then? Well that’s the message she gets even if indirectly.

If she didn’t 'do ok' at looking pretty enough, what does she do now mum? She can’t go home and practice looking prettier? Sure, she can wear a new dress or buy a new shade of eyeliner but she can’t change who she is and what she was born with.

What if she’s never ‘ok’ enough to win? What does that do to her then mum? How will she see herself in comparison to other girls? Does she ‘throw up’ to look as skinny as contestant B? Ask for breast implants at 16 to look like contestant C?

But it’s all ok apparently, because Mickie Wood who was a judge this year, told us that we needed to cheer the girls on so that they all felt special (but obviously not special enough to win the $1000 for something they cannot ever get better at).

Mickie and Annette also assured us that each girl would 'feel valued' because they would get a free photo with Eden Wood, a Universal Royalty t-shirt and other goodies. Um... ok?

The fact that this event was kept a secret is a win in my mind. Except, when I dared say that on my Facebook page on Saturday, I was initially told that this was completely untrue and that I was a just a spy, a stalker and a grown up bully. Although I'm not really surprised when I speak out and  I get these types of comments. They are similar to the ones I received during last year's pageant when I was told to go and F...myself, shoot myself and that I was obviously just jealous. Old news...

So, besides looking like there was something to hide, the secretive positioning possibly kept others from enrolling and also kept less young girls from being exposed to Universal Royalty’s toxic culture than last year. All good to me.

Last year saw The Darebin City Council ruled that their venues can no longer be used for an event where children aged 16 years or under compete on the basis of, or are judged upon, any aspect of their physical appearance. The policy states,

"Organisers will have to ensure that adjudication is based solely upon a child's skills or talents; the routines, music and costumes are age appropriate and all competitions are carried out in a spirit of encouragement."

Australia also saw hundreds of child development experts and child psychologists speaking out against the harmful effects of pageants on children.

"Direct participation and competition for a beauty prize where infants and girls are objectified and judged against sexualised ideals can have significant mental health and developmental consequences that impact detrimentally on identity, self esteem, and body perception.” (The Royal Australian and New Zealand College of Psychiatrists)

So while this is a 'free country' and parents are free to 'parent' in whatever style works for their family, there are certain issues around which I will continue to be an advocate for children. These include; children being supplied with alcohol, tobacco or other harmful substances and children being physically or emotionally abused. I have to say that I stand by the voice of the RANZCP and believe that child pageants fall within the realm of developmental abuse.

The biggest irony of the day was watching a group of teen girls engaging in martial arts in a room next door. These girls were learning to use their bodies in a manner that builds strength and develops healthy self-confidence. My hope is that each Toddlers & Tiaras girl will one day get that opportunity.