Vibrators and lubricant aren't commonly found in the light and bright surrounds of your local shopping centre. But that could soon change with adult entertainment chain Sexyland set to move into traditional retail space.

Sexyland owner Angelo Abela is in discussions with major shopping centre owners to bring his range of adult products to a much broader, and more lucrative, market.

“We would do it very tastefully and we would look very carefully at what we could put into shopping centres,” Abela says.

If the ambitious move into shopping centres gets the green light, Sexyland stores would need to comply with strict conditions.

“We're mindful of what we can show, what we sell in the premises as such and we would concentrate mainly on product which isn't restricted to adult premises,” Abela says.

“We would never go into it if it wasn't accepted by consumers.”

If Sexyland is introduced to shopping centres, vibrators – its main revenue source – cannot occupy more than 10 per cent of a store's floor-space and must not look phallic.

Abela says his company is focusing only on Victorian shopping centres for now and he expects an outcome by Christmas.

“We would do it very tastefully and we would look very carefully at what we could put into shopping centres,”

Tastefully? Does that mean he won't be selling Sexylands replica anus labelled "bumpy bitch" or the "life like" replica human heads called "fuck my face?"  Will the devices labelled "virgin snatch" and "young tight snatch" eroticising sex with young girls be included?

Yes they would. Sexyland's marketing will make sure it is accepted by consumers. In fact they've already started the desensitising process by telling us "only 10% of floor space will be vibrators" and the store will be done "tastefully."

Sex shops in shopping centres, its been done 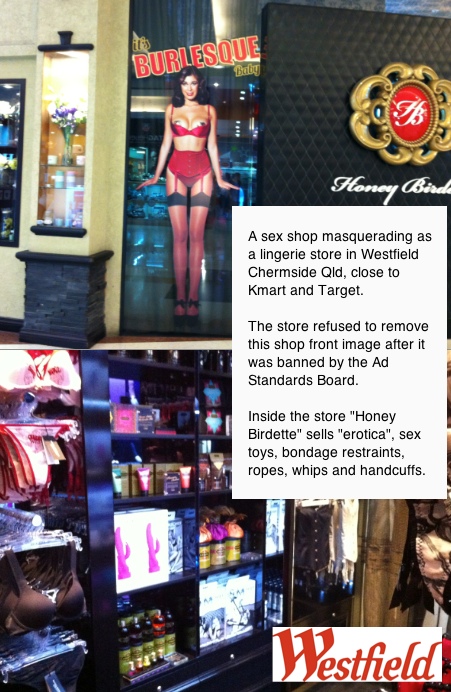 Some time ago Collective Shout supporters made complaints to the Ad Standards Board about what appeared to be a lingerie store in Westfield Shopping Centre Chermside.

The shop front window featured an enormous sexualised image of a woman in lingerie, her breasts mostly exposed accept for stickers covering her nipples. Complaints to Westfield Centre Management in Chermside were knocked back. According to Management, the store hadn't breached any standard.

The Ad Standards Board didn't agree and determined that the ad was in breach of section 2.4 of the advertising code of ethics, stating the advertisement was "sexualised and not appropriate for display in a shop window where a broad section of the community including children could see it." (Read determination here)

It is generally expected that advertisers should remove advertising that is in breach of the advertising code of conduct. However, the image remained on display weeks after the Ad Standards Board upheld the complaint. In the determination dated 14th March 2012, the store claimed it was waiting for "designs and sign writers" and the image would be changed "as soon as possible next week."

Weeks later we noticed the shop front image had not been changed. We sent an enquiry to the Ad Standards Board on the 27th of March 2012 pointing out Honey Birdette's non compliance with the ruling. We were then told the advertiser planned to have the image changed "by Thursday at the latest." Given that shop front imagery for this store is changed periodically anyway, it is safe to say that they did not take down this image any earlier than they had originally intended.

No penalty, no incentive to not repeat the behaviour in future and another example of why ad industry self regulation does not work. Honey Birdette continues to produce more objectifying, hyper sexualised imagery for a broad audience walking past their stores. 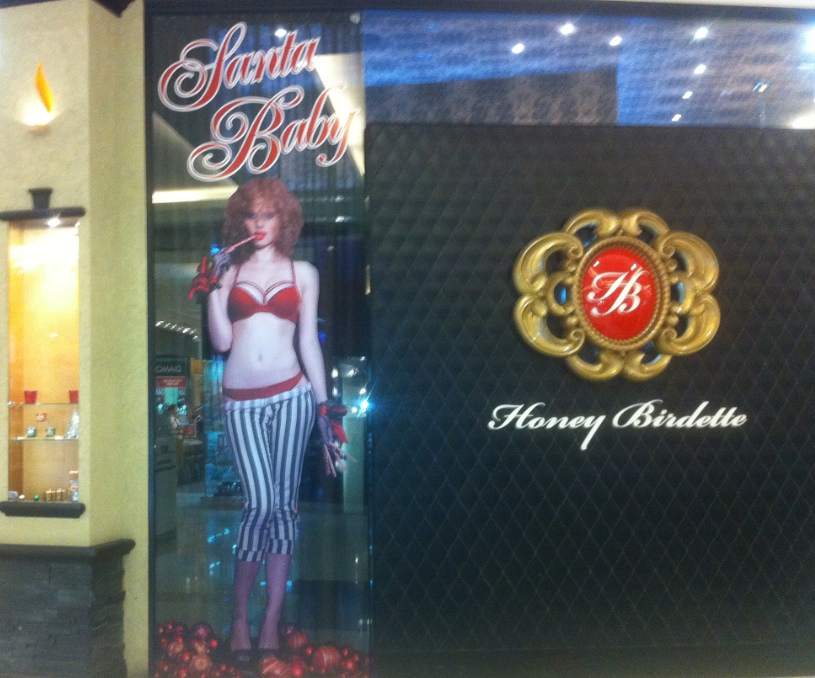 So what do you think? Should sex shops be allowed in major shopping centres?

Google the contact details for your local shopping centre's centre management. Phone or email them and ask what their policy is with regards to sex shops and pornography on their premises. Mention the article from the Age and make it clear that you would not support moves to have sex shops in the shopping centre.

Who is this major retailer then? We will keep you updated.