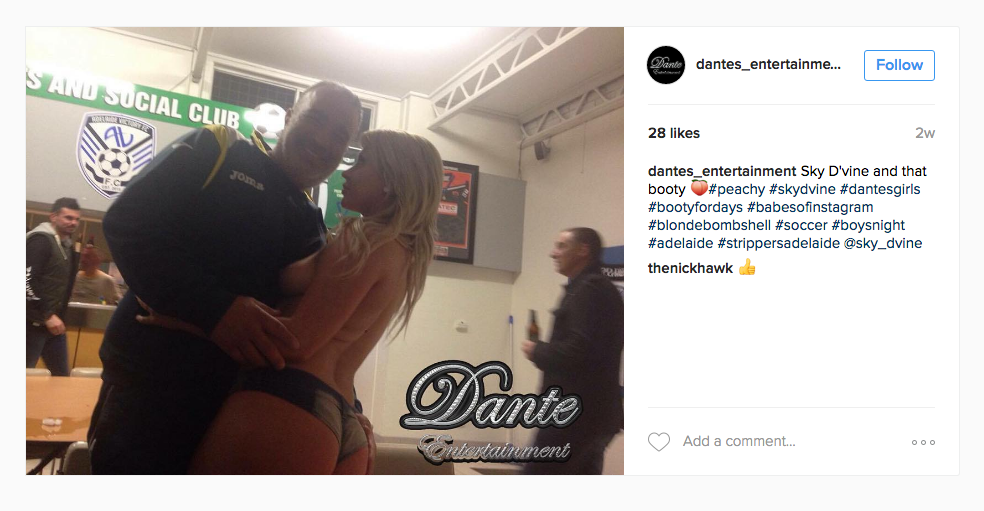 In this case, however,  Adelaide Victory (the team logo featured in the picture above) are a part of the Football Federation Australia (FFA).

The FFA have a strict code of conduct which aims to "aims to promote and strengthen the reputation of football in Australia by establishing a standard of performance, behaviour and professionalism for its participants and stakeholders."

The code includes but is not limited to:

Australia has a serious problem with domestic violence. Recent government initiatives to educate and reduce men's violence against women highlight the major drivers behind this scourge - gender inequality, sexist and hostile attitudes towards women, a culture of objectification and disrespect for women. When men treat women as objects of sexual recreation, when men justify their entitlement to use and exploit women, when men pay for sexual services - they are part of the problem.

Far from being harmless fun, the sexual exploitation of women in the stripping industry and other forms of the sex trade has a great impact on woman involved. See research from Coalition Against Trafficking in Women Australia:

"In a US study, women in strip clubs frequently reported being ‘spat on’ and ‘sprayed with beer’, they report having cigarettes flicked at them as well as trash, condoms, golf balls and even dead animals (Holsopple, 1998). Men reportedly ‘pull…women’s hair’, ‘yank…them by the arms and ankles, rip… their costumes and attempt…to pull their clothes off’. Women are ‘bitten, licked, slapped, punched, and pinched’ whilst male buyers attempt to penetrate them vaginally and anally with ‘fingers, dollar bills, and bottles’, according to the testimony of Kelly Holsopple who worked in a strip club for a number of years, and then went back to research the venues (Holsopple, 1998). In her research she found that 100 per cent of strippers she interviewed reported being abused within the clubs. Holsopple’s research is highly relevant to the Australian context where dancers face violence not only from their male ‘customers’, but also from club owners." Read more here.

We have reached out to the FFA for comment directly and also notified them on social media. They forwarded our request for comment to FFSA who have replied.

Thank you for the opportunity to provide comment however it seems that the event was not in conjunction with Adelaide Victory.

Adelaide Victory share the venue with a number of organisations and are not responsible for the hiring out of the venue. Following consultation with Adelaide Victory, we can confirm that they were not aware of the event and the event was organised by an organisation not affiliated to Football Federation South Australia.

Adelaide Victory will be contacting the entertainment company to remove the image to ensure that their club and logo are not associated further.

On behalf of FFSA

This defence is unconvincing in the wake of the photo below which appears to indicate this is not the first time... 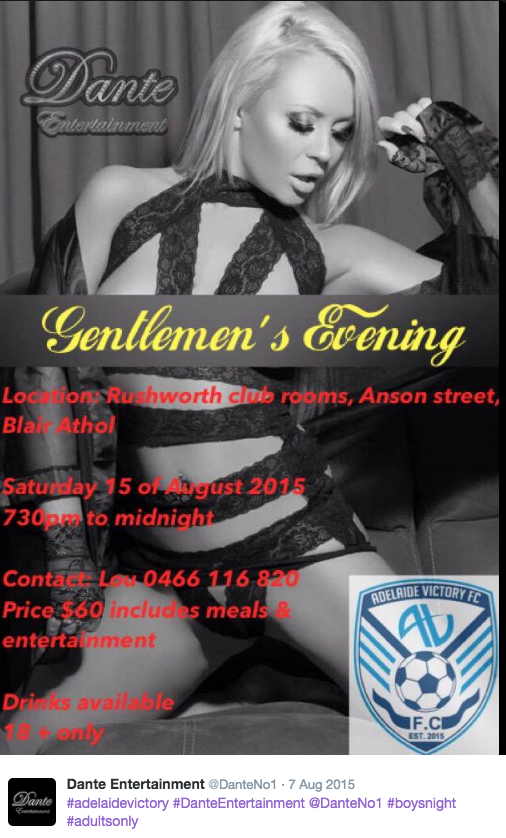 After drawing this second flyer to their attention the FFSA have replied:

On further discussion with Adelaide Victory we can confirm the following:

Should clubs have guidelines on what events occur on their premises?

Let FFSA know what you think.