Sexualised violence isn't OK just because a woman does it: MTR on Rihanna's 'BBHMM' filmed torture

Sexualised Violence isn’t Alright, Just because a Woman is the Perpetrator

BBHMM revels in the eroticization of total power, control and domination over another woman. But we are expected to see it as empowering, because Rihanna and her henchwomen are the agents of this control

A frame from Rihanna’s new video for Bitch Better Have My Money (BBHMM) zooms in on Rihanna’s bikinied bottom. Floating horizontally beside her is Rih’s half-drowned victim.

The singer’s “hot bum” is more significant than the woman floating beneath Rihanna’s lilo. Men are enjoying it. They love her blood soaked “titties” too.

BBHMM revels in the eroticization of total power, control and domination over another woman. But we are expected to see it as empowering, because Rihanna and her henchwomen are the agents of this control. 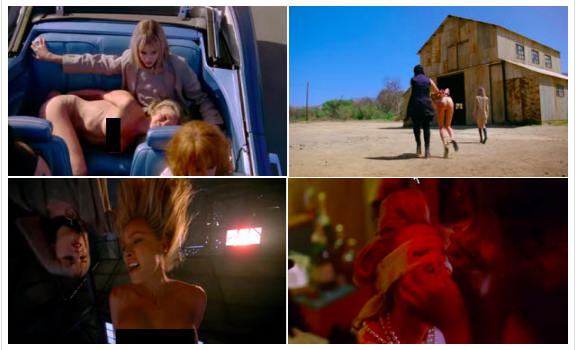 And because Rihanna is black, and because the victim is white and because so many black women have suffered because of white privilege, the rest of us should shut up.

But if we are going to call out other expressions of physical, sexual and emotional brutality men enact on women (Tyler the Creator, Snoop Dog, Eminem, to name a few) and the kind of white girl cruelty led by Lady Gaga (in Telephone), we can’t quarantine the mega star’s video because of her colour.

The clip has been acclaimed as: badass feminism, subversive, sassy, funny, bossy, ballsy, edgy, unapologetic. Call it what you like. What you’re left with is the 7 minute sadistic abuse of a woman for entertainment (garnering more than 16 million views so far).

The story line: Rihanna is mad because her accountant ripped her off (which happened in real life). So Rih and her girlfriends kidnap the accountant’s pearly white, filthy rich, Pomeranian-toting wife and hit the road for some ritualised torture and pornified abuse.

The hostage is stripped, assaulted, hung upside down and swung by a hook in an abandoned barn, plied with drugs and alcohol, made a plaything for a party and knocked unconscious with a bottle to the head when she calls out for help.

When torturing rich-white-lady-who-had-it-coming doesn’t get her money back, greedy dude is quickly dispatched. He keeps his clothes on, there is no drawn out persecution, no sado-suffering at the hands of our rubber suited vixen. His death doesn’t even get that much airtime, really. Five seconds later, Rih is smeared in blood, her naked body adorned with dollar bills in the trunk which once held her victim (who is dead or alive, we’re not sure; there’s more concern over what became of her dog).

To put it bluntly, it is the woman whose humiliation we’re expected to enjoy. A Huffington Post reviewer writes that the line, “Your wife’s in the backseat of my brand new foreign car” was “brought to life” at a live rendition of the song on Saturday Night Live in March, with a “crying, bound and gagged woman utilized as part of the performance”.

Of course, there’s a risk in calling out women’s violence against women. It gives entitled men who don’t like their violence named an excuse to say, “Women are just as bad!” But while the global statistics on violence show it is mostly men who are the perpetrators, we can’t gloss over such brutality when it is women normalising and embedding it in the culture. Though Cosmopolitan – a magazine which has supported campaigns against violence against women – manages to do just that: “She throws her phone into the ocean and shoots it. Plus NSFW nudity!”

BBHMM sends a message that female power comes from inflicting pain on other women while still being sexually appealing to men. Through the bloodied rampage, Rihanna is represented as a badass, cool and confident, while her powerless captive flails. At the BDSM-themed party, we are led to believe the inebriated victim is enjoying her torture. The viewer also learns that this is how black women get power: by punishing white women who are portrayed as a privileged pampered bitches.

It has been posited that Rihanna is a grand philosopher making some elaborate comment on race, or gender or class, and that the video represents some kind of proletarian uprising of poor black women. (The fact Rihanna is a brand seems to be forgotten). “I see a black woman putting her own well-being above the well-being of a white woman,” writes Mia McKenzie. Poor black women have to put themselves first if they are to pay the rent and such like.

There is no denying the hardship faced by black women in cultures where they suffer the double indignities of race and being female. But Rihanna’s character is hardly symbolic of oppressed black women. Her victim, remember, is in the back of a new car p a car our heroine sets on fire a short time later because, well, there’s plenty more where that came from. She can afford to hurl her phone into the sea and can lay out wads of cash for Louis Vuitton chests (perfect for storing hostages in). And how many black women – indeed, any women – can afford Rihanna’s wardrobe? (her BBHMM outfits are listed in the “definitive ranking” on one fashion site: “Kidnapping, nudity, murder: the video of the year is here, and it’s got the style to prove it”).

How many black women have the kind of power and fame Rihanna possesses – and why is that power being used to promote sexual torture of women? And how does her personal power help other women who are oppressed by race, gender and class? One woman’s popularity does not equal the freedom of many.

Can’t we start from the basis that no woman deserve to be hurt? It is problematic that, as a survivor of violence herself, Rhianna would make a video sending cultural signifiers which imply that violence is a way of solving problems. In so doing, she has contributed to a hostile environment for women everywhere.

Further, she has perpetuated harmful cultural stereotypes about “crazy black women who might kill you.” These stereotypes cause terrible harm to real black women.

Rihanna has 81 million Facebook, 42 million Twitter and 16 million Instagram followers. Many will be young women, and many of those young black women. They observe a script loaded with eroticised violence, themes inspired by the sex industry and pimp culture, lyrics celebrating the debasement of women. For many young women imprisoned in America’s juvenile justice system, violence was not a pathway to empowerment and success. The enculturation of violence as a normalised pattern of behaviour has been identified as a key factor in their criminal behaviour.

Girls looking to Rihanna as an icon of success, wealth and power deserve better than brutal, pornified snuff which plays into harmful cultural, racist and misogynist stereotypes in which all women lose.

Melinda Tankard Reist is a writer, speaker and co-founder of Collective Shout.