Should we "destigmatise" paedophilia?

“The compulsion to abuse children is not a morally neutral one, and it should be stigmatised – ie attract social disapproval” – Professor Michael Salter

In recent years, there has been a concerted effort by paedophiles and some researchers to destigmatise, or normalise, paedophilia – even as a legitimate sexual orientation.

Research demonstrates that not all child sexual abuse is perpetrated by medically-designated paedophiles (men who are exclusively sexually attracted to children). Child sexual abuse can also be perpetrated by individuals who are not primarily sexually attracted to children and who may also have a sexual interest in, or offend against, adults. Some child sex offenders may act out of opportunity rather than sexual attraction to children. Read more. 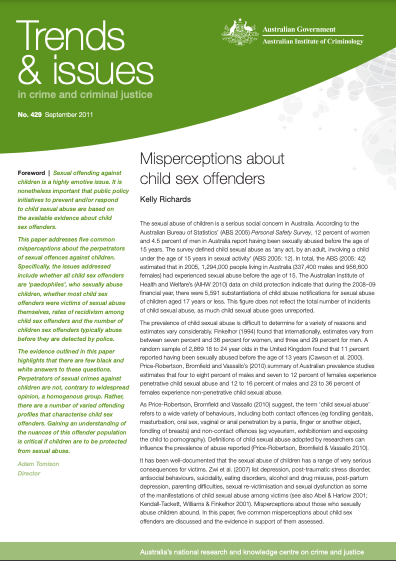 Some researchers therefore argue that in order for non-offending paedophiles to be able to seek help and treatment, paedophilia should be “destigmatised”, and refer to paedophiles as “Minor Attracted Persons” or MAPs, which they believe is a less stigmatising term. A number of these academics dismiss objections to paedophilia, as well as child sex abuse dolls, as being "rooted in societal discomfort and disgust":

University of Oslo researchers Ole Martin Moen and Aksel Braanen Sterri warn that when dealing with paedophilia, “our aim should not be to find outlets for our disgust and outrage.” According to Craig Harper, a psychological scientist at Nottingham Trent University, criminalising child sex abuse doll ownership is “literally creating an offence without a victim for reasons of moral disgust.” The gendered nature of the dolls, designed to resemble female children for the sexual enjoyment of adult men, is ignored by these academics.

Others claim that societal discomfort could stand in the way of important further research.

Michael Seto, director of Forensic Rehabilitation Research at the Royal Ottawa Health Care Group, has said that he hopes “that people can get past their emotional reactions to the idea of child sex dolls or fictional child pornography, in the hope that we might find an option that helps people with paedophilia and makes children safer.” James Cantor, a Canadian psychologist and neuroscientist, similarly believes that prohibiting the use of child sex abuse dolls and robots, which amounts to “blocking the harmless ways of masturbating,” may leave sex offenders more desperate and likely to offend. “Of course, some people will feel uncomfortable with this kind of research,” he continues. “But they should feel even more uncomfortable for as long as we remain without it.” Read more at ABC Religion and Ethics.

While it is important for individuals who are sexually attracted to children to have access to treatment to prevent them possibly sexually abusing a child, normalising or legitimising the desire to sexually abuse children is not in the interest of children.

Associate Professor of Criminology Michael Salter responded to the argument that paedophilia should be destigmatised:

There's a certain variety of progressive who believes that "disgust" is an irrational, unenlightened emotion that we should always seek to transcend.

Why? Why should we suppress our disgust at people who feel compelled to sexually harm children?

I support early intervention services for paedophiles so they can manage their feelings and control their behaviour. I don't hate them as individuals.

But the compulsion to abuse children is not a morally neutral one, and it should be stigmatised - ie attract social disapproval.

Nobody ever argues "oh, there's too much anti-domestic violence stigma, we need to normalise the urge to batter your partner".

We can offer early intervention services for violent men without "destigmatising" controlling and aggressive urges.

As campaigns manager Caitlin Roper wrote in a piece published on ABC Religion and Ethics:

The eroticisation of girls in mainstream culture erodes the social norm that minor girls should be off limits for men’s sexual use. Further normalising men’s sexual desires for prepubescent girls puts them at even greater risk of harm.