[Update] Win! Jeff Allen left the country and his visa was revoked

The ABC understands that Mr Allen, an employee of the US-based Real Social Dynamics (RSD), left of his own accord on Sunday and his visa was subsequently revoked. Read more.

Days earlier a Hotel Chain cancelled RSD events after learning the 'pick-up artist' seminars had been booked under a different name. Read more about that here.

Julien Blanc was deported. Why are his mates allowed in?

Remember the time in 2014 we combined to get U.S ‘pick-up’ artist Julien Blanc booted out of Australia for promoting violence against women? We’d succeeded in persuading venues who had booked him to cancel. He then sneakily tried to hold his nasty little seminar on a boat off the St Kilda pier in Melbourne. My mate Kirsty Mac found out about it and activists swarmed down to the pier and prevented the boat from leaving, even holding onto the boats ropes and blocking its departure. I described the action:

Last night a bunch of would be Julien Blanc clones – unable to find a venue on land which would host them – went all-aboard the SS Sexual Assault, RSD pimps having fooled the Melbourne cruise company into thinking this was something other than a ‘My Dick Rules’ training session. But their floating boot camp, run by Max the Menace (Julien Blanc apparently in hiding somewhere – certainly not the Bayview Hotel which had thrown him out after this warning went around ) was ’sunk’ by protesters. It was a great night to be an on-line activist. I barely left my desk, glued to the live streaming twitter action led by those at the protest...

That same night, following our appeal to the then Immigration Minister Scott Morrison pointing out how Blanc was in breach of visa requirements because of his behavior, and the double-standards in having a National Plan of Action to Address Violence Against Women at the same time as handing our visas to men who profit from it, Blanc was kicked out. Other countries followed suit, denying him entry. It was one of the craziest, most adrenalin-fueled campaigns we’d ever been part of and remains one of our all-time favourites. It was a victory for women everywhere (and for men who care about them). View Collective Shout storify here. 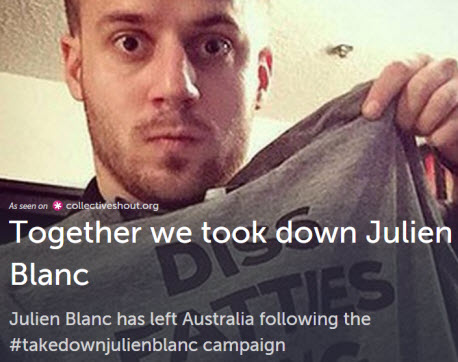 Jeff Allen making fun of disability to score women. ‘Can you make him stop rubbing his boner on me?’

But we’ve just learned that somehow, another big name Real Social Dynamics (RSD) ínstructer' Jeff Allen (Jeffy) has been allowed into the country to take up where Blanc left off. If you want to truly understand the quality of this man, take a look at this video published as part of a piece on my blog by Dr. Matthew Berryman on the tactics of RSD artists.

You can also see him driving his ‘rape van’ and singing his ‘rape van’ song here. See also: ‘Prominent Pick-Up Artist Drives a ‘Rape Van’ and Harasses Women on OKCupid’, Jezebel. Yes, this is the man teaching our men and boys how to treat women and girls, right at this very moment. It’s needs to be remembered that Allen is not acting alone. He is representing his movement – RSD. And RSD promotes rape culture. (Click image to enlarge)

“They dream about this. They wanna be tied up and fully succumb to your aggressive masculinity. They want you to push them against the wall, rip their clothes off, put her in a submissive position and call her bitch, slut, whore until their skull can’t take it anymore…” “See as much as women wanna be raped, they also want to be made feel beautiful.”

And here’s RSD boss Owen Cook on how forcing yourself on women is such a hoot (this video is not on You Tube anymore but you can see it here). 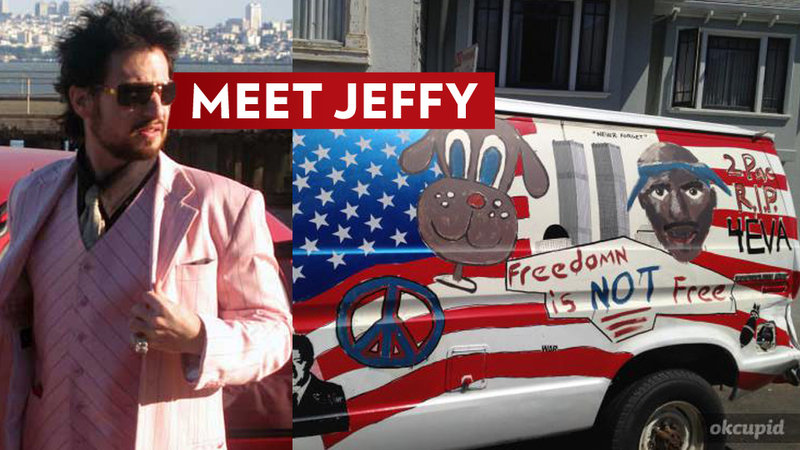 The 'tactics' Julien and his team teach include 'choking' women and calling them 'deadbeat whores' in order to shock them into submitting to his dominance. Now Julien Blanc's associate, RSD instructor Jeff (Jeffy) Allen has been granted a visa and is back in Australia to teach men this disgusting, vile violence against women.   They call themselves "pick up artists", but are nothing more than promoters of sexism and violence against women.   Julien Blanc tried to preach these tactics at ticketed events around Australia in 2014. Fortunately you all stood up and said "hell no" – Australia very loudly said no to violence against women. Then Immigration Minister Scott Morrison revoked Blanc’s visa. This was great news!   But now Julien Blanc's bro Jeff Allen from "Pimp by RSD" is back – running events which promote and profit from violence. He’s touring Australia right now teaching young Aussie men to choke women and treat them like garbage to assert dominance over women and essentially psychologically abuse women until they submit to these men.

Update:  There has been some confusion about which RDS instructor was in the country. This Instagram pic taken by a young man by the name of Josh shows Jeff Allen addressing a group of men at a Sydney hotel at the opening event in Sydney last Thursday.

(How depressing to see so many men absorbing RSD’s message of disrespect, manipulation and exploitation of women). 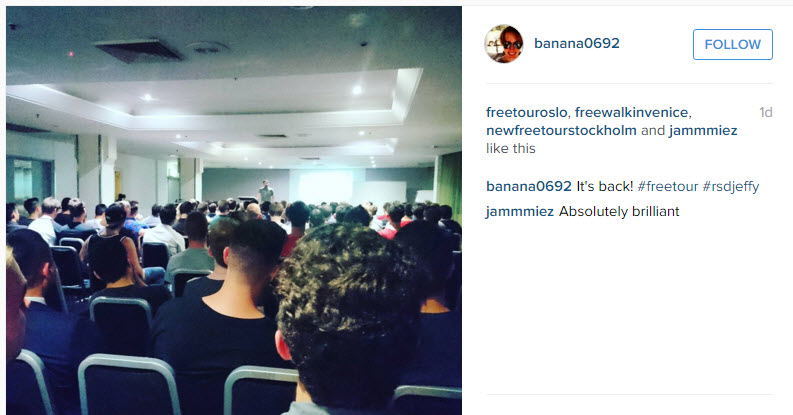