From Women, Action and the Media:

"..."In a statement released today, Facebook addressed our concerns and committed to evaluating and updating its policies, guidelines and practices relating to hate speech, improving training for its content moderators and increasing accountability for creators of misogynist content." Read more about Facebook's commitment here.

Read the open letter to Facebook and join the campaign 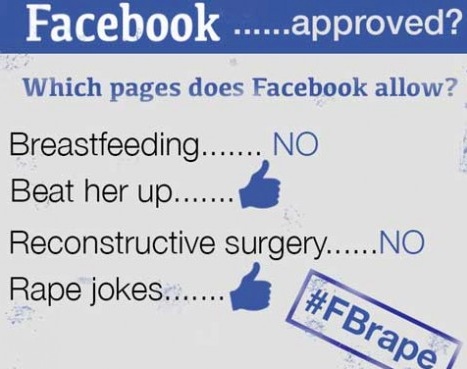 A global campaign is calling on Facebook to clamp down on content glorifying rape, domestic violence and other forms of violence against women.

The joint campaign was started by the Everyday Sexism Project, Women, Action and the Media (WAM!) and activist Soraya Chemaly.

Collective Shout has signed an open letter to Facebook along with women's advocates and organisations around the world. We invite you to join the campaign calling on companies to withdraw advertising until Facebook takes action to remove content glorifying violence against women.

Here's an excerpt of the letter:

We, the undersigned, are writing to demand swift, comprehensive and effective action addressing the representation of rape and domestic violence on Facebook. Specifically, we call on you, Facebook, to take three actions:
To this end, we are calling on Facebook users to contact advertisers whose ads on Facebook appear next to content that targets women for violence, to ask these companies to withdraw from advertising on Facebook until you take the above actions to ban gender-based hate speech on your site. (We will be raising awareness and contacting advertisers on Twitter using the hashtag #FBrape.)

The campaign has already had significant success, with a number of companies agreeing to pull their ads. Join the campaign today. Your voice makes a difference.