But the parenting guru and father of two kept hearing sad stories of friend’s daughters and coming into contact with parents in despair about how unhappy their girls were. They were plagued by eating disorders, self-harm, and depression.

“When I was writing on boys, girls were doing fine,” says Biddulph. “Then about five years ago that started to change. We began noticing a sudden and marked plunge in girls’ mental health.

“The average girl, every girl, was stressed and depressed in a way we hadn’t seen before. Nearly one in five has a serious mental health issue during her growing up years. You can’t ignore that”. 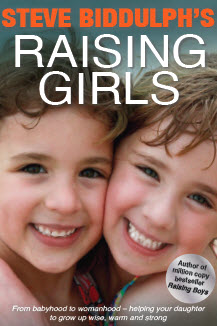 So he didn’t, writing a guidebook - Raising Girls: From babyhood to womanhood – helping your daughter to grow up wise, warm and strong (Finch Publishing) - which shot to no.2 on UK Amazon’s charts this week (until it was knocked off by a diet book recommended by Posh Spice).

Biddulph argues that girls have to be proactively launched into healthy womanhood.

“We haven’t loved girls well enough, understood them deeply enough, or stood alongside them to face the hyenas of this world that wanted to tear them down,” he says.

Biddulph gives parents a map for how to build strength and connectedness through the five stages of girlhood: being secure, learning to explore, relating to other people, finding your soul, and taking charge of your life.

What surprised him most in the writing of the book, he tells me, was the way the world comes at them.

“It reminds me of those images of the tsunami, all that junk surging into the streets and houses. That’s what our media is like now - flooding junk into children’s heads - that your looks are all that matter, that sex is just something you trade, that you can’t be loved for yourself,” he says.

“Girls are affected by that. Everyone has heard their daughter saying ‘I hate my body, ‘I hate my life’.

Biddulph says girls have lost four years of childhood peace and development, forced out of childhood before they’ve completed or fully enjoyed it.

“Being evaluated in terms of how you look, how you please others, how you are seen as a ‘product’ has taken girls back fifty years,” Biddulph says.

“Girls are in enormous pain and confusion. They are filling up the mental health clinics, the police stations and emergency rooms, the alcohol and drug treatment programs in numbers never seen before.

“Girlhood dramas should be dramas of learning and growing, not being battered and damaged”.

I ask him what he thinks is the best thing parents can do to help raise strong, resilient daughters (I have a vested interest in the answer, with three daughters of my own).

“Once you have a clear idea of the stages, it’s all about giving it the time, he says.

“Hurry is the enemy of love, because we start to not connect and our kids feel unimportant. That feeling is very common. We need to recognise parenthood is another full time activity.

“Not just to manage our children, but to actually talk them through their life’s struggles, and actively teach and encourage them. If your daughter is close to you, she will know how to be close to others.”

Girls need to be nourished physically, spiritually and emotionally, to help build resilience and be able to navigate their way through a tough world.

Biddulph says: “A girl who knows her own soul may be a gentle girl but with an iron in her that is not easily manipulated by careless boys or false friends. She will be loyal, tough, and protective of those around her. And of herself.”

“It’s time to stop the trashing of girlhood, equip parents to deal with the modern world and get the media off the backs of our daughters.”

Despite the extent of the problem, Biddulph remains a man of hope. He is encouraged by the growing worldwide movement to free our girls.

“There’s a great movement rising up all over the world to improve things for girls. People everywhere are waking up to the exploitation of our girls and taking action to address it.” 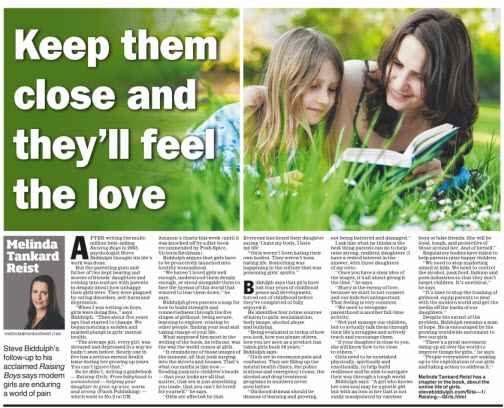