The UK Home Office has released a report following its open consultation on Violence Against Women and Girls (VAWG) strategy 2021-2024. The report highlighted 'widepsread consensus about the harmful role violent pornography can play in violence against women and girls', with most respondents agreeing that an increase in violent pornography has led to more people being asked to agree to violent sex acts and to more people being sexually assaulted.

Existing evidence examining the relationship between pornography and attitudes supporting violence against women and girls suggests for some individuals there may be a link between watching - in particular violent - pornography and aggressive attitudes or behaviours towards women. Evidence also suggests that young people who watch pornography are more likely to have unrealistic attitudes about sex and to hold less progressive gender roles (e.g. male dominance and female submission) with research drawing links between violent attitudes and exposure to violent media and pornography.

The report outlined the UK Online Safety Bill and proposed measures 'to prevent children from accessing content which poses the highest risk of harm to them' - including online pornography:

We expect companies to use measures that provide them with the highest confidence in the age of a user, for example, age verification. If companies do not use age verification technology, they will be required to demonstrate that their alternative approach delivers the same level of protection for children.

Highlighting women's lack of confidence in the justice system, respondents referred to 'very low rape prosecution rates' which they perceive as ‘decriminalisation’ of these offences.

In an effort to address exploitation and harm of women arising from prostitution, the UK Government announced a forthcoming, standalone strategy for Tackling Modern Slavery.

We elaborated on connections between objectification of women and sexualisation of girls in advertising, media and pop culture, and attitudes which tolerate and condone violence against women and girls.

In recognition of links between prostitution and violence against women and girls, we documented the ways in which decriminalisation puts women and girls at greater risk and commended the Nordic (Equality) Model of legislation to end sex buyers' demand and protect women and girls.

Click the image below to read our full submission. 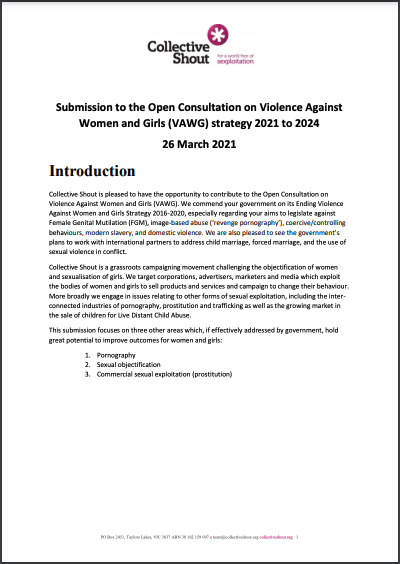 Read our other submissions here.