First, a topless girl advertising ‘jeggings’ on the back of a bus, followed by a highly sexualised television commercial. 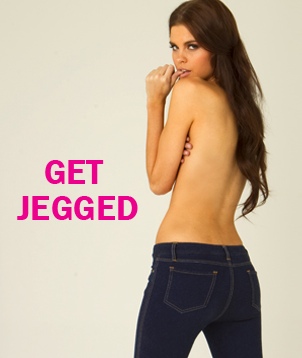 Collective Shout supporter and admin Kate wrote about the jeggings ad on our site here.

Julie Gale of Kids Free 2B kids has written to Supre.

Given that your target market is young to mid teen girls surely it's time that you paid attention to the  research and concerns expressed by leading child psychologists.

The current advertisement on TV might look like a bit of fun to your marketing team  - but it is contributing to the continuing onslaught of harmful messages being sent to young girls.

ie: Their value comes from how 'thin, hot and sexy' they are.

Teenage girls alerted me to the ad shown on afternoon television and they were upset at the what message it was sending them and the younger girls watching.

Teenagers are currently experiencing unprecedented levels of anxiety, body image issue and eating disorders - and to this you are contributing.

The recent ad on trams featuring a topless model wearing jeggings is more of the same.

As were the slogans on your t-shirts last year which read -   'Santa's Bitch', Pussy Power' & 'North Pole Dancer.'

Kids Free 2B Kids urges you to care more about your target audience and treat them with the respect and care they deserve.

Proactive action would be a responsible move.

I await your response.

"I want to do some dirty things to you tonight, I want to fight all through the night, night, night", and "love machine, by myself, climax, hot wax/S&M on the floor/ I like it hard core".

This latest ad campaign is a continuation of Supre’s irresponsible marketing. Clearly the company has learnt nothing from consumer complaints and has ignored the research on the sexualisation of children.

While the Federal Police go to great efforts to educate young people about ‘sexting’ Supre thinks it is ok to use a topless young woman to sell their products to a 'tweenage' market.

You can read the ASB determinations here:

Thank you to all who have made their voices heard on Supre's marketing to young girls. News.com.au have picked up the story and have published this article, Sexy ad campaign targeting children sparks anger. Great to see this acknowledgment from the Advertising Standards Board regarding Supre's target market:

The ABS case report refuted claims by Supre that it had targeted the 18-35 age group.

"The board strongly disagreed and noted that the Supre brand is attractive to and very popular with teenage and pre-teen girls," the report read.

The jeggings campaign has also been blasted by online groups fed up with Supre's "highly sexualised" campaigns.

"Collective Shout supporters have been sending complaints to Supre as these are sexualised ads aimed at a young market," she said. Read the full article here.

Contact Supre and tell them why you won’t shop there and why you’re telling everyone you know that you’re boycotting their store.

Send your complaint to Supre here.

Complaints on transport and posters have been upheld. See determinations above. Thank you to all who spoke out on this issue.