Bought to you by clothing store Supre the $18 red and white t.shirt features the slogan: “Santa’s Bitch”. Ten-year-olds are among the target market. The t.shirts are displayed on mannequins at the front of the store. 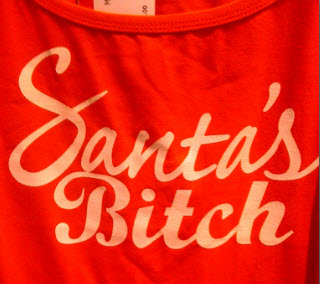 The elves have been shelved and replaced with subservient bitches who just love to be degraded.

Let’s look at common understanding of the word bitch. Among the definitions in urban dictionary we find:

Melissa Farley, a contributor to Getting Real: Challenging the Sexualisation of Girls, was spot on when she wrote:

“Trained by popular western culture, girls learn to present a hypersexualised, prostitute-like version of themselves to the world”.

Danielle, who complained at a Westfield store in Victoria, gave a revealing depiction of the way consumer complaints are treated:

“I spoke to the store manager, who said she couldn’t remove them from sale…I spoke with the Centre Management of Westfield Geelong, who said all complaints about a store and their products are taken seriously, filed and referred to when looking to renew the lease of the retailer”

“Taken seriously and filed”. That would make a great book title. Then dusted off sometime down the track when the lease comes up for renewal – what, in a year? Two years? If that’s serious, how do management respond when they don’t care?