Most Australians wouldn’t consider the links between sexism, objectification of women and sex trafficking in sport, or even think about it at all.

Posted on Calling on Media to #Askhermore at AFL Brownlow Medal by Collective Shout · September 27, 2014 1:29 AM

On 22nd September 2014 we called on the media to #AskHerMore at the Brownlow Medal, an annual event honouring the sporting achievements of AFL Players.

The Brownlow red carpet highlights a larger trend in the media, where women can be regarded as purely decorative. Wives and Girlfriends of players (identified collectively as WAGS) are observed, analysed and celebrated primarily for their physical attractiveness.

In the majority of red carpet interviews, reporters focus on women’s choice of attire, with gossip columns praising women who live up to specific standards of fashion and criticizing those who they deem to fall short. Players and partners have spoken out against this trend.

Here are some highlights from the campaign. Thanks to all who joined us to #AskHerMore ! 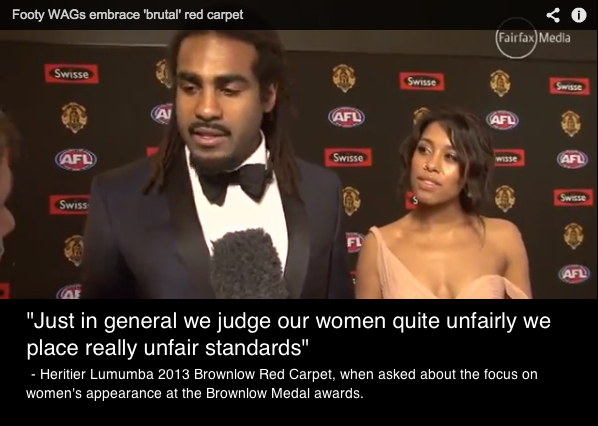 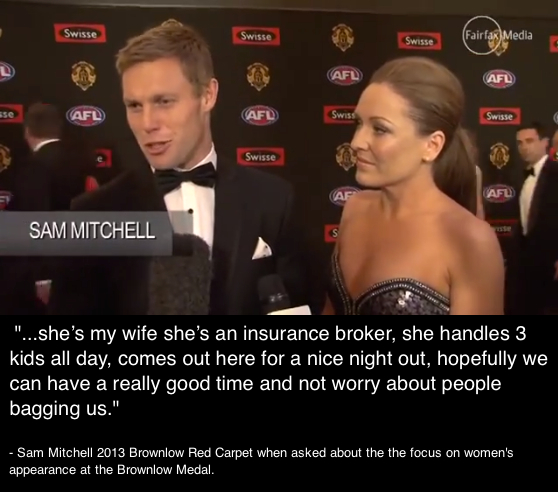 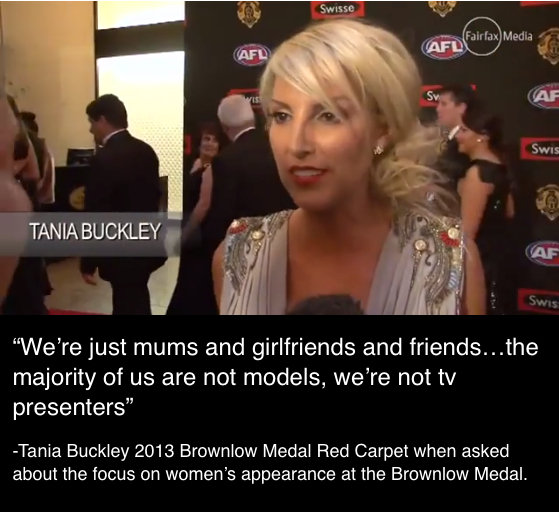 Posted on Calling on Media to #Askhermore at AFL Brownlow Medal by Collective Shout · September 22, 2014 6:05 PM

Shaun Burgoyne's wife Amy admitted that all the wives and girlfriends find the event "stressful" because they are expected to look like supermodels when they're actually "just normal, regular girls".

"(It) did nothing but further objectify the WAGs and undo any good work that has been achieved to clean up the sexist pressures (they) have faced."

"If the stupid 'Fashion Police' are going to be at next year's Brownlow NO WAY will I be attending," she (Haylea Cooney) tweeted last week.

She said players' partners felt a lot of pressure in the lead-up to the event because of the focus on the red carpet.

"The (critics) can be pretty tough," she said before the event. "We are not models. I am a mum ... I have never done any modelling," the mother-of-three said.

Several high-profile AFL players took to Twitter to defend the WAGs. "No females will ever want to go to the Brownlow after hearing what these blowers have to say about them," tweeted Collingwood's Travis Cloke during the telecast.

The AFL is great at tackling racism. But what about sexism?

"Sometimes, embedded sexism is more subtle. Take the annual Brownlow Award night coverage. Every year, red carpet commentators state how Brownlow night is “the ladies' chance to shine”. If this were true, then wouldn't we instead be watching televised coverage of the awards night for the Victorian Women's Football League? What the commentators really mean here is that the women accompanying the players; or “WAGs” as they are disrespectfully referred to; will be admired for their choice in garments and will be invited to parade said garments by posing or, occasionally, by standing on a turntable. The next day, they will have their appearance graded out of 10 by the tabloids. To the AFL, the commercial stations, the tabloid newspapers and the general public who lap up, it is clear that women “shining” equates to women looking good. The individual accomplishments of these women is irrelevant."

Posted on Calling on Media to #Askhermore at AFL Brownlow Medal by Collective Shout · September 22, 2014 5:53 PM 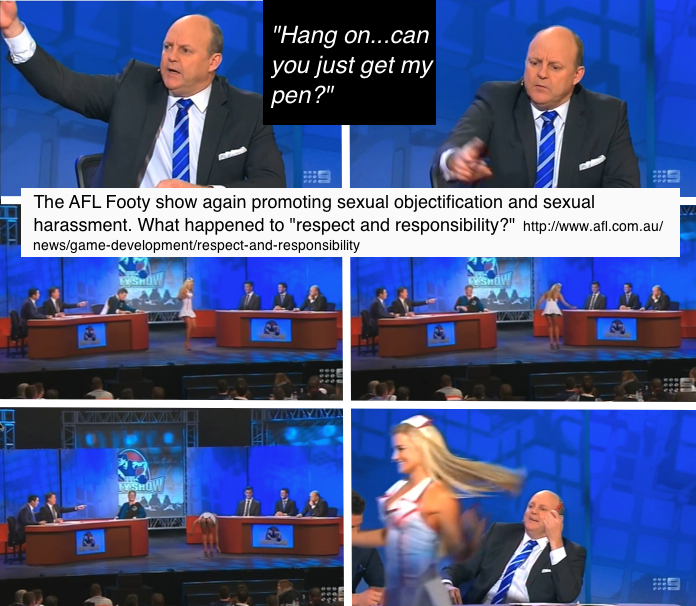 Calling on Media to #Askhermore at AFL Brownlow Medal

The annual Brownlow Medal award ceremony will be held tonight to celebrate the sporting accomplishments of AFL players.

The festive season is here. You only need to look at the latest shopping centre catalogues, online stores and even your facebook news feed to see that companies are working hard to compete for your Xmas dollar.

But lets not forget which of these companies have used sexploitation to flog their products in 2013! Before you buy gifts for friends and family, check our list. Vote with your dollar and boycott companies that have sexualised children and objectified women for profit in 2013.

Three years of silence from the AFL

Nena and Pasadena encouraged jokes about raping women with their reply, ‘Keep em coming guys - this is very entertaining!

The Australian Football League proudly partners with the White Ribbon Campaign to stop violence against women.

The AFL (Australian Football League) is committed to tackling the issues of violence against women. Their support of White Ribbon has been long standing with many AFL managers and players participating in White Ribbon's Ambassador Program, and their commitment to driving change is also reflected through their respect and responsibility programs.

"Their commitment to driving change is reflected through their respect and responsibility programs."

You're about to be bombarded. Bombarded with junk mail, TV, radio and outdoor advertising all competing for your Christmas dollar. Before you purchase gifts for your friends and loved ones, lets remember those brands that have excelled in sexploitation this year, the brands and companies that do not deserve your hard earned money. Cross 'em off your Xmas list!