"See what you made me do": author Jess Hill's mission to understand abusive men

This week a supporter contacted us after coming across a disturbing image on Golfporn’s Facebook page. The picture, which showed a woman being kicked off a cliff after suggesting her male partner sell his golf clubs, “did not violate community standards”, according to Facebook. It had been shared over 1500 times. 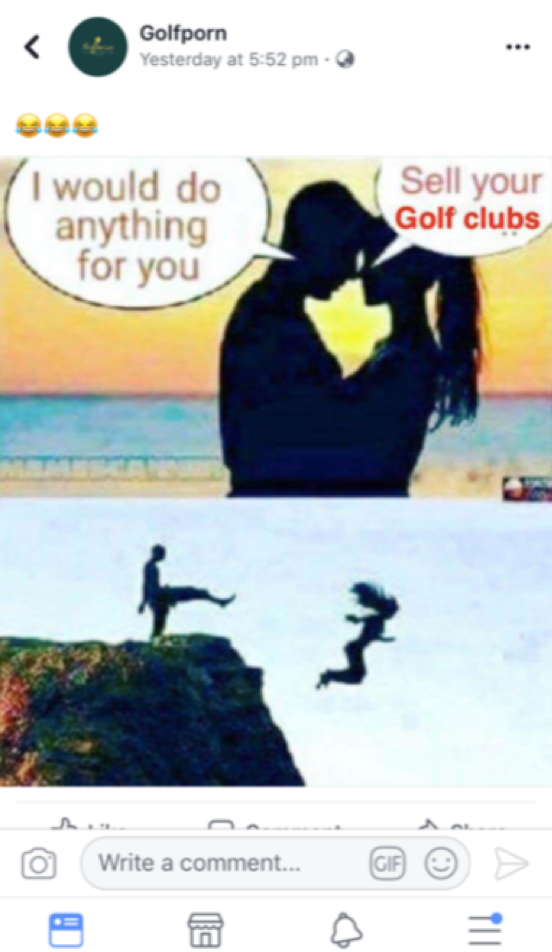 It is an unsettling image for many who understand the shocking reality of domestic violence and murders of women.

Not a joke, but a reality

This isn’t an absurd abstract scenario - it is a real-life and often life-ending scenario for many women.

In 2015, Harold Henthorn was sentenced to life in prison after pushing his wife Toni 130 feet off a cliff while hiking in Colorado’s Rocky Mountain National Park to celebrate their anniversary.

Brisbane man Daniel Brookes was arrested in 2015 having been accused of killing his girlfriend Maria Elena Huilcanina Ocampo by throwing her off a balcony. The couple were heard having an argument before security footage showed her body fall. Her sister said that Maria had blood under her nails when she fell.

Simon Gittany was found guilty of murdering his fiancée Lisa Harnum by throwing her off the balcony of a Sydney high rise apartment block.

At trial, witness Joshua Rathnell recalled hearing “deranged screaming” and looked up to see someone “unloading” something from the building.

”I saw the man load the object off the balcony, and in what I described as a fluid motion, turned and went straight back into the apartment.”

At the time of Gittany’s conviction, Justice McCallum said Ms Harnum must have been "in a state of complete terror in the last moments before her death".

Earlier this year, Alexander Kenneth McIntyre pleaded guilty to assault charges after he held a woman by the neck against a balcony and told her he would drop her to her death and “happily do 16 years” in jail. Holding a knife, he threatened her “I will cut your head off, c***.” A crying child was also present.

Last year, Loren Bunner was sentenced to 52 years in prison after murdering his 18-year-old ex-girlfriend Jolee Callan while they were hiking together. He shot her in the back of the head and in between the eyes before shoving her off a 40- foot cliff. Bunner bragged to cell mates about killing Ms Callan, claiming that if he couldn’t have her no one else could.

New South Wales man Des Campbell was found guilty of killing his new wife Janet Campbell by pushing her off a cliff. The prosecution told the court that Ms Campbell was "worth more to her husband dead than alive" because he needed her money to pay off his debts.

Given this awful reality, how can casual joking about pushing one’s wife off a cliff be regarded as humorous? Joking about violence against women is sinister in its apathy and callous attitude to women whose lives ended this way.

Dr Kristin Diemer, one of the lead researchers and authors on the National Community Attitudes Survey on Violence Against Women, noted that excusing the abuse of women as a joke “minimises the impact of violence against women”.

“Few Australians openly support violence against women, but many others subtly endorse it by trivialising and excusing acts of abuse.”

Media has an impact on attitudes and behaviours. That a social media post making light of violence against women is so popular and unremarkable both reflects and perpetuates our desensitisation to these horrific crimes.

“Community attitudes on violence against women are an important barometer on gender relations. They illustrate the way people respond when they witness violence, whether victims feel confident to seek help, and whether perpetrators are likely to be excused or held to account for their actions. Changing attitudes is crucial to preventing crises in the longer term. Community attitudes shape the way we respond to domestic violence.”