Give these sexist companies a miss this Christmas!

Each year in the lead up to Christmas we release our annual blacklist of corporate offenders - companies which have objectified women and sexualised girls to sell their products and services during the year. Our supporters use this list as a guide to inform their desire to spend their money ethically.

There is even more evidence now of the harms of these portrayals of women and girls. And far greater awareness of the importance of Corporate Social Responsibility (CSR). Many companies spout their supposed commitment to confronting sexism and promoting women’s empowerment and equality, while at the same time profiting from sexist marketing and products, as we have documented over and over.

You can send a strong message to these companies that you won’t tolerate these double standards, will vote with your wallet and refuse to financially support brands that profit from these demonstrably harmful practices. If they don’t understand ethics, perhaps they will understand when they start losing money.

At number one in our line-up, sex shop Honey Birdette routinely plasters its shopfronts with porn-themed representations of women in so called ‘family friendly’ shopping centres. To date, Ad Standards has investigated 66 Honey Birdette ads, upholding complaints in 38 cases. Honey Birdette refuses to play by the rules and our self-regulatory body has shown itself powerless to do anything about it. At time of writing, 76,000 individuals have signed a petition calling on the company to change their ways. Honey Birdette employees also describe a toxic workplace culture of sexual harassment and bullying, including being expected to use their sexuality to secure sales and pressured to tolerate sexual harassment and intimidation from male customers.

These major shopping centres continue to host Honey Birdette’s porn-themed advertising, facilitating the display of sexist and sexually objectifying content to an all-age audience. It might be challenging to avoid all these shopping centres, but we encourage supporters to do all they can to obtain gifts elsewhere and boycott children’s activities including pics with Santa which, as we’ve documented, are often held in close proximity to Honey Birdette. Click here to see the full list of shopping centres.

Australian make-up and skincare brand Frank Body routinely sexually objectifies women in their advertising, using sleazy double entendres and innuendo from their male persona ‘Frank’ about getting naked and dirty. The company dismissed concerns from a group of Melbourne teenage girls who objected to their sexist ‘Send Nudes’ lip tint, normalising and trivialising girls’ experiences of sexual harassment. Give this brand a miss.

We reached out to Mecca CEO Jo Horgan asking the company to withdraw Frank Body ‘Send Nudes’ lip tint, which normalises and legitimises the everyday sexual harassment experienced by teen girls. Our various approaches were all met with silence and Mecca continues to stock and profit from Frank Body products, despite their ongoing sexual objectification of women. Shop elsewhere this Christmas.

While many associate Playboy simply with its branded items or magazine, Playboy Enterprises own various adult TV channels and websites, broadcasting brutal, hardcore pornography. Retailers that stock Playboy branded products are helping Playboy to produce and distribute content that objectifies and degrades women. By stocking Playboy branded products Chemist Warehouse is profiting from the mainstreaming, normalising and embedding of a major brand of the sex industry into mainstream culture.

Online marketplace Amazon has a long history of stocking sexually exploitative products and this year the global giant hasn’t been any better. We first called them out in 2010 when they were selling “The Paedophile’s Guide to Love and Pleasure: A child-lover’s code of conduct”. Since then we have exposed Amazon selling pro-rape and pro-paedophilia merchandise, child sex dolls, and this year, rape and incest-themed books. Enough is enough- boycott Amazon this festive season.

General Pants has a long history of using sexual exploitation to sell products, from change rooms plastered with pornographic imagery, live pole dancing displays, and a series of very large sexist shop front ads featuring young women in bikinis alongside slogans such as “Wet dreams” and “Slippery when wet”. Get your pants from a sexism-free shop.

This year we announced a victory in our decade-long campaign against Wicked Campers and their sexist and degrading slogans promoting rape and murder. Finally, state transport ministers signed an agreement to deregister vans carrying slogans like this. But - given they had to be forced to change after years of recalcitrance - you can still send them a message by refusing to rent Wicked Camper vans for any holidays travels.

While we’re on cars, UltraTune has attracted hundreds of complaints over their sexist ads, depicting women as mindless bimbos who can’t operate their vehicles. The company continues to show their contempt for women by hiring high-profile men with histories of rape and physical violence against women to star in their ads, including Mike Tyson and Charlie Sheen. Get your car serviced somewhere else this season.

So where can you shop?

Looking for some positive alternatives? Check out the companies which have signed our Corporate Responsibility Pledge not to objectify women and sexualise girls in their advertising, products and services. Do you know of any others? Let us know in the comments.

Three years ago we reported on the extreme amount of hypersexualised imagery on display at Chadstone Shopping Centre. A popular hangout for teens after school, it was hard to walk from one end of the centre to the other without being exposed to the harmful ads.

A recent visit shows that not much has improved. 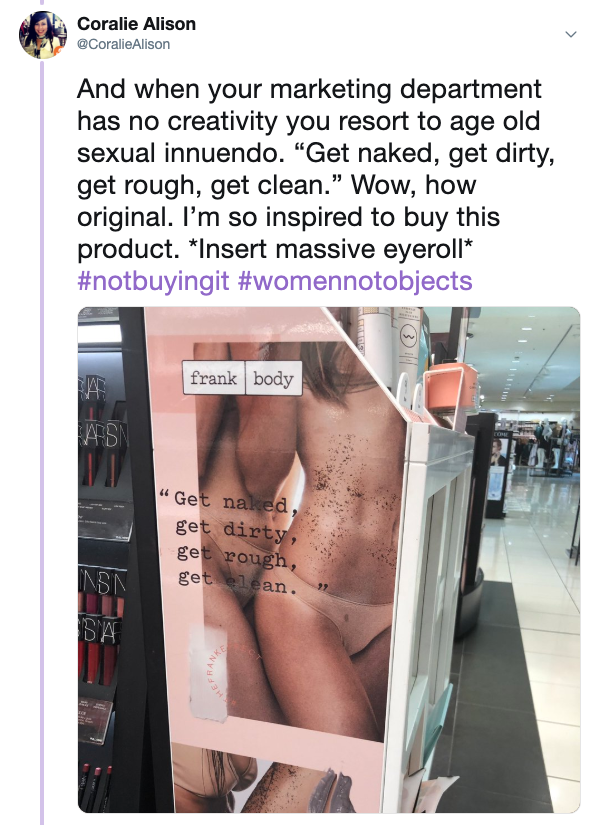 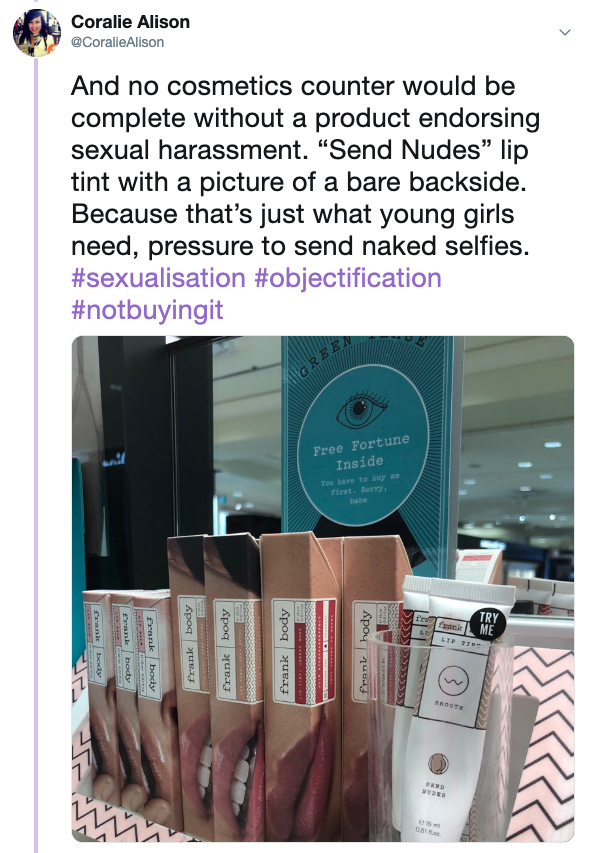 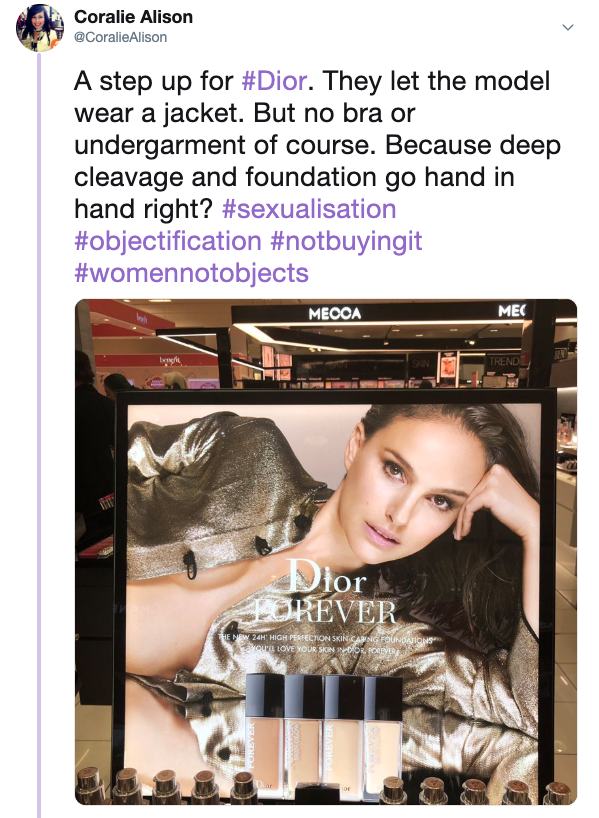 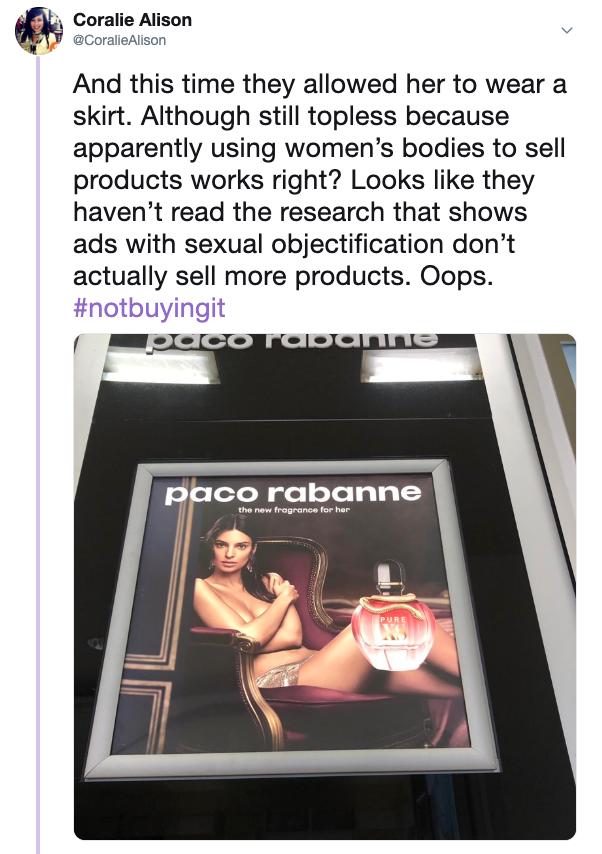 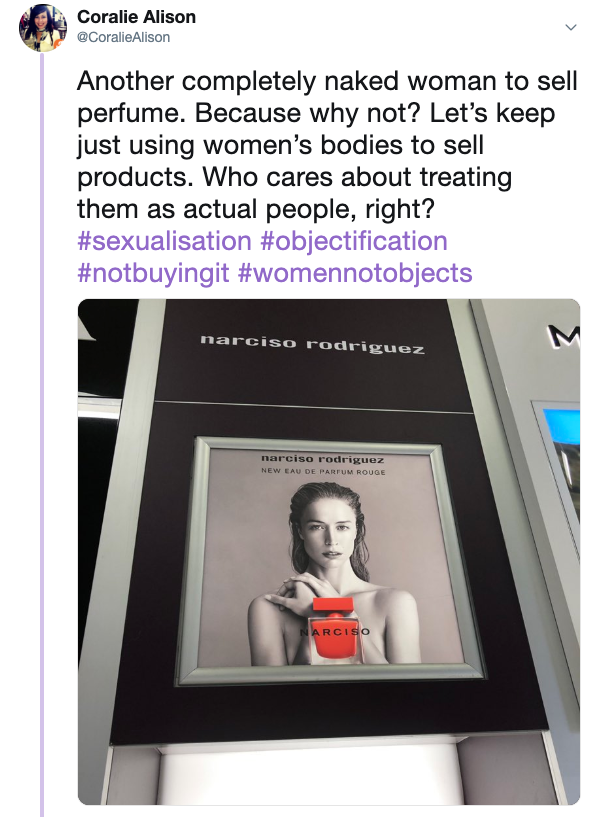 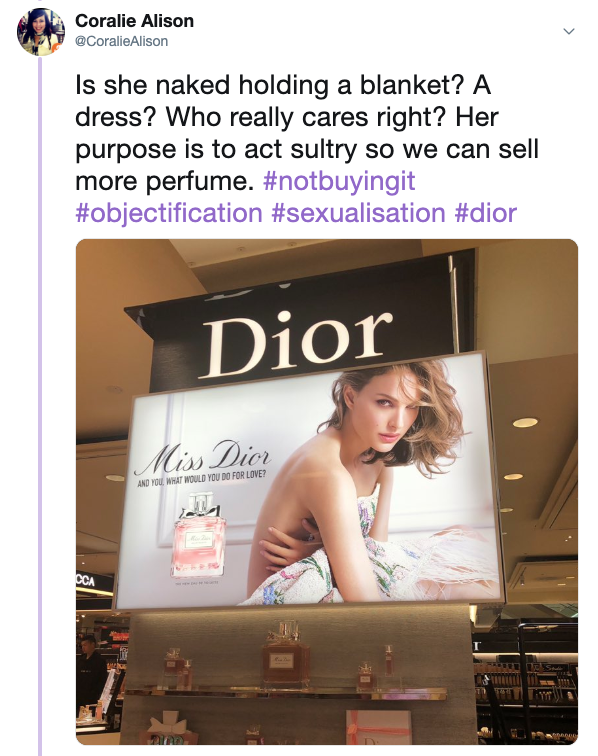 We know from two decades of research that "everyday exposure to this content are directly associated with a range of consequences, including higher levels of body dissatisfaction, greater self-objectification, greater support of sexist beliefs and of adversarial sexual beliefs, and greater tolerance of sexual violence toward women. Moreover, experimental exposure to this content leads both women and men to have a diminished view of women’s competence, morality, and humanity."

Grant Kelley, the CEO and Managing Director of Vicinity Centres, who owns Chadstone Shopping centre, was appointed a Male Champion of Change in 2018. One of their goals is "ending everyday sexism". They even have a whole 18 page document dedicated to it. So what exactly is Mr Kelley doing to ensure that this everyday sexism is stamped out of his shopping centre?

Benefit Cosmetics is a 'featured brand' of department store chain Myer. This is how the brand is currently advertised.

Now is the time to remember the companies who objectified women and sexualized girls to sell products and services. They do not respect women and have refused to change their ways. They should not be allowed to profit on the backs of women and girls. 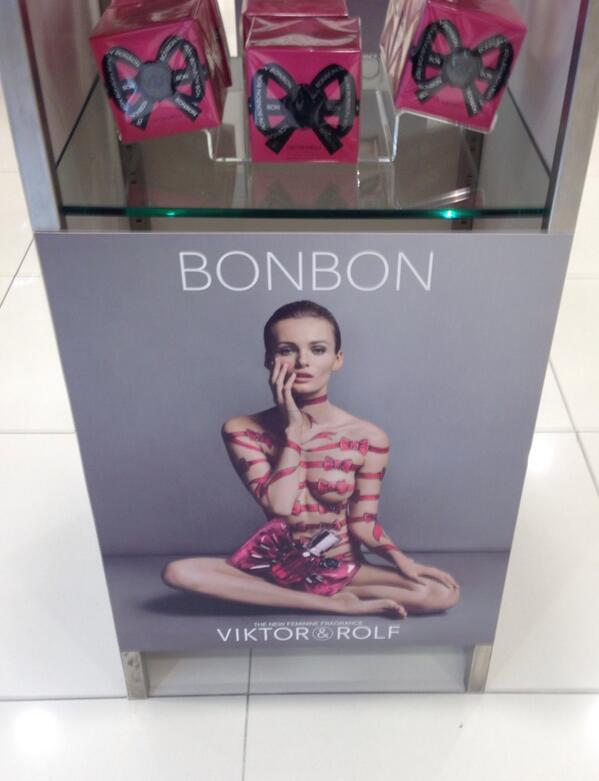 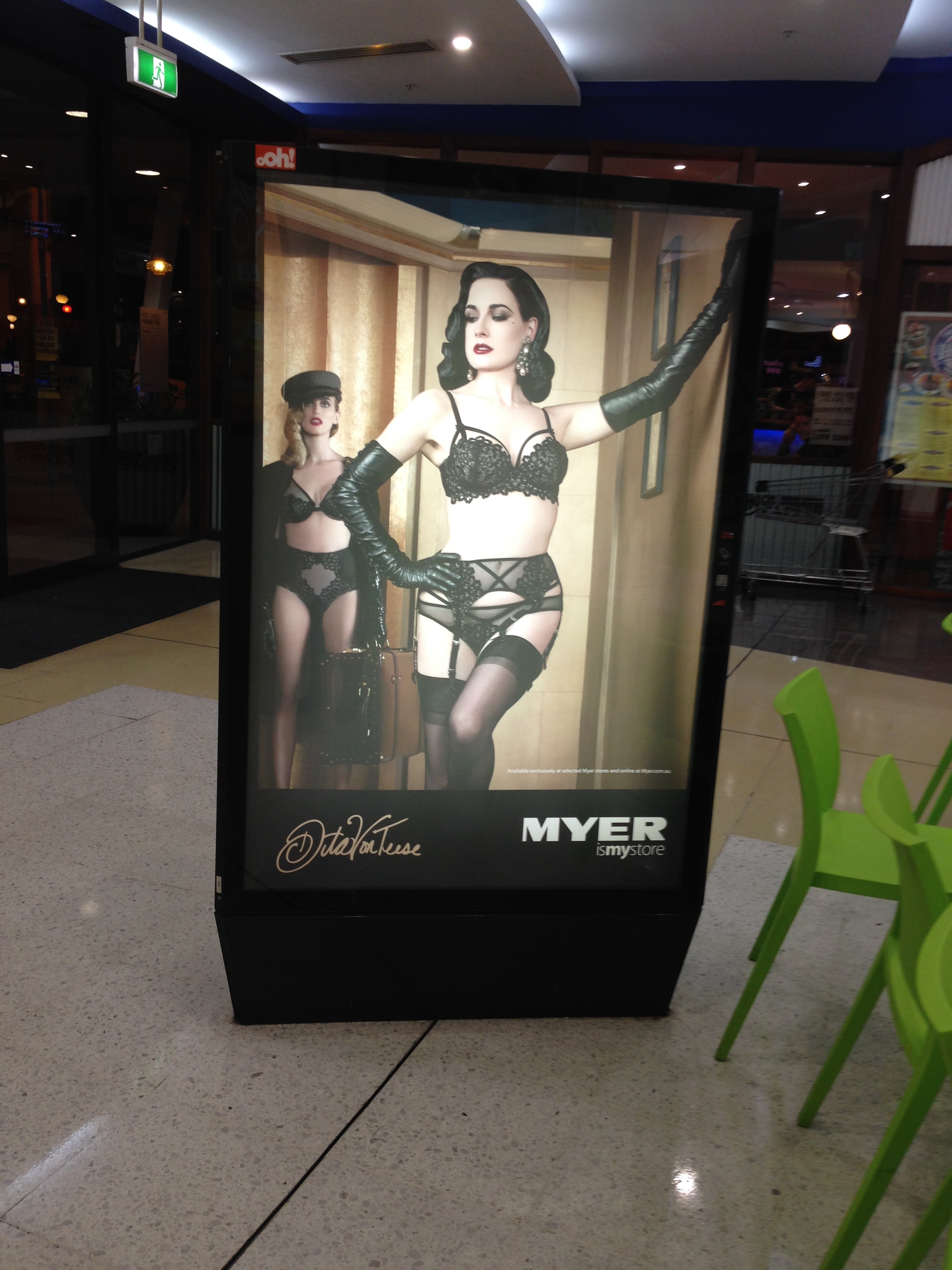