After a decade of Collective Shout campaigning against Wicked Campers sexist and degrading slogans and imagery, we are excited to announce our calls for uniform legislation across the country to deregister offending Wicked vehicles have been heard. Wicked Campers with offensive slogans will be banned from registration in all states and territories under a new plan signed off on at a national meeting of transport ministers.

According to The Advertiser, each state agreed to deregister vans that did not remove offensive slogans following a complaint, and to ensure the van could not be re-registered in another jurisdiction. This national approach would ensure this problem would be solved once and for all.

Katrine Hildyard, Labor’s shadow spokeswoman for the Status of Women said in a statement:

“together with women’s advocacy organisations including Collective Shout and the YWCA, domestic violence services and a range of other groups, we have been campaigning for a long time (for) the Marshall Liberal Government to pass our legislation to rid our roads of Wicked Camper Vans which promote violence against women. They have to date refused to do so.

“Whilst their actions are long overdue, I am glad to hear that Stephan Knoll has finally listened and is beginning to understand how wrong it is to use language which disrespects women and promotes violence against women.”

Thank you for standing with us and speaking out. We couldn't have done it without you!

Why is the sex industry allowed to advertise to my kids?

Yesterday I took two of my children into town for ice cream. This is what they were exposed to on a busy Perth street. 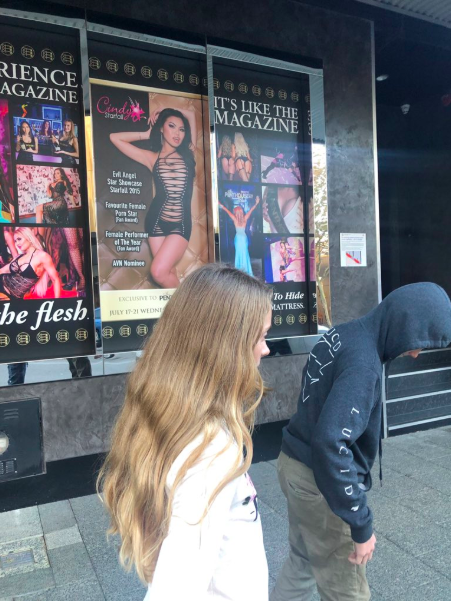 Ad Standards has previously dismissed complaints over this same venue’s ‘Miss Nude’ billboards, on the basis that “based on the location of the building, the audience likely to be frequenting the area are generally customers of the venues and that... this is the relevant audience.” 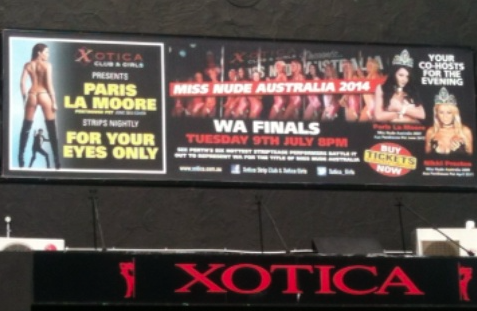 But the “location of the building” is a busy street in Perth- one with restaurants, ice cream stores, a bookstore, library and Time Zone, and the audience is everyone. Why do sex industry interests trump kids rights? If public spaces include adult venues, do they become off limits to children Ad Standards? Are children not welcome in public spaces?

The harms from everyday exposure to sexually objectifying imagery like this are well-established. With twenty years of empirical research, 135 studies found across 109 publications, there is no shortage of research into the negative effects of sexual objectification. Consistent evidence found that:

What is the message being communicated to my daughter about women and girls? What do images like this teach her about how her body should look, where her value lies and who she should aspire to be? What do these images teach my son about what women are for? How does this near constant backdrop of sexist and sexualised images of women’s bodies prepare them for adult life and relationships? This view of women as endlessly sexually available is so normalised and accepted it is routinely broadcast on billboards and shopfront windows and nobody even blinks. How does this perceived acceptance of women as sex objects impact young people’s understanding of women and their place in the world?

This photo of a billboard advertising a strip club was taken from a Brisbane boys school. Ad Standards dismissed complaints, and ruled the strip club ad treated sex, sexuality and nudity with sensitivity to the relevant audience- school children. 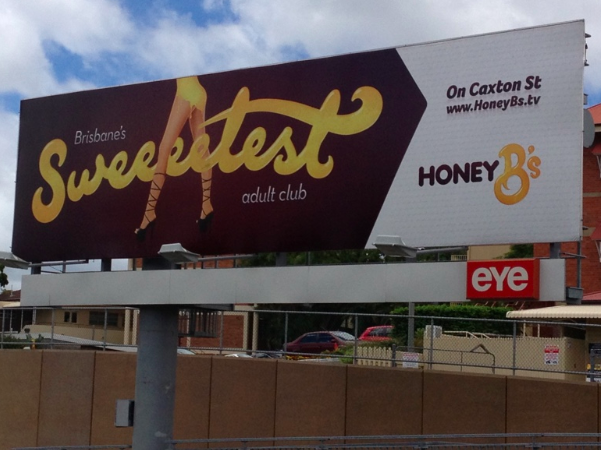 Ad Standards allowed sex industry exhibition Sexpo to advertise on school buses, including one emblazoned with the slogan "The most fun you can have with your clothes on" and others complete with URLs to hardcore live-streaming pornography. 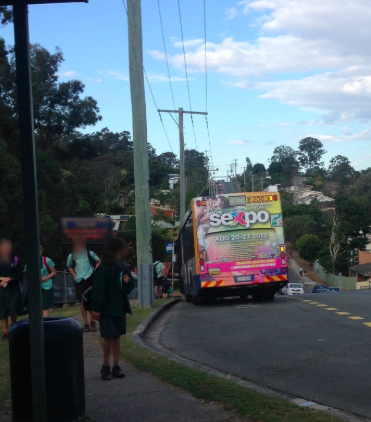 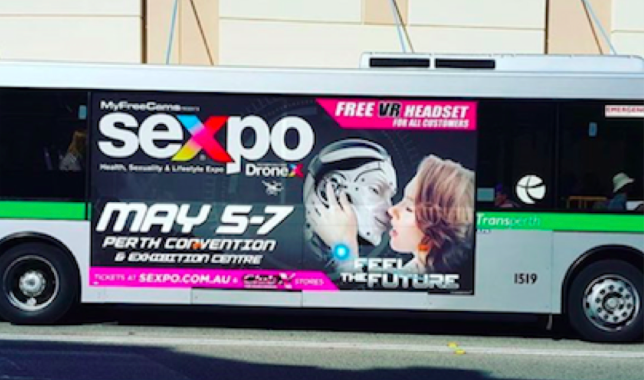 Read about our legal victory against Sexpo here.

A life size poster of this image was located on a busy Adelaide street. Ad Standards ruled this outdoor advertising was not in breach of industry codes and standards because "the image is relevant to the advertised product". The product was women, for men's sexual use. 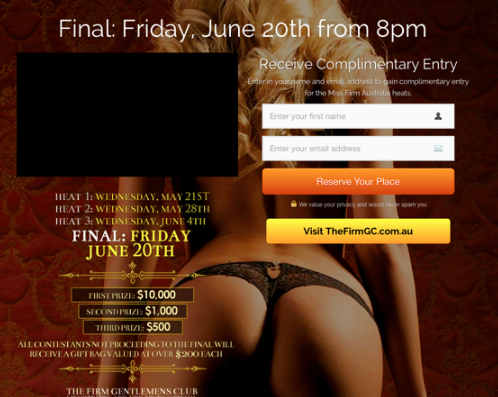 Our current system of ad industry 'regulation' is broken. The harms of sexualising children are well-established, but the commercial interests of advertisers are time and again prioritised above children's rights and wellbeing. The ad industry was put on notice 8 years ago that they had one last chance to turn things around. The industry has proven that it cannot be trusted to regulate itself. It's time for a change. 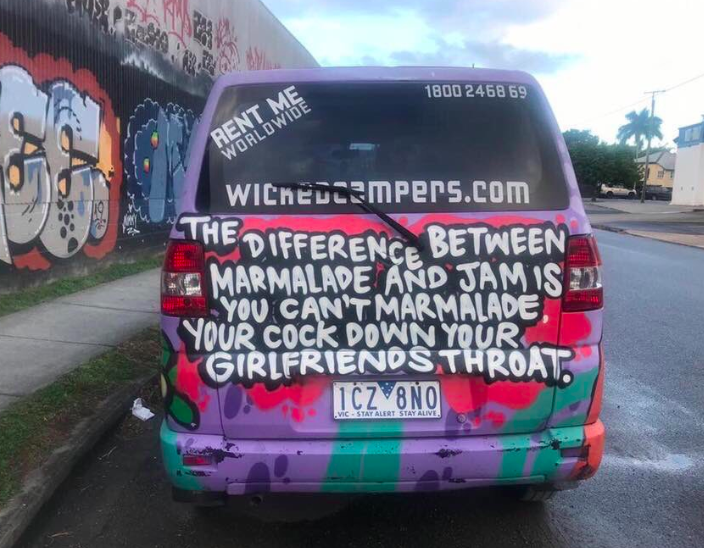 Ad Industry self-regulation means they get away with it

"The advertiser has not provided a response to the Panel's determination"

With no legislation in Western Australia forcing Wicked to comply, expect to see this van again

"This transport advertisement has a WA registration of 1DEA.616 and with text displayed on the boot stating "I'm here for the *bukakke."

*This sexually explicit term refers to a practice seen in hardcore pornography.

With no enforcement laws in place, South Australians can expect to see this van again

Wicked Camper Van with South Australian registration S 388 BSU with the words “if you want to toughen up grow a vagina - those things can really take a pounding” on the rear of the vehicle.

The panel considered that the relevant audience for this advertisement would be broad and include children.

However, the best interests of children were disregarded because the sex trade has a right to promote its business, sexually objectifying and exploiting women.

Win! Sexist ads to be stopped in Berlin!

The Berlin Government has become one of the latest to ban sexist advertising in public places. 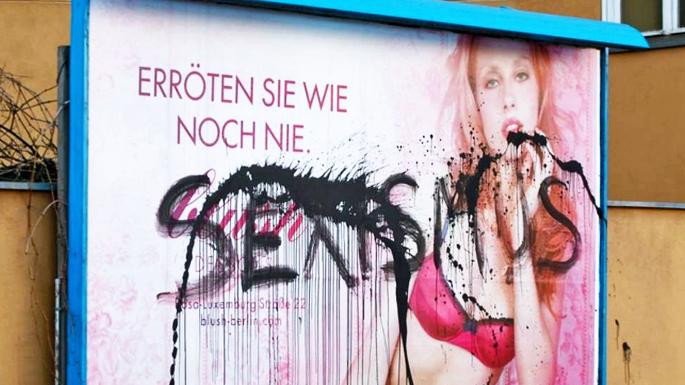