*Content warning: this article describes real events that may be distressing for readers

As a researcher and campaigner advocating for an end to the objectification of women and sexualisation of girls, I follow dozens of underage girls on Instagram. They are aspiring models, gymnasts and dancers. They pose in swimwear and leotards. I watch how they use Instagram to promote a new brand-name bikini, or to exhibit their latest ventures in flexibility: an attempt at oversplits or a contorted backbend. Some of the girls have hundreds of thousands of followers. We - their followers - didn't have to look for them: Instagram’s search , ‘Explore’ and ‘Suggested for you’ features served them to us in an algorithm-procured gallery of pre-pubescents and young teens that caters to the predator’s eye. 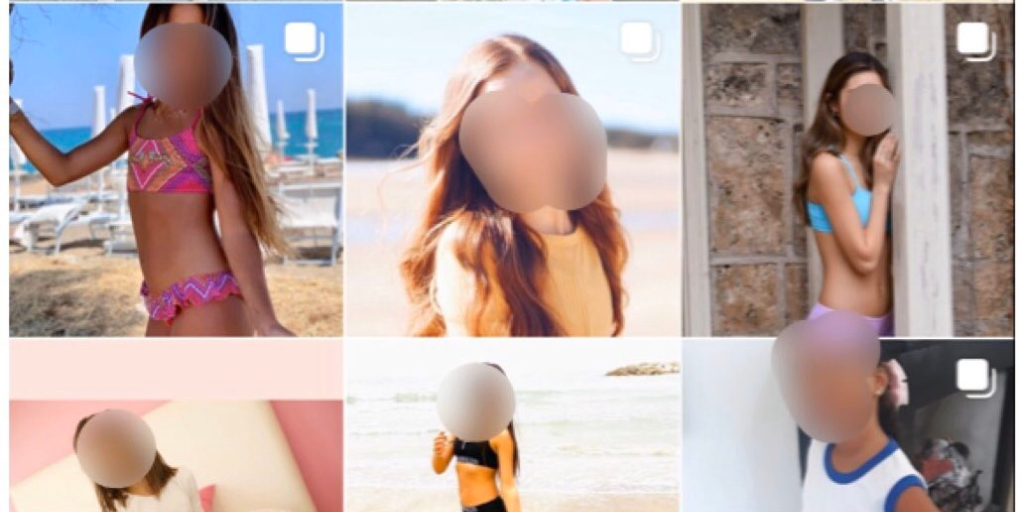 An Instagram feed filled with prepubescent girls in bikinis

The setting is a picture of after-school normality: an average kitchen in a home in Australian suburbia. Two girls in school uniform do what kids up and down the eastern seaboard are doing: arriving home after a long day of school, they dump their school bags and head to the kitchen to make a snack.

One of the girls - 14 according to information on her Instagram account - casually picks up her phone. Still in her uniform (easily providing information about what school she attends and where) she opens Instagram and with a tap of an icon starts a live post: a livestream video that her followers can watch. Instagram even promotes the live broadcast. I, one of her 12,000 algorithm-procured followers - and one of hordes of strangers whose identities, whereabouts and motives for watching a 14 year old girl are unknown - get  an Instagram notification that she’s started a ‘live’. I click her avatar to start the livestream, and instantly I’m transported into the family kitchen. The girl and her friend occupy the foreground, creating a soundtrack with teenage chatter. In the background is a fridge plastered with photos, bills and reminders – artefacts of average family life.

One of the 50+ viewers makes a request to ‘be in’ the ‘live’. This request is one of Instagram’s built-in live-post features that allows viewers to interact with the host via a simultaneous, live video broadcast which the other viewers can see. The girl accepts the request, smiling curiously at the screen as she scans viewers’ incoming comments. As she does, my screen splits horizontally, making way for the viewer’s live video broadcast.

The girl bursts into nervous laughter and steps out of view, leaving viewers to watch the fridge and the man. He repositions his phone to show his genitals from a different angle before his school girl host returns, hand over mouth, and ends his live video. With the screen to herself again, she continues her live post giggling, while, from off-camera, her friend makes a comment to the effect that they shouldn’t be laughing: it’s not funny.  But they don’t appear all that shocked. It’s almost as if this isn’t the first time a stranger has made a sexual approach this way, as though this after-school event is also normal. Parents aren’t told, no alarm is raised. They continue with their live post - even accepting another viewer’s request to be in the live post.

Who else witnessed the live sex act? Other school friends? Perhaps younger children – cousins or neighbours who tuned in to catch up on some big-girl news? How widely did Instagram disseminate this piece of child exploitation material that it failed to moderate and helped produce? How many times is this scene being played out in Australia each day? How many kitchens and bathrooms and bedrooms of Australian homes are being infiltrated by predators who want to abuse underage girls in this way? How many men are using Instagram to broadcast live sex acts to children? Has this type of criminal behaviour become ‘normal’ for girls who have been desensitised to predatory advances because sexual objectification, harassment and predation are so entrenched in their everyday, lived experiences? Why - in flagrant disregard of human rights, law, child safety principles and common sense - is Instagram connecting predators to minors?

In the week since I first saw men masturbating via live videofeed at those girls, I have not been able to erase the images from my mind. These are among the most disturbing things I’ve come across since my colleagues and I began investigating hundreds of predatory approaches to underage girls through their Instagram pages. Within a short time of making a report to Instagram about the 9 year old girl her account was removed. But how many backup accounts does she have? How long until she creates a new account? How long until Instagram reconnects her old followers to her? How long before they're again using Instagram as a webcam to broadcast live sex acts to her and other children? How many other victims are there? And what does the future hold for these girls who have been groomed by Instagram's predators to believe that men exposing and rubbing their genitals at them is normal? Will they be safe from unwanted sexual advances from their bosses and colleagues? From strangers? Will the #MeToo movement mean anything for them? Will others enable men to harass or commit other heinous, sexual crimes against them, the way Instagram did in their childhood? 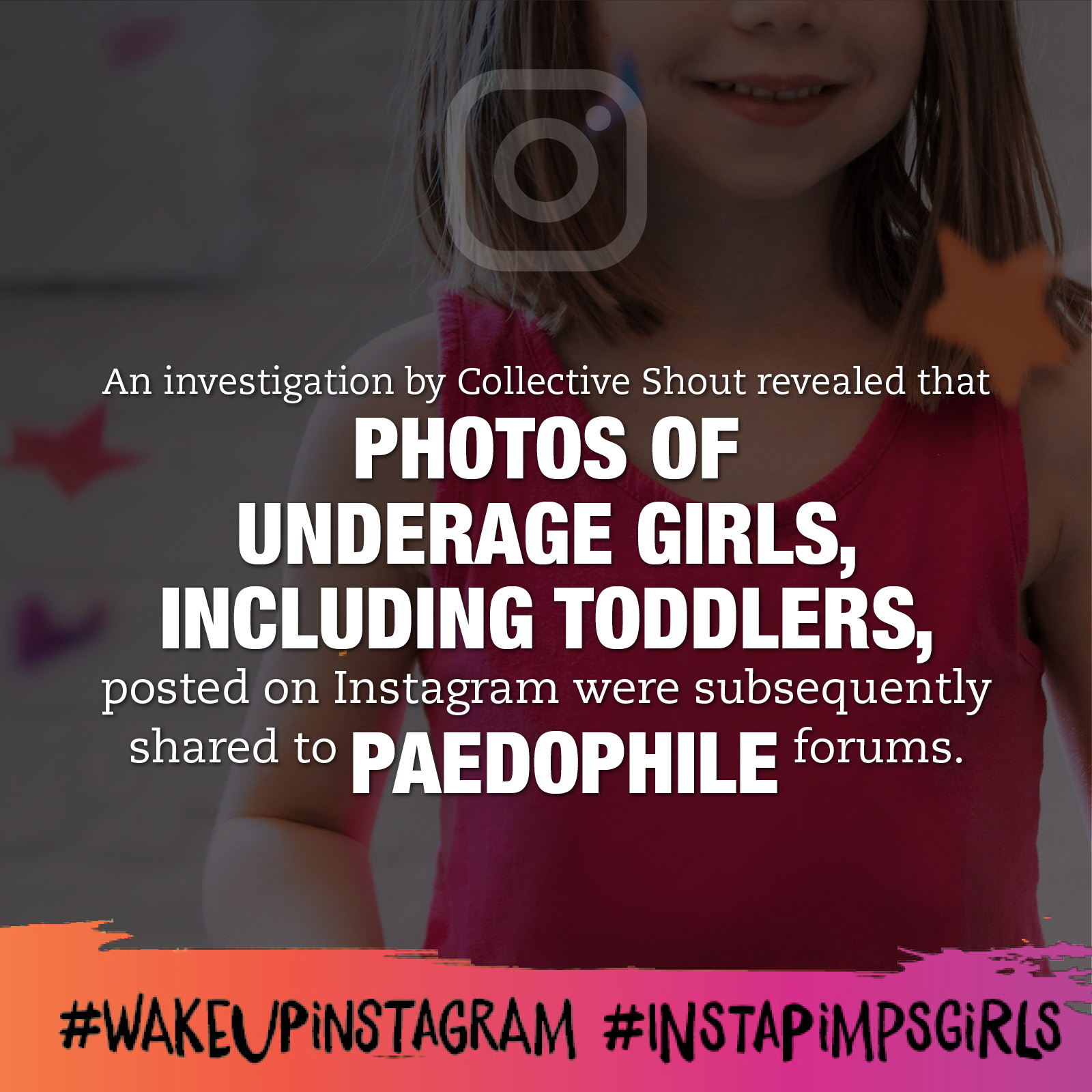 In November 2019, Collective Shout, in coalition with the National Centre on Sexual Exploitation in the US and Defend Dignity in Canada, launched #WakeUpInstagram - an international campaign to hold Instagram and Facebook executives accountable for the exploitation and predation of underage girls on their platform to try to leverage our combined weight to force the platforms to act.

We then wrote to Instagram’s Head of Global Policy with some of our key discoveries, including countless sexualised and predatory comments made by men to underage girls, and to ask Instagram to address its widespread child predator problem. In the letter we made several recommendations and asked Instagram to stop adults from contacting minors during live posts. Having viewed several live posts hosted by girls as young as 11, we knew that men were using ‘lives’ to harass and solicit sexualised content from minors.

Instagram’s catchphrase rings of utopian ideals of boundless connectivity: “Bringing you closer to the people and things you love”. When juxtaposed against our discoveries which show that the ‘people’ are often predators, and the ‘things’ they love are underage girls, the slogan rings sinister. Nowhere in society are we fostering connections between child predators and children. In fact we are vigilant in our efforts to prevent such connections. Why are the rules different for social media companies? Shouldn’t Instagram not only stop connecting predators to children but work fastidiously to prevent these connections? 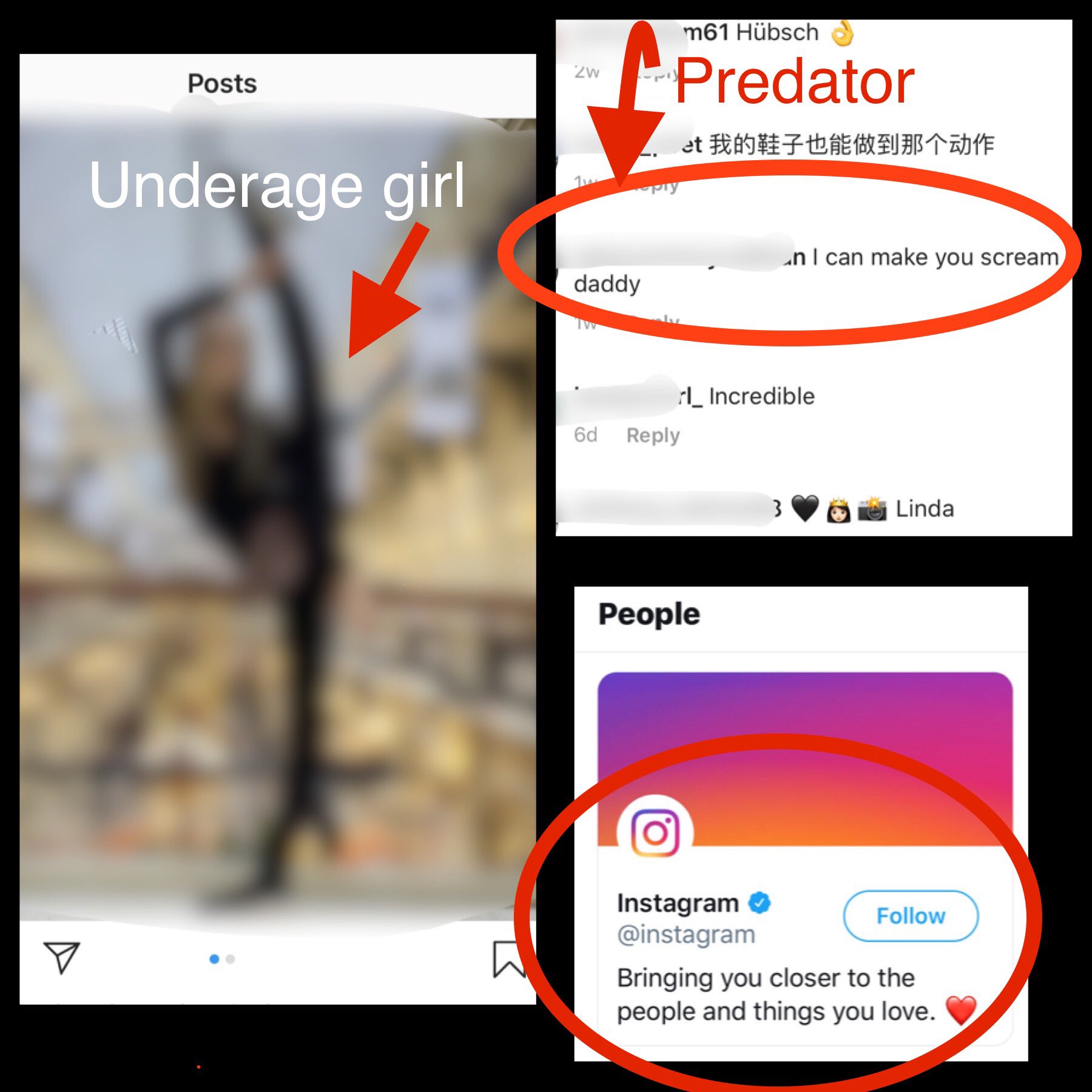 In a timely report, the United Nations Special Rapporteur on the sale and sexual exploitation of children highlighted some of the dangers of social media that we - through the #WakeUpInstagram campaign - are calling on Instagram's corporate leaders to address:

The report further pointed out that offenders are empowered by impunity:

'Ultimately, the essential feature of most offenders is their knowledge or belief that their actions will go unpunished'.

Our investigations have shown that predators are fed a steady stream of victims via Instagram’s algorithms and that predators are free to roam and prey at will, not just with impunity but with the endorsement of moderators who tell us their behaviour ‘doesn’t go against community guidelines’. 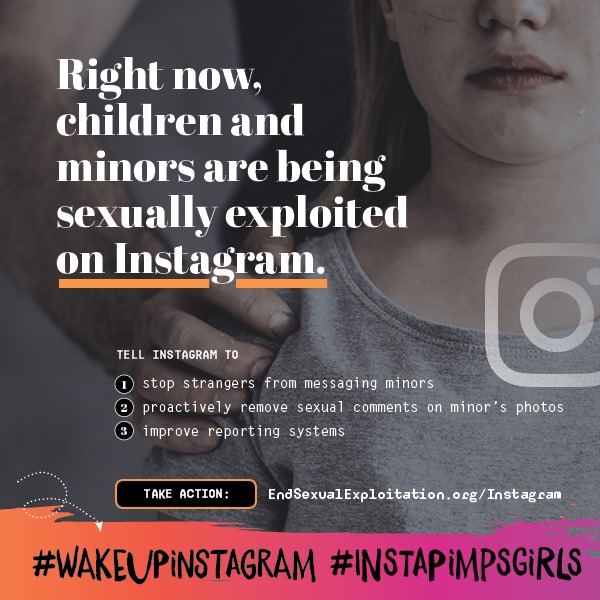 Australia is at the forefront of global efforts to improve online safety. The Office of the eSafety Commissioner’s user-centred initiative, Safety by Design, was the outcome of consultation with industry, service providers, parents and young people and resulted in a set of principles that prioritises user rights and safety. Safety by Design highlights the imperative role of service providers like Instagram in the broader context of shared responsibility for online safety. It spells out eight initiatives designed to 'ensure that known and anticipated harms have been evaluated in the design and provision of an online service'.

In the same week we witnessed how Instagram is used by sex predators to broadcast live sex acts to children, its parent company Facebook committed to a set of new, voluntary standards developed by the Five Country Ministerial (represented by government Ministers of Australia, the United States, the United Kingdom, Canada and New Zealand) to combat online child sexual exploitation and abuse.

Can Instagram abide by these principles and standards without a drastic overhaul to its ethos and operations? While it is underpinned by ideals like boundless connectivity which connects child predators to children? While it stands by community guidelines that accommodate the sexual harassment of little girls? While it indiscriminately gives its users tools - like 'Explore' and live posts - which predators can use to find child victims and commit sexual crimes against them?

'We cannot overlook the significance of a wider culture that sexualises children and treats them as appropriate objects of men’s sexual desire.'

Instagram - through its predator-friendly policies and practises - has fostered a community that fetishises underage girls and helped fuel a culture that normalises their sexualisation and harassment. Now - as well as upholding the principles it has committed to, Instagram must work to eradicate its child predator community, and to foster a culture in which the sexualisation, harassment, exploitation and abuse of children is unthinkable. We owe it to girls and women - this and future generations - to make sure they do.

Executive "mega-pimps" must be held accountable for facilitating sex trafficking

*Content warning - Facts and censored images may be distressing*