At my last public engagement of 2018, after the other boys had left the gym where I had presented, a young man approached me. Hesitantly, hands in pockets, tears pooling in his eyes, the 16-year-old said: "I have done those things to girls you talked about. I don't want to be that kind of man. I want to change. How can I make up for what I've done wrong?" The acknowledgement of his guilt, his desire to make amends, moved me deeply. Tim and I talked a while longer. I understood his desire to change was real. 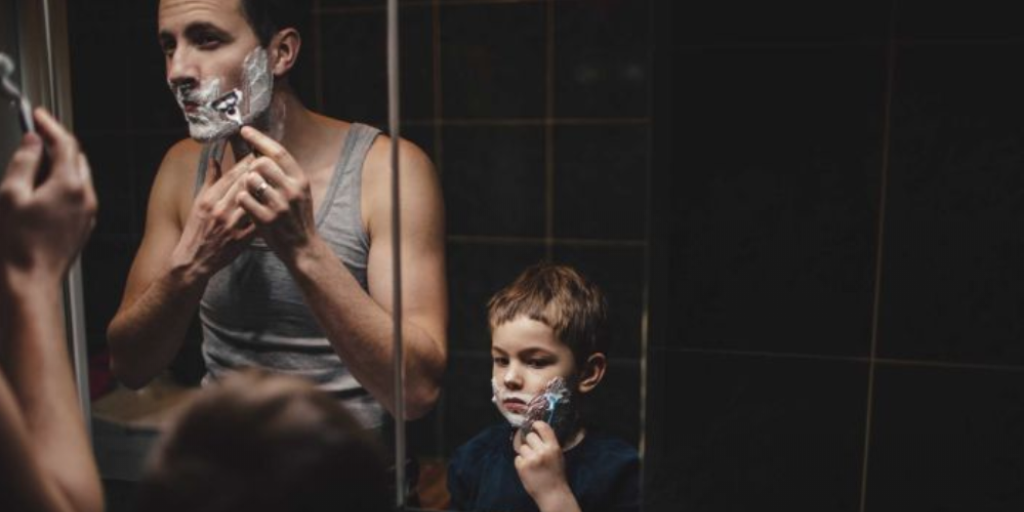 This encounter represents a shift I have noticed taking place over the past year: more boys wanting to break out of harmful patterns, narrow expectations and deforming cultural messaging that they should be dominant and entitled to take what they like from girls.

Earlier in the year there was Steven, also 16. He leapt to his feet, passionately castigating his classmates at a Tasmanian public school for laughing at images of violence against women during my talk. "How dare you laugh," he said. "This is serious, you can't just laugh it off." And then there was the 17-year-old Pacific Islander at a school in Melbourne's west who said he intervened to stop the molestation and filming of a drunk girl at a party.

Later there was Canberra student, Braden, aged 16, who, at a Catholic youth festival in the Homebush arena attended by thousands, publicly said he was sorry to any young women who had ever been hurt by a male. The place erupted in thunderous applause and cheers.

Another time, at a WA secondary school, a boy at the back of the room stood up and told of how he had no friends, how he was bullied every day at school, how his brother had lost his life to a drug overdose. He broke into sobs. A student in the front row arose, walked to the back and hugged the first boy in a gesture which took my breath away. I had to step outside to pull myself together.

The faces of these young men came to mind when I watched the now notorious advertisement We Believe: The Best Men Can Be, released by shaving company Gillette. These faces of good boys; sorry boys; boys who stepped out of the pack and did the right thing, said the right thing, at the risk of disapproval; boys who felt the sting of ostracism for calling out bad behaviour, but knew their integrity was intact. The boys who recognised there was something sick at the heart of aggressive versions of masculinity and didn't want to adopt its codes. The boys who are now part of what could become ― were we to allow it ― a cultural tipping point in dismantling and transforming harmful cultural attitudes about the way men and boys should be.

I'm not heroising Proctor and Gamble, Gillette's parent company. We need to be cynical about profit-driven corporations appropriating social movements. And the company has been implicated in child labour exploitation for palm oil extraction, which is hardly the best a company can be. But the furore over a two-minute ad extolling the central idea that men can help other men do better, reveals just how far we have to go.

The video is directed by London-based Australian-born Kim Gerhig of ad agency Somesuch. The mother-of-two is probably best known for the "This Girl Can" campaign (she has also previously explored Australian masculinity in a raw short film).

The new Gillette ad inverts the company's original 1989 slogan, "The best a man can get," then associated with muscles and attractiveness to women. Gillette said the ad was part of a broader initiative for the company to promote "positive, attainable, inclusive and healthy versions of what it means to be a man" ― including a $1million annual endowment for three years to projects supporting men and boys.

The ad echoes themes explored more deeply in the Representation Project film The Mask You Live In and, more recently, The Work. It contributes to a spreading movement for more compassionate, empathetic expressions of masculinity. According to the company, the ad was informed by a survey in which it asked people across the United States what a man "at his best" looks like. The most positive traits were honesty, moral integrity, being hard-working and being respectful to others.

We are desperate for change. The sexist jokes, girls daily enduring catcalling and comments on their bodies, demands for naked selfies, wall-to-wall advertising depicting women as only good for one thing. "I'd like to f*** that!" a teen boy was overheard quipping to a mate as they ogled a Honey Birdette window display in a Westfield shopping centre, owned by Scentre Group, whose CEO professes to be a "male champion of change." Research has demonstrated that sexist views contribute to women being harmed, but that doesn't stop UltraTune's routine on-air sexism, currently featuring serial abuser Charlie Sheen as a "winner" in ads run during Channel 9's Australian Open broadcast.

Then, in the final outworking of the degradation to which women are so often subjected, Arab-Israeli exchange student Aiia Maasarwe had her life brutally taken from her in Melbourne ― as had Jill Meagher and Eurydice Dixon before her.

It is into this swirling trauma that the Gillette ad appears. I doubt that anyone would have thought that this ad would solve the problem of sexualisation and everyday violence against women. But there was at least something consoling about seeing representations of good men taking action to hold each other to account, and to be what men should be.

However, the ad has met with an avalanche of abuse. Women who publicly approved of its positive message were vilified as misandrists, feminazis, emasculators, castrators. Men who expressed approval were called "SoyBoys" (victims of a Leftist plot to feminise men). One online commenter even claimed that Gillette was engaging in male genocide. The ad's director was a "social terrorist"in a posted comment on the original YouTube clip and a "virulent Trump hater" in a BreitbartCapsLock headed sledge.

But the criticisms haven't been confined to the internet's more extreme, unregulated corners. In a piece in The Australian titled "Masculinity condemned to death ― by 1000 cuts," Bettina Arndt called the ad "dark," "shocking" and said it attacked Gillette's "customer base to announce to the world that everything about masculinity is bad, dangerous and deficient". Similarly, in the Weekend Australian, sociologist Frank Furedi said the ad "reinforces the message of male pathology" in "a crusade against masculine identity."

Watch company Egard offered its own response in the form of a "counter ad" (widely received as an "up yours" to Gillette). It depicts men as heroes in traditionally understood ways ― fighting fires, wars and other things that need fighting, with the theme, What is a man? "Is a man brave? Is a man a hero? Is a man a protector? Is a man vulnerable? Is a man disposable? Is a man broken? Is a man trying?" Alongside each question are stats about the death of men in war fatalities, homicide, among others. It concludes "We see the good in men."

But how do these depictions defeat those in the first ad? Can't they all be held together? The Egard ad has men trying. So does the Gillette ad.

Critics say men disproportionally suffer suicide, mental and physical health problems and dysfunction (as if we are all competing in some suffering competition). What is missed here is that collective male socialisation and codes of behaviour put men in straightjackets and make them sick, too: is it not possible that they are in crisis because they are playing a game that is making them unwell?

Positions on the Gillette advertisement were so diametrically opposed, you had to wonder whether everyone was watching the same thing. Why was it so threatening? Did those leading the pile-on not hear the narrator say, "We believe in the best in men"? Did they miss the bit about men being part of the change, that good men can hold one another to account and model good behaviour to boys and other men?

The ad is aspirational: it rewards the men who don't excuse bad behaviour, don't look the other way, as men to aspire to. It prioritises these men and holds them up as models. They can perform the role of the interrupter, protector, fighter on behalf of the vulnerable (including young boys). Yes, we are all sick of virtue signalling. But does this mean there is no room for virtue encouraging? What is so wrong with urging men to be their best selves? Perhaps it is easier to rail against the company than to engage in self-reflection and evaluation. After all, to have to re-evaluate and examine one's behaviour can expose any of us to unpalatable truths.

This reflexive defensiveness poses a serious problem. The risk is that an ad campaign, which could contribute to a deeper cultural reckoning, will instead be lost in a tsunami of backlash causing a battening down of hatches, a justification of poor behaviour, an emboldening of the bad. It would be more than unfortunate were this to happen because of a fundamental misunderstanding about terminology. Toxic masculinity is being read as "men are innately bad, defective and pathological," whereas what is (mostly I think) intended is "certain expressions of masculinity are problematic" ― learned through collective social conditioning, including from institutions, culture, political systems and family-of-origin.

This was what the American Psychological Association guide was trying to address in linking adverse codes of masculinity with negative mental health outcomes in its first ever Guidelines for Psychological Practice with Boys and Men, which were developed over 13 years and drawing from four decades of research. The guidelines identify rigid norms, stoicism, dominance, aggression and competitiveness as potentially harmful for men. The more men conformed to "traditional masculine ideology" the more their psychological development was limited, and the more they considered risky health behaviours ― such as heavy drinking ― normal. There was a reluctance to admit vulnerability or seek mental health services. As The Washington Post commented, "The more men cling to rigid views of masculinity, the more likely they are to be depressed, or disdainful, or lonely."

"We sacrificed worthwhile emotional experiences or connection, but we demanded power in return," writes Luke Hart, a campaigner, with his younger brother Ryan, against domestic abuse after his father murdered his mother, Claire, and 19-year-old sister, Charlotte, in 2016. Echoing this need for connection, in a Guardian article titled "The fear that lies behind aggressive masculinity,"British writer and activist George Monbiot writes:

Those who urge us to shut down, man up and grow a pair push us towards disaster and despair ... Emotionally damaged men all too often rip apart their own lives, and those of their partners and children ... Those who deny their own feelings tend to deny other people's ... What sort of a man are you if you have to go to such lengths to prove your masculinity? The confident construction of identity does not require crude cultural markers, but emotional literacy and honest self-appraisal. The more we proclaim our strength and dominance, the weaker we reveal ourselves to be.

But Monbiot sees hope: "In normalising our frightening conditions, in connecting with others who have been suffering in silence, we find a collective strength we cannot find alone."

It's this collective strength I want the boys I address in schools to find, so that doing the right thing is less lonely. Boys can overcome negative social forces and their own conditioning to see the attainment of emotional intelligence, kindness, empathy and compassion as all part of the best a man can be.