Melinda Tankard Reist as published on ABC Religion and Ethics.

"A new angel has opened his wings!"

"We need more men like Hugh in this world today."

Big names joined the love-in. Rev. Jesse Jackson tweeted in praise: "Hugh Hefner was a strong supporter of the civil rights movement. We shall never forget him. May he Rest In Peace."

Then there was Larry King, Nancy Sinatra, Paris Hilton (who will "miss him dearly") and Kim Kardashian, who declared her love and gratitude for being part of the "Playboy Family" (she appeared on a 2007 Christmas cover, because nothing says Christmas like breasts spilling out of a red body suit).

He "wanted to make the world a happier, sexier place" gushed CNN. One conservative journal even stated that Hefner's "work celebrates the sexual complementarity that has bound men and women together since the dawn of time."

That a pimp and sexual predator could be glorified as an angel, a role model for men and indeed some kind of saviour figure leading us out of darkness, shows how successfully the Hefner/Playboy myth has been embedded in the popular imagination.

A serial collector of women who kept women as pets, like cute bouncing creatures in a petting zoo, is being hailed a hero. A man whose harem of wives, girlfriends, mistresses and rotating cast of Girls Next Door was projected for the vicarious pleasure of millions of men, is, apparently, a modern secular saint. 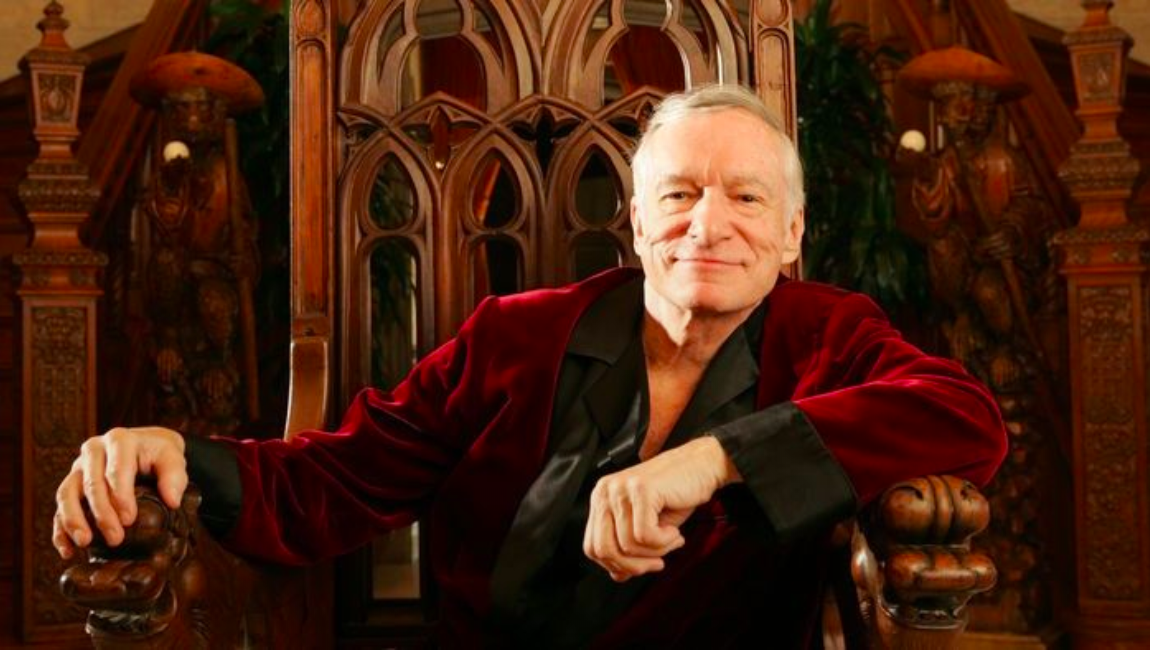 While many think Hefner's entire genre involved dewy young women smiling topless in a cornfield, he legitimized and mainstreamed the sex-trade and provided the economic, cultural and legal structures for the current multi-billion dollar market of today and its more hardcore and gonzo evolutions.

All the same, Hefner himself admitted that blond, white women made up most of the models in his pages. "We try to get some ethnic diversity, but we do seem to lean in the direction of blonds," he said.

The brutality of sex with Saint Hef

So, was he really a man who merely loved women? A look inside the Playboy Mansion tests the theory. Beneath the glamorous image, Hefner's playmates testify to filthy rooms, urine soaked carpets thanks to nine dogs, bunnies having to line up and watch and wait for their $1000 a week allowance until Hefner had collected the dog faeces, and strict curfews and iron gates to keep the women in check.

As for the sex, there was no protection. Bunny girls were offered Quaaludes, which Hefner himself called "thigh openers." Although disgusted at the prospect of having sex with him, the "girls" understood that it was "part of the unspoken rules." "It was almost as if we had to do it in return for all the things we had," said one.

On her first experience of sex with Hefner, Holly Madison recalls:

"I have never had a more disconnected experience. There was zero intimacy involved. No kissing, nothing. It was so brief that I can't even recall what it felt like beyond having a heavy body on top of mine."

Hefner was a man who, according to his valet, liked to see women suffer:

And while Hefner kept the local cosmetic surgery practice in business, too bad if your breast implants burst:

"Hef wasn't a kind man ... He was very brutal to his girlfriends and sex partners. He made sure they had breast implants. In those days, the implants were new and they would shift and burst and I witnessed many women who had this done begging and crying to Hef to help them and he would put them back in the hospital and then discard these women. He didn't care. They were disposable."

A high number of Playmates have died young from drug overdose, suicide, homicide, or some other unnatural cause, including Bill Cosby's particular favourite who later ended it all with a bullet to the head.

It wasn't just official Playboy bunnies who were expected to serve Saint Hef. Laurin Crosson, a fellow activist and sex industry survivor who runs a safe house for women escaping prostitution in the United States, shared this on her (personal) Facebook page:

"But especially thanks for asking me if your 'photographer' could take a picture of my vagina for your 'private collection', you asked this in front of a room of people, all seeming to laugh at my uncomfortable stutter. I was 16. I was scared and felt so pressured."

Hefner liked to display the charms of the younger members of the female species. They were used as centrefolds and playmates, diversifying the masturbatory mix on offer to his loyal followers. This truth relating to Playboy's girl-child centrefolds and bunny-eared girl children has not been properly acknowledged - certainly not by the writers of rosy obituaries. How could this practice go unremarked by so many?

Playboy linked "innocent children with strong Playboy orgasm-based stimuli" in the words of U.S. researcher Judith Reisman, who documented Playboy's treatment of pre-pubescent girls. Playboy, Reisman found, was deliberate in its eroticisation of girl children. In one year alone, 39% of Playboy centrefolds were of children under 12. Brooke Shields, then 10, was posed as paedo-fantasy material in Playboy Press 1975 publication Sugar N Spice, made up to look like an adult woman in a girl's body. Eva Ionesco, at 11, became the youngest model ever to appear in a Playboy nude pictorial. One image, depicting a girl lying face down naked with a doll on Disney sheets, is captioned: "BABY DOLL. It's easy to feel paternalistic toward the cuddly type above. Naturally, she digs forceful father figures, so come on strong, Big Daddy."

Sexual violence, and other forms of "Entertainment for Men"

"When your rape is entertainment, your worthlessness is absolute. You have reached the nadir of social worthlessness. The civil impact of pornography on women is staggering. It keeps us socially silent, it keeps us socially compliant, it keeps us afraid in neighborhoods; and it creates a vast hopelessness for women, a vast despair. One lives inside a nightmare of sexual abuse that is both actual and potential, and you have the great joy of knowing that your nightmare is someone else's freedom and someone else's fun."

Wife beating also fit within the magazine's "Entertainment for Men" subtitle. As recently as 2000, Playboy published a Romanian article entitled "How to Beat Your Wife... Without Leaving Prints," which provided instructions in carrying out wife battery without getting caught.

Behold, then, your hero of the sexual revolution: paedo-fantasies, girl children depicted being violated, rape comics, sniggers over sexual harassment in the workplace, wife battery as the stuff of humour - on these evils, Hefner's celebrity sycophants have nothing to say.

Bras N Things dutifully posted a tribute to Hefner on its Instagram page: "The man that inspired it all ..." On this we can agree.

Glosswitch, writing in the New Statesman, describes the depth and reach of Hefner's harmful impact:

"Hefner feminism is all around us. It's the feminism of pre-teen girls seeking designer vaginas; of men who rent out vaginas and wombs; of women who diet, shave, starve and never say no. We're not free from oppression, but oppression is no longer stigmatised. Isn't that enough?"

But Hefner was not about equality or empowerment for women. (The self-interested funding of abortion rights doesn't count - after all, pregnant bunny girls didn't make nice centrefolds and what self-made Playboy-aspiring man wanted to be saddled with some kid he'd unfortunately sired when all he wanted was sex?)

In a 1999 interview with Hefner, NPR's Terry Gross commented on the 52-year age and power disparity between Hefner and his "girlfriends," his life experience and the fact he has amassed a fortune; she observed: "They're not even out of college yet so it wouldn't be possible to function as your equal." Hefner replied: "Is that of some importance?"

Female equality was not important to him - so why are so many people saying it was? Hefner sold a commodified view of women, and branded it as a form of freedom. What he did was, more accurately, orchestrate a diabolically effective backlash against the perceived "womanisation" of America. It is no wonder, then, that "sexual freedom" came to look an awful lot like a male fantasy.

But this propaganda, outfitted in bunny ears and cottontails, has resulted in a putrid, retrograde and destructive legacy which no amount of post-mortem deification can sanitise.

In a final indignity to the most famous woman he famously exploited, Hefner is to be buried next to Marilyn Monroe, whose image he used on his first cover without her permission or payment. Though born in the same year as Hefner, she was dead at 36 after being "digested by the culture that consumed her." And it is this culture which is the house that Hef built.

As published on ABC Religion and Ethics.