The Lingerie Football League - lets not pretend it's about sport

Scroll down for more details on how to take action

Lingerie football is the latest ‘sport’ (fad) to come out of America, and is now making its way to Australian shores. The Lingerie Football League (LFL) is exactly how it sounds. Female football players wearing lingerie while playing football; or more specifically a modified version of US NFL football.

The LFL began as a form of half time entertainment for regular NFL games on Super Bowl Sunday, but has since grown to become what is now being marketed as ‘the ultimate live sports experience’. This blatantly sexist game does not represent a true ‘sport’, or women as serious sports players.

Rather, as its own official website describes, the LFL is ‘True Fantasy Football”.

Despite the blatant objectification of women and even the LFL’s own website claiming that it is a ‘fantasy’ sport, they continue to claim that it does not objectify women.

Is it objectifying women? I don’t think so. They’re all educated women, they wouldn’t allow themselves to be objectified”, said chairman Mitch Mortaza.

However, Mortaza has also admitted in interviews that the selection of female players is based on their physical appearance.

Looks are definitely a part of it. We don’t pull any punches there. We have to be able to market this sport.

Does Mortaza even know what ‘objectification’ is?

The contract designed by the league shows female players have little choice other than to be objectified if they wish to play. The contract, which ensures women wear as little clothing as possible, gives the league the right to fine players as much as $500 if they wear anything underneath their lingerie.

Player shall not wear any additional garments under wardrobe provided by producer without prior consent…Should player violate this clause, player shall be fined a total sum of five hundred dollars per occurance.

The uniforms make it inevitable that these women will have their breasts and more exposed at some time during the game—which is exactly what Mortaza and male fans are hoping for. A specific clause in the contract regarding ‘accidental nudity’ says:

If you want to be considered a 'real athlete' you can't object. This was acknowledged by Mortaza himself when speaking with The Times.

When speaking about the safety requirements for the sport, Mortaza claims on the LFL website that,

“We at the LFL consistently test our equipment to insure the highest degree of safety and challenge our partners to continue to develop the next generation equipment that will further protect our players.”

It is hard to imagine how lingerie, a hockey helmet and some knee pads constitute as ‘the highest degree of safety’. The LFL has been careful to design their ‘safety equipment’ around the premise of maximum body exposure. Martin Winquist from The Sheaf (2012) writes:

“Both the lingerie and the padding (consisting of modified football shoulder pads, optional elbow pads, knee pads and hockey helmets with half-visors) are minimal enough to ensure none of them obscure the usually ample cleavage of the athlete. If you’re an ass and legs person though, don’t fret; the booty shorts and required garter make sure “the girls” don’t monopolize one’s ogling,”

Winquist rejects the notion that the game is not about objectification, explaining that:

“As much as the league’s media spin-doctors may claim the league is about football and that these women are just like any other athletes, one look at the uniforms, the equipment, the ads and the athletes themselves must send our bullshit detectors into overdrive. Don’t get me wrong, these women are certainly athletes, but if you think of them as similar to professional wrestlers you’re on your way to understanding the LFL.”

When questioned about their reasons for joining the LFL, the female players seem torn between standing up for their ‘sport’ and being truthful about the way they are objectified.

Tampa Breeze Florida player Liz Gorman spoke with CBC Radio earlier this year about how she loved playing football and wanted to be a positive role model, but she seemed lost for words when questioned about how she could support women’s sport positively whilst having to wear uniforms that were clearly exploitive.

“I’d rather wear full clothing. Because when you fall, it literally rips your skin. I’d love more clothing, but at the same time like any sport, the players don’t get to choose the uniform.”

“Sex sells…It’s a business. We don’t get the same media as men… so it’s obviously not the players that are choosing this,”

LFL player Gorman also confirmed in her interview with CBC that aside from the all-star games, the female players do not get paid. Below is a transcript of the conversation.

Gorman: “No…it does get frustrating.”

CBC: “It sounds like you’re doing it because you love to play football and you want to play, and you accept the other sacrifices that come with it.”

Gorman: “Yeah…(silent for some time). It’s the truth,”

So while athletes like David Beckham get paid millions of dollars to play sport fully clothed, the message that the LFL spreads is very clear: if you’re a woman accept that you have to play half naked, accept instances of ‘accidental nudity’, injure your body on the field due to lack of safe clothing, and to top it all off do it for free.

Despite all of this, sadly there are several female players who have fallen for the lie that LFL doesn’t objectify women. Chloe Butler (Australian LFL player and former Playboy model) stated that she “definitely wouldn’t be a part of it” if the game objectified women.

“You have to admit it, marketing is a huge part of the entertainment business,”

Butler likened it to the use of sex appeal by English footballer David Beckham.

Apparently the fact that Beckham is paid millions of dollars for playing sport – and we might add, completely clothed—while these women are paid nothing for wearing lingerie, failed to register with Butler. While Beckham may be marketed sexually in his underwear advertisements, he is definitely not asked to sacrifice safety for ratings.

Adrian Purnell, two-time LFL All Star with Tampa Breeze, also seems to be under the deception that men see them as ‘real athletes’.

Purnell, it is actually the lack of uniform that brings the customers in, and the player's bodies that keep them coming back for more.  Fans comment :

“I feel bad for the girls playing this taking it seriously. No1 but the players are even the slightest bit interested in athletic ability...”

“Nude football would be better- make it happen bastards,”

“The LFL sucks now. It used to be the girls wore "Booty Shorts", meaning they, ya know, SHOWED BOOTY. It seems that they made the bottoms way more conservative. Just saw the LFL bowl and there was virtually no ass cheek showing. Should have been called the ’Girls in Conservative Shorts With No Ass Cheek Showing Bowl’. Just a total waste.”

It has however, been encouraging to see some women’s sports advocates already speaking out about the Lingerie Football League.

University of Sydney sports management Professor Tracy Taylor quoted in The Brisbane Times says the league has little to do with sport.

“The game itself of course is based on physical activity, but the hype surrounding it and the target audience are not generally attending to support sport but to be 'entertained' by women running around in their lingerie getting hot and sweaty and getting physical with one another,” Professor Taylor said.

“While many of the players in the existing league are athletes they are certainly not taken seriously in North America and I can not see how the introduction of the league here would be good for women's sport.”

This League is sexist and demeaning to all women. In a society where women have been seeking and starting to secure equal rights and respect on and off the sporting field, this development undoes so much of the hard work being done by many sporting organizations across the country.

By asking us to strip down to our underwear to play sport, we can only assume that the Leagues do not consider women talented enough to play a sport fully clothed, and are therefore spreading a hateful message that women need to accept that their bodies (or more importantly, men’s views of their bodies) are the only way of affirming their worth on a sports field. 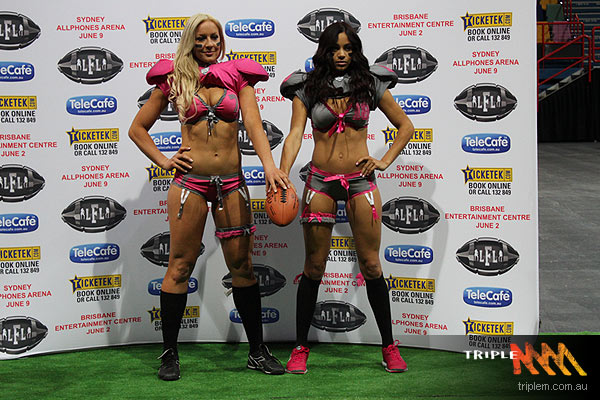 The Australian Sports Commission states that the LFL does not adhere to the “core principles of sport in Australia—fairness, respect, responsibility and safety,” and therefore is not as a sport that they support. However, we have already seen Ticketek Australia and Triple M advertising the LFL in Australia as a ‘sport’, and therefore it is vital that our Government steps in.

Concerned writer Lily Munroe contacted the Commission and explained that whilst they may not consider it a ‘sport’, “the government should still hold the same responsibilities to its people as set out by the ASC.”

Munroe also points out, as the ASC states, that

‘sexploitation is not simply a matter of skimpy costumes on female bodies. It is also the inappropriate portrayal of female athletes either in their sporting apparel or in alternative situations.’

There is a wealth of research which links the sexualisation of women to poor body image and eating disorders, and the creation of LFL is no different. It teaches young women, men, and athletes that women have no place in sports as a ‘serious athlete’, only as a sexual object.

Introducing such a ‘sport’ into Australian culture will only increase the already high number of women suffering from poor self-body image, and will alienate many other women who want to play sport but either don’t fit the physical mould presented by LFL, or don’t feel comfortable in such an environment.

Thanks to Jasmine Swilks for writing this article and to Lily Munroe for research.

You can stand up against the LFL bringing their sexist portrayal of women’s sport to Australia by signing the petition on www.change.org

Please also sign this petition started by a group of Melbourne School Students:

Triple M: Stop the promotion and support of A Lingerie Football League in Australia

Stop promotion and sponsorship of the Lingerie Football League

Storm in a D-Cup over game