Collective Shout supporters will deliver our 135-page Change.org petition  containing 6000-plus signatures in Diva stores in various states this weekend.

We will be letting Diva know personally that pimping one of the signature brands of the global sex industry to its key target customer base of 8-13 year old girls takes corporate social irresponsibility to new heights.

The main delivery took place at Diva’s Pitt Street store at 11am this morning.

Here’s a statement issued through Change. I look forward to sharing some photos with you. I believe a Playboy bunny known by her stage name Myximotisis will make a surprise visit to a NSW Diva store on Sunday.

SYDNEY, NSW – A group of parents, psychologists, women, and teens

delivered more than 6,000 signatures from an online petition campaign on Change.org to Diva Accessories’ Sydney store today. The group is demanding that the fashion jewelery store stop selling and marketing pornography brand Playboy’s products to pre-teens and little girls.

The petition was handed over to the company by child and adolescent psychotherapist Collett Smart.

“Playboy is now a billion dollar global brand profiting from the exploitation and subordination of women,” Smart said. “Now it has craftily adapted products to suit a younger clientele – but the message is the same. ‘Playmate’ pendants and even pencil cases emblazoned with the infamous bunny reinforce the damaging idea that girls are simply sexual objects.”

Collective Shout, a grassroots campaigning movement against the sexualisation and exploitation of young women, launched the campaign against Diva just three weeks ago. Within hours of the campaign’s launch, Collective Shout recruited thousands of supporters on Change.org, the world’s fastest growing platform for social change.

Thousands of people from all over Australia have since registered complaints, called Diva’s head office, and posted thousands of messages on Diva’s Facebook wall protesting against the promotion of a brand they say systematically degrades and objectifies women.

“Diva’s Facebook page says it encourages feedback but they’ve been unable to respond to all the criticism and it has become a real public relations nightmare for them” said Melinda Liszewski from Collective Shout.

While most comments have since been deleted, weeks of complaints and responses on Diva’s Facebook page have been captured on the Corporate Failings blog, which described Diva’s approach as “Perhaps the most blatant example of consumer disregard we’ve come across”.

"Diva’s target market is 8-13 year-old girl,s and the company has put its head in the sand in response to the calls of mothers, fathers, and daughters, along with concerned individuals from all round Australia," Liszewski said.

The delivery of the 6,000 signatures from the online campaign on Change.org is set to be mirrored at Diva stores across the country throughout the weekend. Parents, young women, girls, concerned shoppers and even an angry Playboy bunny will visit their local Diva store to deliver the same message: stop selling playboy products to little girls.

“What Collective Shout has accomplished in just a couple of week is remarkable,” said Change.org campaigner Suzanne Culph. “Armed with only their laptops, they have managed to recruit more than 6,000 supporters from all across Australia to call on Diva to think more carefully about its customers. Change.org is about empowering anyone, anywhere to demand action on the issues that matter to them, and it has been incredible to watch Collective Shout’s campaign take off.”

The Age’s coverage of the campaign

Herald Sun’s coverage of the campaign

For more information on Collective Shout

Collective Shout is a grassroots campaigns movement mobilising and equipping individuals and groups to target corporations, advertisers, marketers and media which objectify women and sexualise girls to sell products and services.

For more information on Change.org

Change.org is the world’s fastest-growing platform for social change — growing by more than 400,000 new members a month, and empowering millions of people to start, join, and win campaigns for social change in their community, city and country.

The winner of our Diva caption competition 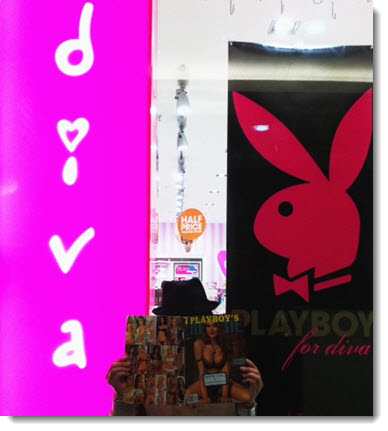 Collective Shout has announced the winners of our caption competition for this image.

When did Halloween get R-rated?, Paula Joye, The Age