Women should be able to speak out without facing rape threats

*Trigger Warning - Graphic descriptions of rape and violence against women*

In June this year, I was subjected to an horrific torrent of abusive tweets from fans of rapper Tyler Okonma on twitter when I challenged his lyrics which encourage rape and violence towards women. The abuse was unbelievable. It included direct threats of rape, and at one point, twitter users tried to publish my address. Worse, I was told by police there was no way to stop it other than deleting my account: letting the abusers win.

Nothing has changed. Recently, Caroline Criado-Perez, who campaigned to keep women on banknotes in the United Kingdom, has been targeted repeatedly, with rape threats over three days because of her campaign. We have to be able to change this - and urgently.

Women should be able to speak out without facing threats of rape and assault.

I’m asking for your help to get Twitter to urgently add a Report Abuse Button to tweets on all platforms. It won’t fix everything - but it’s a good start. We know they're listening - but they need to move quickly - this is out of control.

At Tyler’s concert, he told his fans he hoped my children got STDs, and “dedicated” songs to me that included lyrics like “punch a bitch in her mouth just for talkin' shit” - the people who responded to his call to arms are still free to do to everyone else on twitter what they did to me.

It’s time Twitter took a zero tolerance policy on abuse, and learns to tell the difference between abuse and defence. Women standing up to abuse should not fear having their accounts cancelled because Twitter fail to see the issue at hand. This behaviour would have people banned from other public spaces - it’s barely acknowledged as being wrong on twitter.

Please sign my petition to ask Twitter to urgently add a Report Abuse Button to tweets on all platforms. 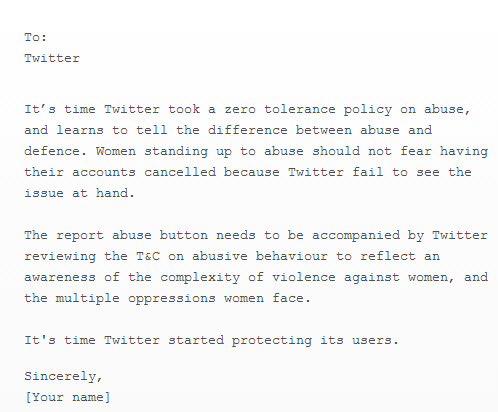 At Twitter, we work every day to create products that can reach every person on the planet. To do that, we must take a wide range of use cases into consideration when designing interfaces or developing user tools. We want Twitter to work whether you are trying to follow your favourite musician, talk to others about shared interests, or raise the visibility of a human rights issue.

We also have to think about scale and volume. We see an incredible amount of activity passing through our systems - there are more than 400 million Tweets sent every day worldwide. Those Tweets not only appear on our site and in our apps, but are also embedded into the fabric of traditional and digital media.

The vast majority of these use cases are positive. That said, we are not blind to the reality that there will always be people using Twitter in ways that are abusive and may harm others.

While manually reviewing every Tweet is not possible due to Twitter’s global reach and level of activity, we use both automated and manual systems to evaluate reports of users potentially violating our Twitter Rules. These rules explicitly bar direct, specific threats of violence against others and use of our service for unlawful purposes, for which users may be suspended when reported.

To the extent that our system is based around the filing of reports with our Trust & Safety team, we strive to make it easier and more practical to file them. Three weeks ago, we rolled out the ability to file reports from an individual Tweet on our iPhone app and the mobile version of our site, and we plan to bring this functionality to Android and desktop web users.

We are constantly talking with our users, advocacy groups, and government officials to see how we can improve Twitter, and will continue to do so. Such feedback has always played an important role in the development of our service. We hope the public understands the balances we’re trying to strike as we continue to work to make our systems and processes better.