Your action has led to these welcome outcomes

As you know, Collective Shout has been at the forefront of a national campaign to de-register Wicked Camper vans plastered with hateful anti-women imagery and slogans – even advocating rape and murder.  It has been a long and on-going campaign: we have been publicising Wicked’s mobile misogyny since we first launched a decade ago.

Now, at last – thanks to your support and the advocacy of like-minded women’s groups and anti-violence campaigners – the dominos have begun to fall.

First to pass a Bill to de-register Wicked was Queensland in 2016. This was followed by the ACT and Tasmania. A bill to achieve the same is currently being debated in the SA Parliament. You can find the joint statement we were part of here.

On October 3 last year we wrote to the then Minister for Roads and Road Safely Luke Donnellan. The Minister referred our letter to the Chief Executive of Vic Roads, Michael Malouf, who replied on November 28:

"There is currently no power to enforce the removal of offensive slogans on vehicles."

We then raised the matter with the new Roads Minister The Hon. Jaala Pulford MP last week (see the letter from our Chair Kylie Virtue and Movement Director Melinda Tankard Reist here).

Today, in a piece titled “Call for national ban on ‘offensive’ Wicked Campers”, The Australian reports: 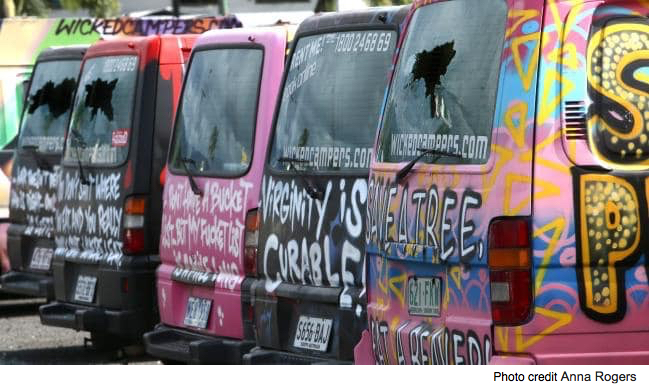 Some states and territories have already moved to ban the registration of the vans, but Victorian Roads Minister Jaala Pulford says that unless they are banned in all jurisdictions, they will continue to appear across the country.

Anti-sexism and family violence campaigners have led the charge against the vans, which feature misogynistic and degrading slogans promoting rape and violence against women.

Slogans on the vans, which often appear in areas frequented by children, have included “Am I still a virgin if I take it up the s*****r?”, “A wife — an attachment you screw on the bed to get the housework done”, and “In every princess there is a little sl*t who wants to try it just once.”

“These slogans are so offensive,” Ms Pulford told ABC radio.

“The thought of these images all over caravan parks with little kids and grandparents and people having lovely family time is just horrendous, and of course for people on the roads behind them.”

Ms Pulford said she had requested the issue be on the agenda at the next ministers’ next meeting of national roads ministers. She said she would be  “amazed” if her state and federal counterparts did not agree with her on banning the vehicles.

We will keep up the pressure to make sure they agree!

Get in touch with The Hon. Jaala Pulford MP and publicly thank her for taking a stand against Wicked Campers mobile misogyny!

***Sign the petition: Drive Wicked Campers off the road***