We congratulate Amazon today for removing the anatomically correct child sex dolls that have been for sale on its website. The sale of such dolls and similar material has earned Amazon a spot on the National Center’s Dirty Dozen List for the past two years.

We also congratulate the thousands of supporters and activists in the UK, Australia, and in the US who have joined us these last couple of years in demanding this change from Amazon. Your calls, petitions, and social media posts have moved them to reject profits from these.

THANK THEM NOW (and demand more)! 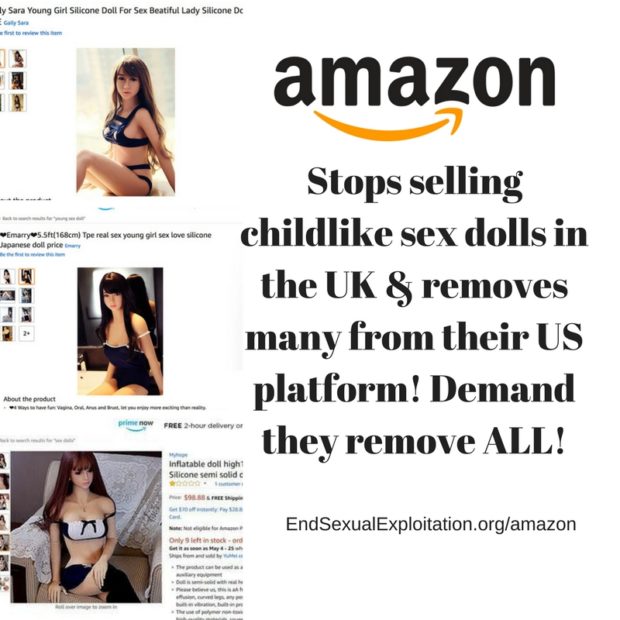 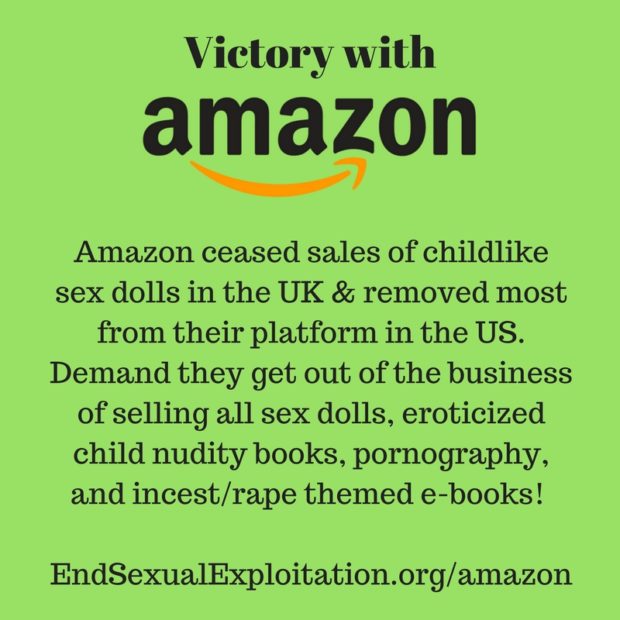 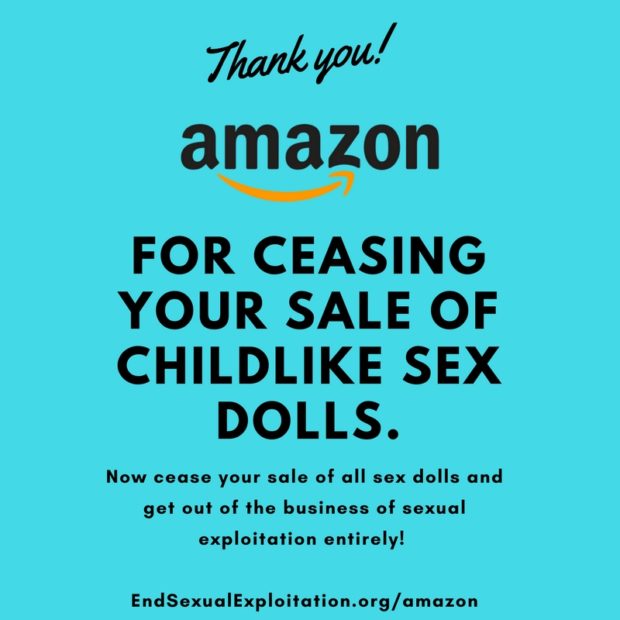 You can also send a note to their customer support here.

While Amazon is to be commended for finally removing many of these dolls the company is still profiting from sexual exploitation, with at least a dozen dolls with child-like faces on adult bodies still for sale. You can see screenshots of dolls still for sale on April 13, 2018 here.

In today’s #MeToo culture, where sexual harassment and assault are rampant, corporations like Amazon have a renewed corporate responsibility to refrain from normalizing or promoting material that promotes sexual exploitation. We request that Amazon remove all sex dolls immediately from its platform and evaluate whether or not they will continue to contribute to a culture that treats women and children as mere sex objects.

Amazon, the world’s largest online retailer, is known for selling virtually anything online for the sake of profit. In addition to the sale of child-like sex dolls, the National Center on Sexual Exploitation has complained of the sale on Amazon of photography books with eroticized child nudity, and pornographic magazines. Their Amazon Kindle e-reader is riddled with sexually explicit content containing incest, babysitter, and group-sex themes. Amazon Prime produces highly sexualized television programming and provides no means for blocking unwanted recommendations for sexually explicit programs.

At Collective Shout, we’ve been campaigning against Amazon for years. Back in 2010, after a global protest, Amazon removed The Pedophile’s Guide to Love & Pleasure: A Child-Lover’s Code of Conduct from its site, a book endorsing sexual crimes against children.

Since then, Amazon has sold a range of sexually exploitative products, including sexy nurse outfits for toddlersand pornographic, sexist and rape-themed merchandise.

Amazon’s removal of childlike sex dolls is a significant step forward, but more still needs to be done.